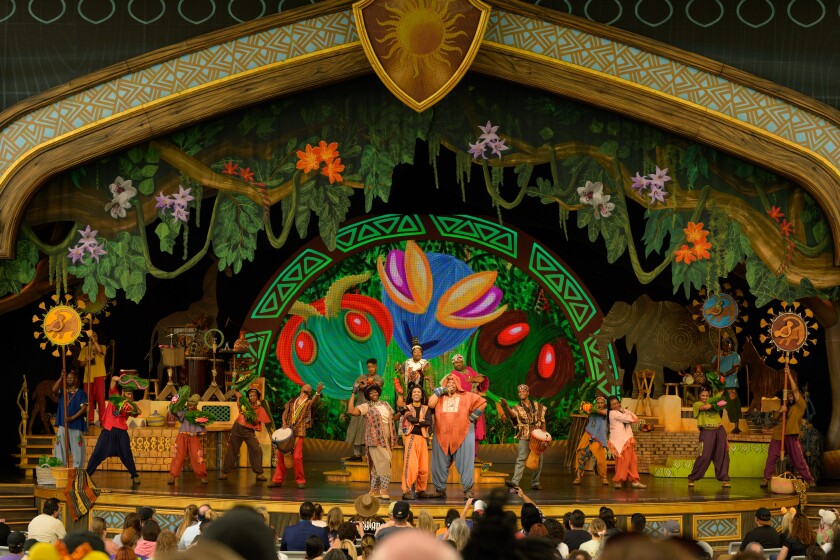 Disneyland Resort in Anaheim has come roaring back this summer with the return of live stage and interactive entertainment that includes the reboot of its “Tales of the Lion King,” as well as a celebration of African-American music and art and themed food items made with African spices and designs.

On Memorial Day weekend, Disneyland Resort also kicked off its peak visitor season with the return of its nighttime shows, which include the 50-year-old Main Street Electrical Parade, “Fantasmic!” and “Disneyland Forever” fireworks show at Disneyland, as well as its “World of Color” water and projection show at sister park Disney California Adventure.

‘Tales of the Lion King’

The “Lion King” stage show was first presented on a small side stage at Disney California Adventure in 2019, but during the pandemic-related closure the show was reconceived by creator Paul Bryant as a bigger and more authentically African show with a cast of 20, professional dancers and African drummers. Reintroduced on May 28, the show is now being presented in the much larger and semi-enclosed Fantasyland Theatre at Disneyland on Thursdays through Mondays, with performance schedules updated daily at Disneyland.com.

Bryant, who has worked on and off with Disney since 1980 and is now the “Tales” show director, said he conceived the 20-minute show not as a re-creation of the “Lion King” film or musical, but as a “story theater” production that celebrates the art of human storytelling, which he learned from his father when he was a boy. The stage show faithfully re-tells the story of Simba, the lion cub who returns from exile to lead his pack at Pride Rock, but it adds new music, drumming and additional Swahili dialogue and lyrics.

The show has no closing date, but a Disney official said it’s expected to run for “a long time.”

The costumes and scenery are African-inspired, but the new show also celebrates Black American culture. Bryant said all of the cast members are African American and they’re wearing their hair naturally. The choreography by brothers Kevin and Marcel Wilson mixes African movement with inspiration from several African American-born dance genres, including house, stepping and jazz funk. As awareness of Black culture has grown over the past two years, Bryant said he wanted the new version of the show to be a more authentic celebration than in the past.

“The cultural aspects of the show are ones that we want to sit on and own it and embrace it,” Bryant said. “It’s an open-arm experience and we’re very proud to bring it to the resort … People are really thankful that Disney has taken that step.”

In February, Disneyland Resort marked Black History Month with “Celebrate Soulfully” events that included live music and other entertainment by Black artists in the parks and in the adjacent Downtown Disney shopping and dining district. Since June is Black Music Month, Celebrate Soulfully events have returned through July 4.

There is also “The Soul of Jazz: An American Adventure,” a touring art exhibition that celebrates the history of jazz, on display through July 4 in Downtown Disney. The Disney-curated exhibit celebrates jazz music through the character of Joe Gardner, the amateur jazz musician who was the central character of the Disney animated movie “Soul.”

A taste of Africa

As a tie-in to the “Tales of the Lion King” relaunch at Disneyland, Disney’s food and beverage team have created a number of new food items for the summer.

There’s the Pride Rock Punch, made with iced tea, tamarind and pineapple, mango and orange juices; a Cardamom cold brew made with chilled coffee, brown sugar and cardamom; crispy plantain chips; Hakuna Matata Treats, a three-pack of cookies decorated with white chocolate décor inspired by the fur markings of cheetahs and zebras; a chicken-coconut curry sweet potato dish and Ethiopian berbere-spiced popcorn. The items are for sale at the Troubadour Tavern near the Fantasyland Theatre.

Later this summer, the park will also be selling a Simba collectible popcorn bucket shaped in a way that “Tales” showgoers can symbolically hold Simba over their head during the “Circle of Life” song, as he was in the movie. There are also “Lion King” totes, hats, framed artwork and other items for sale at nearby gift shops.

Because summer is peak season for visitors, all of its four outdoor nighttime shows have been revived, and in some cases updated since they were last seen in summer 2019.

Refurbished floats from the original parade — including the smoke-snorting winged dragon Elliot from “Pete’s Dragon” and the spinning turtles, snails and bugs — are still part of the parade, along with the show’s iconic original electronic score. New this year is an extra-long finale float in honor of the 1966 Disneyland ride “It’s a Small World.” The float includes 14 miniature dolls representing characters from more recent Disney animated films, including Mirabel from the just-release “Encanto,” along with Mulan, Hercules, Merida, Aladdin and Jasmine. All of the figures on the float have been designed in the style of Mary blair, the original doll designer for It’s a Small World.

An all-new fireworks show, “Disneyland Forever,” launched April 22 at Disneyland. It combines Disney film footage projected on the shop faces along Main Street and Sleeping Beauty’s Castle, as well as fireworks, falling “snow” and moving lights. When high winds prohibit the fireworks show from being presented, the park instead presents Mickey’s Mix Magic, a lights and projections show on Main Street featuring a dance party mashup of high-energy Disney songs.

“Fantasmic!” a nighttime show presented on Disneyland’s Rivers of America near the Pirates of the Caribbean and Haunted Mansion rides, marks its 30th anniversary this year. Relaunched on May 28 after a two-year absence, the show features Mickey Mouse vanquishing the witch Maleficent and a massive fire-breathing dragon with music, projections, special effects, flames and pyrotechnics.

“World of Color” also returned May 28 on the waters of Pixar Pier in Disney California Adventure park. It features music and Disney and Pixar movies digitally projected on a massive, 19,00-square-foot veil of water fountains. Rush said this returning show has changed the most since the pandemic, not so much in its content but in its quality.

The parks’ extended closure during the pandemic allowed Disney to drain the lake at Pixar Pier and repair and replace parts for the water fountains, creating a better quality “screen” of water spray, which makes the projected images much sharper to the eye, Rush said.

A taste of summer nights

There’s a colorful tray of desserts, cheeses, fruits and crackers that can be ordered from Disney California Adventure’s Carthay Circle Restaurant to enjoy in reserved seating while watching the park’s “World of Color” show.

There are also several new churro options, including a Blueberry Looks Good on You variety that’s rolled in blue sugar and served with a dipping cup of blueberry compote and cheesecake. The name is related to how the sugar temporarily turns the tongue blue. Nguyen said that since Disneyland Resort introduced churros in carts throughout the parks around 2016, it has created about three dozen new varieties of the fried Mexican desserts.

There’s also a strawberry-filled Linzer Cookie featuring the Cheshire Cat from “Alice in Wonderland” and dense “mine cart” brownies with frosting and rainbow-colored sugar and white chocolate chips on top.

And in honor of the Main Street Electrical Parade, two new novelty items are being sold this summer. There’s a “Pete’s Dragon” float-style popcorn bucket and a light-up sipper cup in the shape of the parade’s spinning turtle.

While summertime usually means larger crowds in the parks, Disney is giving locals an incentive to visit. Through Sept. 15, Southern California residents can get discounts on multiday ticket packages. Buyers must show proof they live in ZIP codes 90000-96199. The three-day, one-park-per-day ticket deal is $249 if used on Mondays-Thursdays and $299 for any day, which is a savings of up to $83 per person. The three-day park-hopper ticket, which allows visitors to visit both parks each day, is an additional $60.

Tickets/reservations: To control overcrowding in the parks, tickets must be reserved and purchased online in advance. Ticket prices vary. Adult single-park, single-day tickets for July start at $149