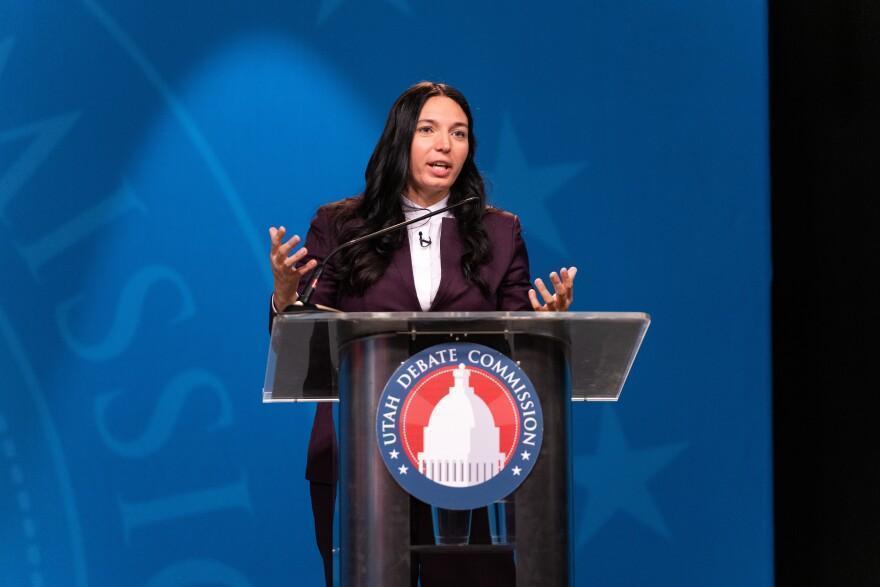 Evan McMullin’s independent Senate run raised an interesting question: Is there a viable path to victory for independent or third-party candidates in deep-red Utah?

McMullin made waves nationally. The former Republican and one-time presidential candidate turned independent challenger lost to incumbent Republican Sen. Mike Lee, but managed to get just under 43% of the statewide vote.

Although he lost, McMullin got a much greater portion of the vote than any previous Democratic challenger in recent memory. In 2016, Mike Lee dispatched Democrat Misty Snow by over 40 percentage points.

Beyond McMullin, two candidates with the United Utah Party also got over 40% of the vote in their respective races. Johny Munoz received 43% in the race for Millard County Commission and David Muir topped 43% for Salt Lake County auditor.

In recent decades, Republicans have run the table in all but a few parts of the state, most notably in Salt Lake City and the greater Park City area. The last statewide election not won by a Republican was in 1996 when Democrat Jan Graham was re-elected as Attorney General.

History shows it’s a tough road to victory for a candidate that doesn’t have the backing of a major party. Some experts say that’s largely a product of the United States’ winner-take-all election system.

“What that tends to lead to is a two party system,” said University of Utah political science professor Matthew Burbank. “And the reason is simple in that if you’ve got two parties and they compete with each other, one wins, one loses. But if you add three, four or five parties to that process, what you discover is that in the third or fourth or fifth party [will find] it very, very hard to win plurality elections.”

Burbank said the plurality system discourages third parties while encouraging factions to form within major parties — much like how conservative “Tea Party” candidates have influenced the Republican Party since 2009 or more progressive members shifting the Democratic Party platform.

In addition to the dominant parties, thousands of Utah voters are members of other third parties like the Libertarian, Independent American and Constitution parties as well as the homegrown United Utah Party.

The moderate/centrist United Utah Party was founded in 2016 by a group of people who were “aghast” at the Republican Party’s nomination of then-candidate Donald Trump for president and the GOP’s dominance in state politics. They also didn’t feel like they identified with Democrats in the state.

Chair Hillary Stirling said United Utah’s platform is not hyper-focused on rigid party stances like abortion or guns. Instead, they are more about encouraging debate and government transparency.

“We have staked out positions on some issues because you have to,” she said. “But there’s room for disagreement. There’s room for differences of opinion because as they say, if there’s a group of people and they all agree, only one person’s thinking and we need everyone bringing their best ideas for us to solve the problems before us.”

According to Stirling, the UUP currently has about 2,700 members and saw more than 250,000 votes cast for their candidates during the midterm election.

Stirling feels that Evan McMullin did United Utah a huge favor by showing voters an alternative.

“[McMullin] created the conversation about there’s something other than left and right,” said Sterling. “We can meet in the middle. We can do that. We can shake hands at the end of the day, even if we’re not on the same page ideologically.”

But that momentum still might not be enough to win elections. Brigham Young University political science professor Jeremy Pope said for a third party to be successful, it really needs a specific issue that sets them apart from Republicans and Democrats.

“They’re going to have to figure out some sort of issue that really mobilizes people,” said Pope. “It has to be fairly specific to Utah. And worst of all, it has to overcome the sort of natural tendency towards the basic set of issues that the national parties are focused on. And to be honest, I think the probability of that happening is very, very, very low, bordering on zero. I just don’t see how it could occur.”

Per Utah law, any political party can access the ballot if they can collect at least 2,000 signatures or obtain at least 2% of the total votes cast for all U.S. House candidates in one of the last two general elections. The party must also notify the Lt. Governor’s Office of its intent to field candidates.

The best way for a third party to gain ground in state politics is to focus on municipal elections, Burbank pointed out. In Utah, races for city council and mayor are nonpartisan and candidates don’t campaign as Republicans and Democrats.

That means the lowest-level race a UUP candidate could win is at the county level.

“[People could] say, ‘why should I vote for this party?” he said. “Well, this person who is on the Salt Lake City Council or Davis County Council or whatever it is did a great job. I really liked them. I could consider voting for that party for a governor or senator or whatever else it might be.’”