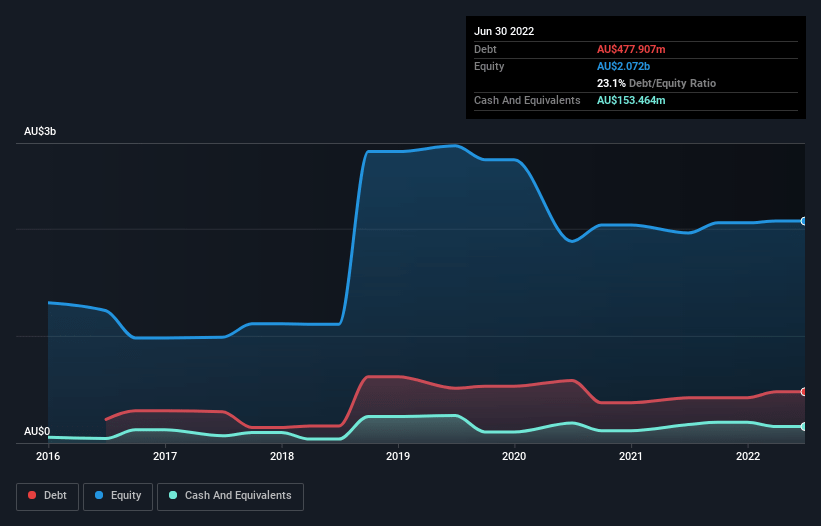 Howard Marks put it nicely when he said that, rather than worrying about share price volatility, ‘The possibility of permanent loss is the risk I worry about… and every practical investor I know worries about.’ It’s only natural to consider a company’s balance sheet when you examine how risky it is, since debt is often involved when a business collapses. We note that Nine Entertainment Co. Holdings Limited (ASX:NEC) does have debt on its balance sheet. But is this debt a concern to shareholders?

Why Does Debt Bring Risk?

Debt assists a business until the business has trouble paying it off, either with new capital or with free cash flow. Part and parcel of capitalism is the process of ‘creative destruction’ where failed businesses are mercilessly liquidated by their bankers. However, a more usual (but still expensive) situation is where a company must dilute shareholders at a cheap share price simply to get debt under control. Of course, the upside of debt is that it often represents cheap capital, especially when it replaces dilution in a company with the ability to reinvest at high rates of return. When we think about a company’s use of debt, we first look at cash and debt together.

Check out our latest analysis for Nine Entertainment Holdings

What Is Nine Entertainment Holdings’s Debt?

You can click the graphic below for the historical numbers, but it shows that as of June 2022 Nine Entertainment Holdings had AU$477.9m of debt, an increase on AU$421.9m, over one year. However, because it has a cash reserve of AU$153.5m, its net debt is less, at about AU$324.4m.

While this might seem like a lot, it is not so bad since Nine Entertainment Holdings has a market capitalization of AU$3.16b, and so it could probably strengthen its balance sheet by raising capital if it needed to. But it’s clear that we should definitely closely examine whether it can manage its debt without dilution.

Nine Entertainment Holdings’s net debt is only 0.54 times its EBITDA. And its EBIT covers its interest expense a whopping 20.7 times over. So you could argue it is no more threatened by its debt than an elephant is by a mouse. On top of that, Nine Entertainment Holdings grew its EBIT by 37% over the last twelve months, and that growth will make it easier to handle its debt. There’s no doubt that we learn most about debt from the balance sheet. But it is future earnings, more than anything, that will determine Nine Entertainment Holdings’s ability to maintain a healthy balance sheet going forward. So if you’re focused on the future you can check out this free report showing analyst profit forecasts.

Finally, a company can only pay off debt with cold hard cash, not accounting profits. So it’s worth checking how much of that EBIT is backed by free cash flow. Over the last three years, Nine Entertainment Holdings recorded free cash flow worth a fulsome 81% of its EBIT, which is stronger than we’d usually expect. That positions it well to pay down debt if desirable to do so.

The good news is that Nine Entertainment Holdings’s demonstrated ability to cover its interest expense with its EBIT delights us like a fluffy puppy does a toddler. But, on a more sombre note, we are a little concerned by its level of total liabilities. Looking at the bigger picture, we think Nine Entertainment Holdings’s use of debt seems quite reasonable and we’re not concerned about it. After all, sensible leverage can boost returns on equity. When analysing debt levels, the balance sheet is the obvious place to start. But ultimately, every company can contain risks that exist outside of the balance sheet. Be aware that Nine Entertainment Holdings is showing 1 warning sign in our investment analysis , you should know about…

If you’re interested in investing in businesses that can grow profits without the burden of debt, then check out this free list of growing businesses that have net cash on the balance sheet.

Have feedback on this article? Concerned about the content? Get in touch with us directly. Alternatively, email editorial-team (at) simplywallst.com.

This article by Simply Wall St is general in nature. We provide commentary based on historical data and analyst forecasts only using an unbiased methodology and our articles are not intended to be financial advice. It does not constitute a recommendation to buy or sell any stock, and does not take account of your objectives, or your financial situation. We aim to bring you long-term focused analysis driven by fundamental data. Note that our analysis may not factor in the latest price-sensitive company announcements or qualitative material. Simply Wall St has no position in any stocks mentioned.

Valuation is complex, but we’re helping make it simple.

Find out whether Nine Entertainment Holdings is potentially over or undervalued by checking out our comprehensive analysis, which includes fair value estimates, risks and warnings, dividends, insider transactions and financial health.