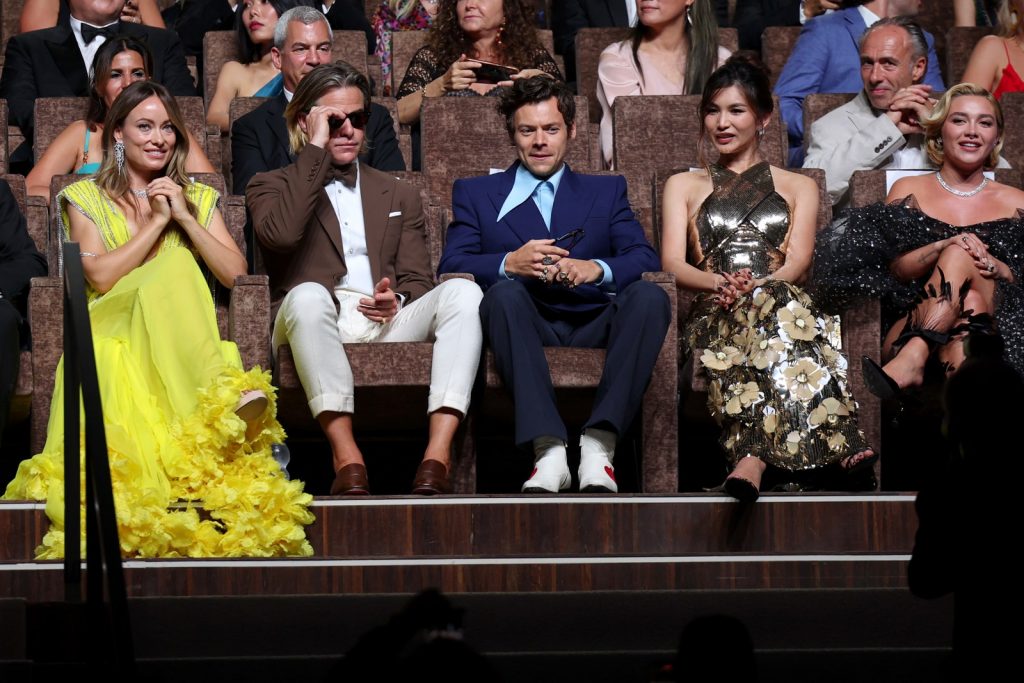 Make no mistake: there is an enormous amount of chatter about Don’t Worry Darling, director Olivia Wilde’s sophomore feature, as tension surrounding the film and its stars—among them Florence Pugh, Harry Styles, and Chris Pine—erupted during its Venice Film Festival premiere over the weekend. Set against Venice’s seaside glamor, the loud silences, speculated expectorations, and pointed Instagram captions take on a new patina, turning the whole deal into a sort of high-fashion, high-drama cinéma vérité spectacle.

But there is one thing we don’t need to worry about on the Don’t Worry Darling front: boring red carpet fashion. The movie’s leading men—Styles, Pine, plus comedian Nick Kroll—are all bringing their own kooky, classic, and suave takes on formalwear for the occasion.

Styles and Pine, who many or may not have exchanged a strangely invective interaction after the credits rolled, wore almost opposing interpretations of the retro-modern suit to the premiere. Styles, still in his groovy Harry’s House bag, rolled up in head-to-toe Gucci; the exaggerated lapels the size of ice cream cones (sugar, not wafer) of his baby blue shirt drooped over his navy double-breasted, exaggerated-shoulder jacket, which all felt very Harry Goes Gucci Goes Hollywood. (Wilde, who is dating Styles, also wore a full Gucci look, and the label’s creative director Alessandro Michele walked the carpet.) Kroll, introduced a third shade of blue into the mix with his cobalt Dolce & Gabbana tux.

Meanwhile, Pine continued his streak as Hollywood’s freakiest gentleman in a cocoa brown Ralph Lauren jacket and matching bowtie, as well as a pair of classic Ray-Bans that wound up at the center of the drama. But that’s another worry for another day.