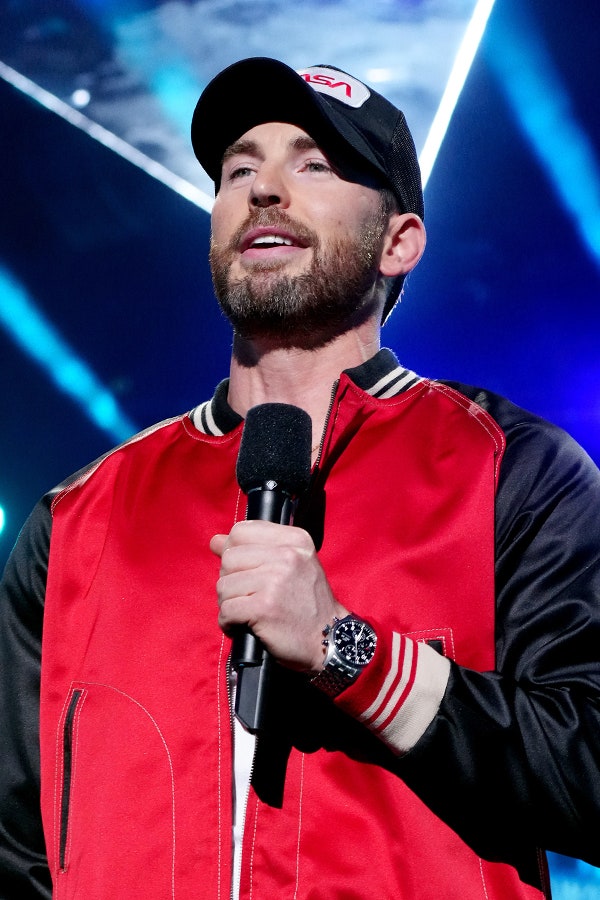 The Cartier Tank has been around for more than a century, during which time it’s taken on nearly every material, color, and shape imaginable. The phrase aging like fine wine no longer does it justice—even the finest wines would be musty after this long. And yet the Cartier Tank continues to prove its endurance and elasticity. Color, or the absence of it, has been the key to the Tank’s recent reinvention. Over the past two years, Cartier has painted the dial of the Tank in forest green, burgundy, navy blue, and even a stark black. Still, the best of the bunch might be the Tank Louis Cartier Dwyane Wade wore to the Time100 gala this week. The combination of gold and deep red was an instant winner—not totally unlike Wade himself.

Chris Evans is on the circuit promoting his role voicing a hunky Buzz Lightyear in the new movie Lightyear. Fittingly, the actor is wearing a watch designed for flying, or falling with style. Evans’s chunky IWC is a quintessential pilot’s watch: a large triangle at 12 o’clock, large legible numerals, and a chronograph (or stopwatch) for timing purposes.

Somehow, launching a watch into space isn’t the most outrageous thing Jacob & Co. did over the past couple of weeks. The brand also announced this Epic X Tourbillon Baguette that carries a total of 550 diamonds across its dial, bezel, case, and bracelet. All those diamonds clock in at a blinding 77 carats. It’s fitting to see the watch on the wrist of Marvel star Liu—the watch looks like something a superhero would unlock at the end of their mystical journey and use to defeat their nemesis.

The Mayor of Flavortown knows how to choose the sauciest watch. This yellow-gold Yacht-Master with its blueberry bezel is to outfits what Donkey Sauce is to food—an overwhelming presence. But the watch isn’t even the highlight of Fieri’s look. As Trey Kerby, one of the hosts of NBA podcast No Dunks, pointed out on Twitter, Fieri is also wearing a Guy’s Grocery Games championship ring. This isn’t some cheap novelty, either: the outer edge of the ring is set with diamonds.

Last weekend, Rafael Nadal wrapped up his 14th French Open win and 22nd Grand Slam title, extending his lead as the all-time record holder. Those are the types of accomplishments that earned Nadal his very own series of watches from Richard Mille. For this tourney, the Spaniard wore the RM 27-04 which features steel cables criss-crossing across its dial to replicate the look of a tennis racket. No one ever accused Richard Mille of subtlety.