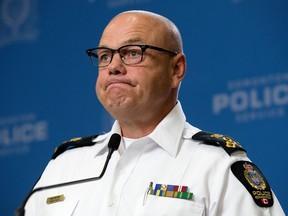 The Edmonton Police Service and its oversight body will work on a framework for using technology to seek investigative tips after the release of a “highly generalized” image of a Black man through DNA phenotyping drew public criticism.

Enyinnah Okere, chief operating officer of the EPS community safety and well-being branch, outlined to the Edmonton Police Commission on Thursday the decision-making behind the release of the photo based on DNA obtained from a 2019 sexual assault investigation that had gone cold.

Sign up to receive daily headline news from the Edmonton Journal, a division of Postmedia Network Inc.

A welcome email is on its way. If you don’t see it, please check your junk folder.

The next issue of Edmonton Journal Headline News will soon be in your inbox.

We encountered an issue signing you up. Please try again

It garnered backlash from the public for broadly characterizing a Black suspect, and stigmatizing as well as criminalizing racialized groups. Days after, EPS walked back the release of the image.

Okere told the commission that the image did generate new tips for the case, which investigators are following up on.

“However, and let me be clear, there was also some unintended harm that came up with the release of a highly generalized computer-generated image and that’s the heart of the issue here,” Okere said. “The nature of this crime, the fact that this woman was racialized and marginalized, does not make the impact of the generic photo had on our city’s Black community OK.”

As a result of the criticisms, Okere said the service is aiming to create a “more robust consultative process to better understand the use of new technologies and the potential impact that may result.”

The service will be updating its ethics review process to ensure it adheres to a number of guidelines, including, but not limited to, that there is a clear demonstration of public safety interest, the actions are consistent with legal framework, there is clear evidence of the utility of the technology and its limitations before proceeding, and EPS will regularly review and assess the use of these technologies.

Commissioners approved a motion for EPS to provide a draft proposal for a committee comprised of members of the chief’s community council, commissioners, and others to “assess the use of current technology and future technologies” and provide reports to the police commission’s standing IT committee.

Speaking to reporters following the commission meeting, Edmonton police Chief Dale McFee said the use of any new technology needs to be balanced with input from the community with the ability to solve crime and help victims of crime.

“That’s what I like about that is to get together, build a straw dog of what that actually looks like as a best practice and a mechanism to ensure that we have that buffer going forward,” he said. “That’s what we’re looking at. Are we going to release any more generic pictures right now? No.”

The commission also heard a presentation by Statistics Canada on the collection of race-based data.

StatsCan is working on guidelines for collecting race-based data for police services to use, with the aim for a full rollout in 2024.

Sean Tout, executive director of the EPS information management and intelligence division, said the service will first utilize the criteria for race-based data collection in instances where people self-identify their race. He said EPS is aiming to have a new records management system in spring 2023, with officers trained in the collection of the data by the fall.

The data will be reported to StatsCan once it is ready to receive it, likely in early 2024.

McFee said race-based data would help identify if a particular race is over-represented.

“Plus, it gives us a better accurate reflection of what we’re actually dealing with in the community,” he said. “And it’s something that the racialized minority communities are asking for.”

The commission also moved a motion to write a letter to the Alberta government advocating for the collection of race-based data.