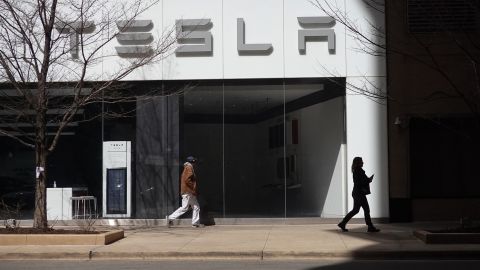 Jason Simon placed an order for a Tesla Model 3 this April, eager to own an electric vehicle.

He heard from Tesla in June that his car was ready, but he backed out of the purchase, losing the $250 order fee he paid. Simon told CNN Business his feelings changed this spring after Tesla CEO Elon Musk struck a deal to buy Twitter. Musk has since backtracked and indicated that he wants out of the deal to purchase the social media company.

Simon is one of many electric vehicle buyers who have developed new, stronger feelings about Musk and Tesla in recent weeks.

Driving a Tesla has long been a way for consumers to signal values on the environment and sustainability.

Consumers connect deeply with brands that share their values, or represent what they aspire to be, according to Americus Reed, a marketing professor at Wharton School of the University of Pennsylvania. Tesla has benefited from a powerful, identity-based loyalty that’s emerged with car buyers, and it rivals top brands like Apple and Nike.

“The intensity of the relationship for those that are really into Tesla is off the charts,” Reed said.

Some car buyers are increasingly drawn to, or away from, Tesla, because of a range of beliefs that align or clash with Musk, including politics, freedom of speech, and company culture, according to interviews with 12 recent car buyers.

In recent months Musk has called Democrats the party of “division & hate,” joked about putting cocaine back in Coca-Cola, compared Twitter’s CEO to Joseph Stalin, challenged Russian president Vladimir Putin to a one-on-one fight for Ukraine, and warned that “the woke mind virus will destroy civilization.”

Simon said he felt for the Tesla employees who had stock in the company. Tesla stock has fallen 31% since Musk struck a deal to purchase Twitter. The S&P 500 has fallen 11% in the same timeframe.

Simon thought the falling stock price suggested a lack of confidence in Tesla as its busy CEO — Musk also leads SpaceX — took on another project. While Musk has since said he wants out of the deal, he now potentially faces a lengthy court battle if Twitter chooses to bring legal action against him.

“There’s people down the line that aren’t him that worked a long time to earn that stock,” said Simon, a business executive in Philadelphia who said he’s “deadly serious” about his employees getting chances to earn.

Steven Kronenberg of California canceled an order for a Tesla solar roof this spring after seeing Musk announce his support of Republicans.

He also said he didn’t like seeing Tesla face a lawsuit from a California civil rights agency for its treatment of Black workers.

“If someone wants to spend money at Hobby Lobby, or Chick-fil-A or Tesla, they can do that,” Kronenberg told CNN Business. “I have plenty of other options.” (Chick fil-A had donated for a time to organizations that were critical of same-sex marriage and Hobby Lobby was at the center of a Supreme Court ruling that the Affordable Care Act couldn’t force closely held companies to cover certain contraceptives for employees.)

Businesses have historically seen some impact from taking political stances. Budweiser appears to have lost popularity in conservative counties after its 2017 Super Bowl ad favored immigration, while Ben & Jerry’s gained support in liberal countries for its support of same-sex marriage and Black Lives Matter, according to Vanitha Swaminathan, a marketing professor at the University of Pittsburgh.

Reed, the Pennsylvania professor, described Musk as a “lightning rod” that people either love or hate. He views Musk and Tesla as immune to damage from Musk’s recent behavior because people are already so split over him. Musk can benefit from provoking strong feelings, rather than indifference.

“If you’re a public figure it’s probably better to be edgy,” Reed said. “Like, eh, whatever, the CEO of Ford, who cares?”

Swaminathan said that Musk’s potential risk to Tesla’s sales and brand may not be too significant as the automaker has a strong brand and is known for its innovativeness.

“Tesla’s own brand reputation could act as an insurance policy and limit the damage that the CEO’s position has on the brand,” Swaminathan said.

Erik Corkran of Colorado has long been fond of Musk, whom he views as an inspirational voice for individual freedom. Corkran, who leans libertarian, said he likes to be unbounded, and has done much freelance work in his career. He loves his Tesla Model X that he bought earlier this year.

Corkran said he cares about social justice topics like gender and race, but he feels they are becoming too large a focus in schools at the expense of math or science. Corkran watched this spring as Musk encountered a backlash as he moved to purchase Twitter and weighed in on politics.

“You know what,” Corkran said he recalled thinking in May. “I’ll throw down $100. I’ll get a Cybertruck.” While Tesla’s Cybertruck is not yet available – production was initially said to start in late 2021 but it has been delayed until 2023 – potential buyers can reserve the opportunity to purchase one for a $100 deposit.

He’s hoping to get delivery in 2024, when Musk has said the truck will be available.

Lisa Morris, who lives in Louisiana, ordered a Tesla this year to save on fuel costs during a long drive she frequently makes to get her granddaughter from school. She said she’ll be the first of her friends to own a Tesla.

Morris has strong feelings about politics, and says as a businessperson she would “rather have 1,000 Republican customers, than 100,000 Democrat [customers].”

Morris said she was even happier with the purchase after Musk announced he would no longer support Democrats.

“The man should keep doing it and never hold his opinion back,” said Morris, who added that she doesn’t respect businesses that hide their support of Republicans.

Scott Wilson of California, who owns a Model Y, placed an order for a second Tesla this year. But he said he’s had second thoughts, and he considered canceling the order.

For now, Wilson has kept his order. He said it’s helped that Musk has seemed calmer on Twitter the past couple weeks.

Other car buyers say Musk’s efforts outside Tesla and his political views don’t factor at all into their decisions.

Steven Cohn, who purchased a Model 3 this year, said he views Musk as the American dream, and admires what he’s done to fight climate change. But he also finds Musk’s political views to be “a little on the regressive side.”

“I’ll make my purchase decisions based on what I feel is the best value for me and my family,” Cohn said. “Not based on a political party.”