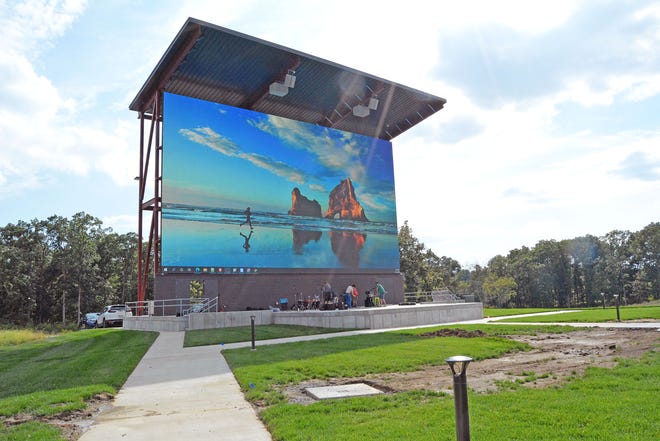 Lakeside Ashland, the outdoor entertainment venue brainchild of developer Nic Parks in in southern Boone County, is about one more month away from its grand opening.

There remain a few final things to complete in the first construction phase at the site, such as finishing kitchen space and getting other infrastructure in place.

Now with restrooms operational and space on site for food trucks and other vendors, the ticketed venue has launched a soft-opening phase, Parks said. The first events were last weekend, including a University of Missouri football game watch party.

“Sidewalks, more sod and just finishing touches,” Parks said about what is left. “The screen is good. The parking lot is good.”

Delays are primarily related to construction or other permanent infrastructure being delivered, such as a transformer for the zipline’s power and a permanent sewer pump station. A temporary one is in place currently.

“I’m content. If we were sitting in November and I could not have opened, I would have been pretty frustrated,” Parks said.

The first full season for Lakeside Ashland is expected to come next year, likely running from the end of February through the end of November, based on a conditional use permit approved by the Ashland Board of Aldermen last year.

On Friday afternoon, Parks was in the process of setting up for the Tigers on the Prowl Art and Music Festival at the venue when he spoke with the Tribune. The charity event focused on showcasing “the work of artists … (and providing) a platform for local charities to raise awareness and funds,” according to a promotion for the event.

A movie event at the property on Saturday was in support of Lizzie’s Walk of Faith Foundation, which held its annual 5K Saturday at Twin Lakes Recreation Area.

Lakeside Ashland will be at about half-capacity for events hosted over the next month, Parks said. The site will be fully ready to open by about mid-October, he said.

It will take until then to finish up a playground area for children, a concession kitchen and upstairs bar area all next to the main parking lot for the venue.

Concessions could reach a point of serving soft drinks, beer and popcorn earlier, but the full kitchen should be ready to go by mid-October, Parks said.

Depending on how weather shakes out, Parks is hopeful for another month of events at full capacity taking the site into the end of its season in November.

“The events we do from mid-October to mid-November — some holiday and Halloween movies — I think we’ll be ramped to full capacity, which is 250 parking spaces and about 800 people,” Parks said Friday. “Tonight it will be about 400 people. We want to wait to go full on until another month or so.”

The venue is not without controversy among neighbors along Log Providence Road. Lakeside Ashland is at the entrance point to the neighborhood of more than 60 homes.

Log Providence is the only way in or out of the neighborhood.

“Several of the neighbors have been out here during the open house and things like that,” Parks said, adding he has received silent support from some of them. “… It’s good to hear those things. At times it feels like it is me vs. them, but to hear some are supportive is really good.”

For those with objections, Parks still would welcome a dialogue, he said.

The true test for the neighbor concerns of traffic bottlenecks and emergency access in or out will come once the venue is at full capacity.

The venue has the ability to internally queue up to 50 vehicles, he added, addressing the traffic bottleneck concerns.

“(The traffic into the venue) should never get to the point where there is a back-up. We’ll never sell past our parking capacity, where people would park on Log Providence. That is never going to happen,” Parks said.

Charles Dunlap covers local government, community stories and other general subjects for the Tribune. You can reach him at cdunlap@columbiatribune.com or @CD_CDT on Twitter. Please consider subscribing to support vital local journalism.