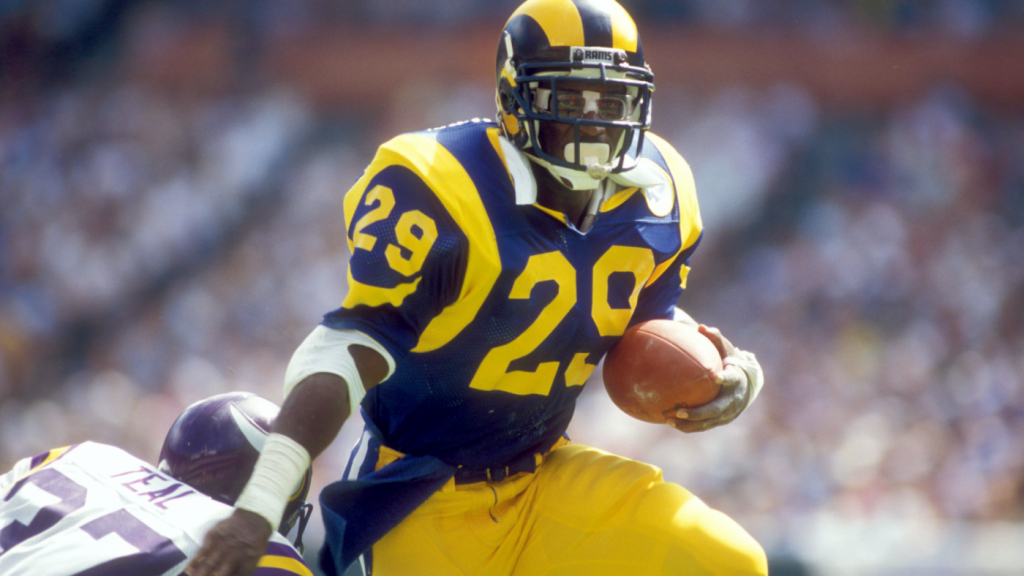 Eric Dickerson has been called may things over the years. Being bashful isn’t one of them. Aways one to voice his opinions, Dickerson’s breathtaking runs during his college and pro careers were more jaw-dropping than some of his newsworthy headlines.

Part of SMU’s “Pony Express” backfield with Craig James, Dickerson didn’t share a backfield, or take a backseat, to any other back during the ’80s. One of the NFL’s best players during the 1980s, Dickerson dominated the gridiron while carving out a career that was ultimately immortalized in the Pro Football Hall of Fame. Dickerson was the focal point of John Robinson’s 47-Gap, one of the most devastating players in NFL history.

Here are five fast facts about Dickerson, who recently celebrated his 62nd birthday.

Dickerson’s rookie season has stood the test of time. During the ’83 season, Dickerson rushed for a rookie record 1,808 yards while winning the first of his four rushing titles. He also ran for 18 scores while ripping off the season’s longest run, an 85-yard score against the New York Jets.

The only player that has come semi-close to matching Dickerson’s rookie record is Cowboys running back Ezekiel Elliott, who ran for 1,631 yards (third all-time) during the 2016 season.

Dickerson didn’t only duplicate his rookie success in 1984, he exceeded it. The 6-foot-3, 220-pound Dickerson rumbled for 2,105 yards, which continues to stand as the NFL’s single season record. In the Rams’ second-to-last game of the season, Dickerson broke the mark currently held by O.J. Simpson, who ran for 2,003 yards in the 14-game 1973 season.

Five running backs have rushed for over 2,000 yards since Dickerson’s record-setting campaign, with Adrian Peterson coming the closest to passing his mark with his 2,097 yard season in 2012.

A Texas native, Dickerson put on a show against the state’s most popular team during the divisional round of the 1985 playoffs. He carried the ball 34 times for a still-standing playoff record 248 yards and two touchdowns in the Rams’ 17-0 win. Making Dickerson’s performance even more notable is the fact that he did so much damage despite the fact that his quarterback that day, Dieter Brock, threw for 50 yards on 6 of 22 passing.

Dickerson was unable to mask the Rams’ deficiencies a week later in the NFC Championship Game. Facing the fabled Bears’ 46 defense, Dickerson and his teammates were shutout by the eventual Super Bowl champions.

Dickerson was traded from Los Angeles to Indianapolis during the 1987 season. During his first full season in Indianapolis, Dickerson became the first and only player to win rushing titles for two different franchises. He ran for 1,659 yards while helping the Colts post their second winning season since 1977. The first winning season over that span took place during Dickerson’s first season in Indianapolis, when he rushed for 1,011 yards in nine games after being traded.

Dickerson is one of 86 Hall of Famers who were inducted in their first year of eligibility. A member of the Colts’ Hall of Fame, Dickerson received a Super Bowl ring from the Rams after St. Louis defeated the Titans in Super Bowl XXXIV. His No. 29 has also been retired by the Rams. The accolades continued for Dickerson in 2019, when he was named to the NFL’s 100th Anniversary All-Time Team.