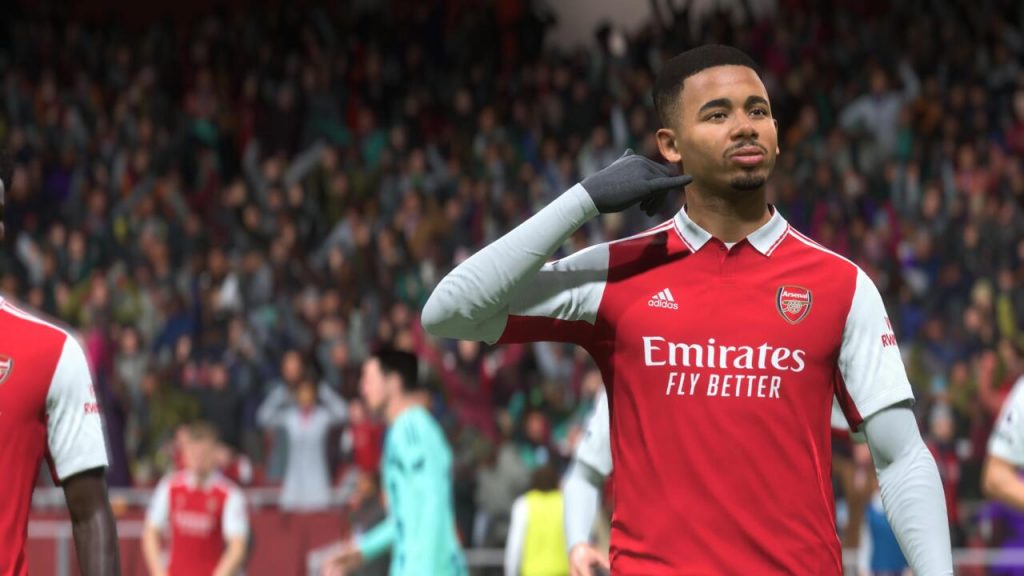 FIFA 23 marks the end of an era for the long-running series. After an almost 30-year partnership that began with players like David Platt gracing the cover, EA Sports has parted ways with football’s governing body over a licensing disagreement. Future games in the series will now drop the FIFA name in favor of a new EA Sports FC moniker. Not that you’d be able to tell from playing FIFA 23, mind you. Despite being the last game adorned with the household name, it’s business as usual both on and off the pitch for EA’s latest footballing sim. There are a few new additions spread across its various game modes–and Ultimate Team sees its most significant change in years–but for the most part, FIFA’s swansong is a game of minor iterations.

This begins once you step out onto its exquisitely rendered grass, with the introduction of HyperMotion2 ensuring that each and every match in FIFA 23 looks and feels more authentic and immersive. This innovative technology first appeared in last year’s game and allowed the developers to motion capture all 22 players in a real-life match. By capturing every minute detail and context-specific action across a full 90 minutes and implementing it into FIFA’s gameplay, there was a plethora of new animations that edged the simulation closer to reality. With HyperMotion2, FIFA 23 simply expands on its predecessor by obtaining even more data from both full-length matches and training sessions with professional teams. This means that players move across the pitch, collide with each other, and strike the ball with increased fluidity and an added sense of realism.

The impact this has on gameplay is palpable, most notably in regards to the game’s overall pace. I said the same thing last year, but FIFA 23 is considerably slower than its precursor. Fleet-footed players can still be devastating, but they work best in short bursts, using their acceleration to gain a yard of space or dashing past a static back line. For the most part, goals are created through sweeping passing moves. Picking out a teammate is more consistent this time around, and there’s a responsiveness and satisfying zip to passes that constitutes genuine excitement when you’re able to spray the ball around to create openings and eventually finish a move off with the ball nestled in the bottom corner. To counteract this, defenders feel more intelligent in regards to their positioning, and successful tackles frequently end with you actually regaining possession. Jockeying is also an effective avenue for winning the ball back, especially when using a stronger player who’s able to utilize their strength to great effect, and slide tackling finally feels viable again.

Despite these changes, FIFA 23 doesn’t feel like a significant leap forward over last year’s game. It’s very much a case of incremental improvements on what was previously established, so it’s still a good game, just not one that feels particularly new. In fact, one of the only new additions is the advent of power shots, which see your player take an exaggerated wind-up before launching the ball towards goal in thunderous fashion. The dramatic zoom-in that accompanies each wind-up makes the power shot feel like it belongs in Mario Strikers or Captain Tsubasa rather than the latest FIFA, but there’s no more satisfying way to score a goal in FIFA 23. Most of the time, however, it takes so long to fire off one of these shots that you’ll be dispossessed before the ball can even leave your foot. And when it does, accuracy varies, from pinpoint screamers that fly into the top corner to wild lashes that end up closer to the corner flag. This creates an inviting element of risk and reward where there might be better and safer options, but nothing beats piledriving a shot that the net can barely contain.

Other new additions are similarly positive. The women’s game features more prominently than ever before, with the inclusion of club football joining the assortment of international teams that have been in the game since FIFA 16. There are only two leagues to choose from–the English Women’s Super League and French Division 1 Arkema–but finally being able to play as clubs like Chelsea and Lyon is a long overdue addition. HyperMotion2 was also used to capture women’s football, so players like cover star Sam Kerr and Arsenal striker Vivianne Miedema move as you would expect and feel distinct from their male counterparts. The only downside is that you can only use women’s teams in friendlies and tournaments, so you can play through a full season in either division, but you’re restricted to a single campaign and aren’t able to purchase players or engage in any of the other amenities found in FIFA’s career mode.

Speaking of which, career mode is much the same as before. One of the new features lets you take part in playable highlights of games rather than having to play through the full 90 minutes, ensuring that you still have an impact in matches you’re simulating. If you opt for a player career, you can now ostensibly shape their personality to receive buffs for certain attributes. Assisting a teammate will generate Heartbeat points, for instance, whereas holding on to the ball and scoring yourself will generate both Maverick and Virtuoso points. These points will then boost attributes related to each personality style, whether it provides a bump to dribbling and finishing or crossing and ball control. You can also spend in-game money to gain additional points by, say, donating to a charity or purchasing an expensive watch. It’s a binary system that uses the word “personality” very loosely, but it’s a step in the right direction, even if it mostly fades into the background and doesn’t drastically change the feel of career mode.

In a PR savvy move, AFC Richmond is also a playable team in FIFA 23. You’ll see Ted Lasso patrolling the touchline and emerge from the tunnel with a lineup featuring the likes of Roy Kent and Jamie Tartt. It’s a fun gimmick for fans of the show, although it doesn’t really go anywhere beyond the visuals. You can select Richmond in career mode and stick them in the Premier League, but press conferences still use the same generic answers, so don’t expect any Ted-specific lines. Selecting Richmond also puts you in a bit of a hole to begin with because the squad is so small. The bench and fullback positions are filled by generic players in lieu of there not being enough characters in the show, but it feels like an oversight that there aren’t more of them. You need to spend your first transfer window buying backups for nearly every position, so being able to use Richmond in career mode doesn’t seem particularly well thought out.

Of course, EA’s primary focus in FIFA 23 is Ultimate Team. The annual money-maker has reworked its chemistry system this time around, with the maximum possible chemistry your team can reach now 33 instead of 100. You’re still rewarded for having teammates that share leagues, clubs, and/or nationalities, but these players don’t need to be adjacent to one another in order to receive the attribute boosts. Crucially, there’s also no punishment for fielding a player with zero chemistry. You can stick Messi on the wing in a team that’s otherwise comprised of Serie A players and his attributes won’t suddenly decrease because there are no Argentine or PSG players near him. This transforms Ultimate Team into the fantasy football game mode it was initially billed as. Cards that very few people would have used previously will now be viable because you don’t have to worry about their links to other players in your team. Your squad has the potential to be more diverse and unique to you, while the decision to amend position modifier cards is also a positive one. In FIFA 23, these cards can only be used to move a player to their real-life secondary position, putting an end to teams deploying five strikers across the midfield with no negative consequences.

The only downside of this chemistry revamp is the effect it has on Squad Building Challenges (SBCs). Previously, you could stick players in any position and achieve just enough chemistry via their shared nationality and other factors to be able to submit the squad. That’s more difficult now because players used outside of their natural position account for zero chemistry, and the requirements for some of these SBCs ask you to submit a squad where the chemistry rating of each player is at least one or two. This feels like another move designed to entice players into buying packs in order to acquire more cards that might potentially be useable in different SBCs. It’s a sure sign, if you ever needed one, that the predatory aspects of Ultimate Team aren’t going away anytime soon. The issue of pack transparency is still obfuscated, and those who spend the most real money will end up with the best teams.

The addition of Moments does at least give you another avenue to acquire packs without spending a dime. These are bite-sized challenges that vary in difficulty, tasking you with scoring a hat-trick with Mbappe or curling a free kick in from 30 yards out. Their quick-fire nature makes it easy to accrue rewards after an hour or so, and it also proves to be a decent learning tool for newcomers. The only downside is that you’re taken back to the Moments menu in between each challenge rather than immediately jumping into the next one–like you’re able to on Madden. This minor annoyance isn’t enough to detract from what is an enjoyable new addition, though.

FIFA 23 is a fitting end to an era, successfully capturing the essence of the beautiful game alongside the disheartening practices of the profit-hungry vultures circling overhead. It’s as much about greed as it is about scoring a screamer. A game where the on-pitch action has been refined with slicker passing, more effective defending, and myriad animations that bring it all to life, yet the shadow of gambling looms over it all. This has been the case since Ultimate Team was introduced 14 years ago, so none of this comes as a surprise. And with the next World Cup taking place in Qatar–a country known for sports washing its human rights record–it’s all par for the course when it comes to football. The age of FIFA might be coming to an end, but EA Sports FC is likely to kick off in much the same way: offering a fantastic game of football that’s otherwise consumed by an exploitative cash grab.