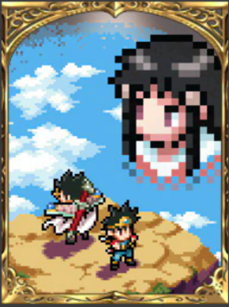 Square Enix’s mobile game, Final Fantasy Brave Exvius, is collaborating with the classic Dragon Quest manga, The Adventure of Dai. Players will have the opportunity to obtain a limited-time Neo Vision units: Hero Dai, Martial Artist Maam, and Mage Popp. Players will also be able to join in other activities to earn vent-limited rewards and more during the event period.

From now until June 22, players will have the chance to unlock Dragon Quest: The Adventure of Dai collaboration Neo Vision units: Hero Dai, Martial Artist Maam, and Mage Popp. You can also unlock a guaranteed step 3 NV unit, and if players perform three summons from Step 1 to Step 3, their fourth summons on Step 4 can be performed for free.

The collaboration event that started on June 2 will include a raid event, “Decisive Battle at Sovereign Rock Castle!” and a challenge event called “VS Mystvearn.” For the Decisive Battle at Sovereign Rock Castle! you’ll have the chance to earn Sovereign Rock Castle Raid Coins and use them to unlock NV EX Ticket (3-star/4-star/5-star/NV), Super Trust Moogle Exchange Ticket. You’ll also have the chance to obtain special collaboration equipment like Knife of Papnica (Wind), Popp’s Garb, and Dai’s Clothes. Players who collect enough points will be eligible for rewards such as Guaranteed Ticket (4-star/5-star/NV) and the special equipment: Beast King Armour!.

The “VS Mystvearn” event will run until June 22, and players will be tasked with defeating enemies and clearing the mission. If the mission is completed, they’ll be rewarded with fragments, NV EX Ticket (3-star/4-star/5-star/NV), Mystery Crystal, and the event-limited Vision Card “Power Cut!!!”.

Players will also be able to join in on the daily character challenge event “Character Battle I” until June 15. All they’ll need to do is log in, and they’ll have the chance to obtain EX Awakening materials to awaken the free NV unit Beast King Crocodine. The log in bonuses will also include Guaranteed Ticket (5-star/NV) x1,10+1 Summon Ticket (3-star/4-star/5-star/NV) x1, Transcension Pearl x1, and more.

Final Fantasy Brave Exvius is a free-to-play mobile game that can be downloaded on the Apple App Store, Google Play, and Amazon App Store.