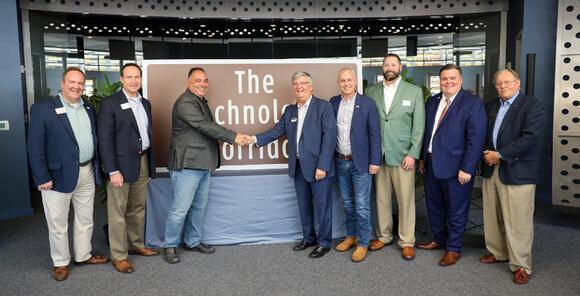 Early in 2022, the Georgia state legislature officially named the section of SR 400 stretching from Mansell Road on exit 8 to SR 20 at exit 14 as The Technology Corridor. This area of road contains the highest concentration of technology businesses and ventures in the state, largely due to partnerships between the private sector and city and county governments.

On Thursday, October 27, several elected officials from Georgia, Forsyth County and the City of Alpharetta gathered at one of those tech hotspots – Digital Ignition – to celebrate the official naming of the road and the future of tech in the area.

“The County has been hard at work for several years laying the groundwork to create this attractive home for the tech industry and we are only just beginning to see the fruits of these efforts,” said Forsyth County Commissioner Chairman Alfred John. “As more of these industry-leading organizations move here and bring their career opportunities with them we welcome them to our vibrant and robust business community with open arms.”

John said that the numerous technology firms were one of the reasons he decided to move to Forsyth County decades ago.

“Georgia’s rise to becoming the tech capital of the South has not taken place overnight, but the rise is meteoric,” said John. “According to research firm CBRE, Metro Atlanta has seen a 15 percent growth in tech jobs over the past five years. Now, when you compare that number with other cities that are also known for tech, talent and growth, such as San Francisco and Austin, both of which have seen an increase of 16 and 10 percent, respectively, it’s easy to see that metro Atlanta is one of the nation’s leading technology hubs.”

According to John, Forsyth County is home to almost 8,000 residents involved in the tech industry, 5,100 of whom are employed in the county. In 2021, Forsyth County was also ranked first in the state for the highest concentration of tech talent and incoming investments, as well as Georgia’s most affluent county.

Alpharetta Mayor Pro-Tem Dan Merkel also said there were currently 700 tech companies in that city, 3.3 times as many tech jobs per capita than the national average. In comparison, he said Palo Alto, California is at 3.4 times the national average. The city’s incubator, Tech Alpharetta currently houses 44 startup companies and was the first of its kind in Georgia when it was founded in 2012.

“Alpharetta is committed to investing in our future by providing tech education, as well as I know you [Forsyth County] are,” Merkel said. “And we’re thankful that the Alpharetta tech community gives back to the community as well as you guys do. So this is a great day and I’m looking forward to this partnership going forward.”

Digital Ignition is a business launching pad currently home to over 50 companies. Joanne Sanders, the president of EWISE Marketing & Communications and the general manager of Digital Ignition, said 80 percent of the businesses grew in the past year despite the difficulties caused by the COVID-19 pandemic.

In 2019, Digital Ignition was home to a technology hackathon called Talking Traffic Lights. It was held in conjunction with the Georgia Department of Transportation (GDOT) and Forsyth County as a way to recruit companies (including international companies) to activate tech partnerships to drive traffic safety programs.

While the pandemic put a halt to any further similar endeavors, the incubator recently partnered with Fundamental Global, which is a “private partnership focused on long-term strategic holdings” according to its website.

Derek Distenfield, the managing director of FG Ventures, announced that Digital Ignition will be the new home to FG Ventures, which helps launch startup businesses, as well as FG Labs, which is a 12-week technology accelerator.

Distenfield said they also plan to host a premier technology summit next fall to bring both local and national business leaders to Forsyth County to offer training and resources to local businesses.

“Our 2023 goal is to have up to 100 thriving companies as part of the ecosystem here at Digital Ignition, which is not just important for investors’ rate of return, but we can benefit the hardworking people of Alpharetta,” Distenfield said. “We’re optimistic that we will have 300 jobs at Digital Ignition’s 100 companies. The bottom line is if you’re a budding entrepreneur looking for capital, and you’re based in Alpharetta, Digital Ignition is the home for you.”

GA 400 is a “major economic engine” for Georgia, according to State Senator Brandon Beach (R). He said one and a half billion dollars are going toward new lanes northbound and southbound on the highway, as well as toward bus transit.

He also said it was very “refreshing” to see Forsyth County and Alpharetta governments working so closely together to grow The Technology Corridor.

“We all need to work together,” Beach said. “And we all need to make sure that we continue to invest in infrastructure, create jobs so that our kids and our grandkids can come back here and raise their families like we have.”

Fundamental Global’s Venture division is planned to launch at Digital Ignition in 2023.

If you have a news tip in Forsyth County, contact Justine Lookenott at justine.lookenott@newsbreak.com.