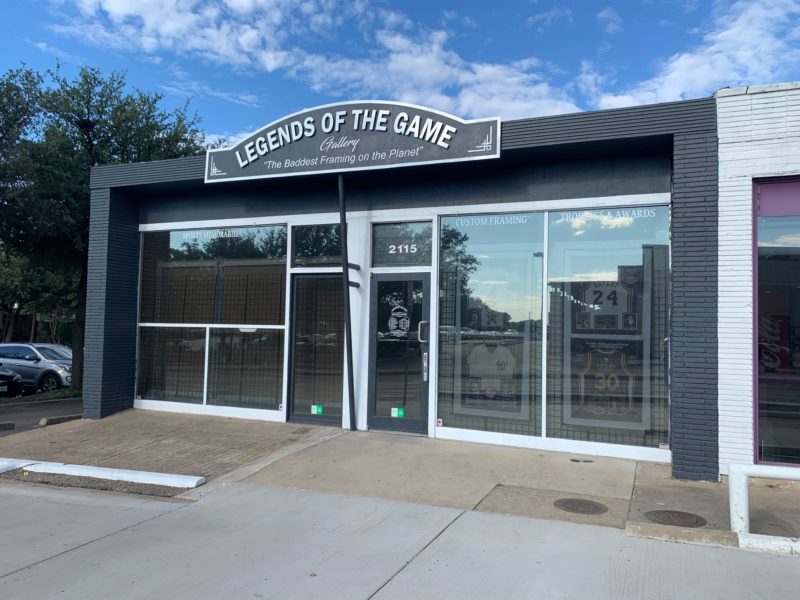 Legends of the Game is opening on Abrams Road. Photo by Sam Gillespie.

Legends of the Game, a frame shop featuring sports and entertainment memorabilia, will open soon in Lakewood.

The new locally-owned business is wrapping up the interior work, converting the old Paciugo space at 2115 Abrams Road, and has an opening targeted for October.

Living in the Seattle area, proprietor Tom Sutherland was growing a career in high-quality carpentry work and, with his wife Amy, began collecting sports and entertainment memorabilia as a hobby. Tom found himself combining his carpentry skills and his passion for  memorabilia designing and building knocked out game rooms for his customers. Friends and neighbors were asking him to build shadow boxes for photos, balls and jerseys.

Deciding to pursue their part-time hobby full-time as a business, Tom and Amy moved to Las Vegas in 2008 and opened a store off the strip. It was a tough go in the middle of the recession, but through his network of memorabilia collectors, Tom partnered with a client who had a large inventory of collectibles that served as the catalyst for success in combining memorabilia and custom framing. Relationships with casino management led to introductions to sports executives and professional athletes.

“It really gave me that ability to challenge myself, get creative, make mistakes and learn and find that gift,” Tom said of this critical time.

The Sutherlands moved back to the Northwest in 2014, buying a home in Tacoma. Tom opened up two pop-up stores in local malls and worked sports memorabilia shows. When Amy entered a transition in her career, they decided to go all in on another store in a location with warmer temps, a growing economy and a heavy dose of professional sports fans. Ironically, Amy’s first scouting trip to Dallas was during the historic February 2021 freeze.

Tom and Amy moved to Forney in the summer of 2021 and began searching for the right location for Legends of the Game.

“We were looking to bring something special and different to a community,” Tom said.

They looked at several locations they liked, always seeming to just miss out. They had settled on a location in Rockwall, but one afternoon at Hollywood Feed, when buying food for their cat, the manager suggested taking a look at the old Paciugo location where a “for lease” sign had recently popped up. A phone call to owners Sean and April Walding ensued, and a deal was struck.