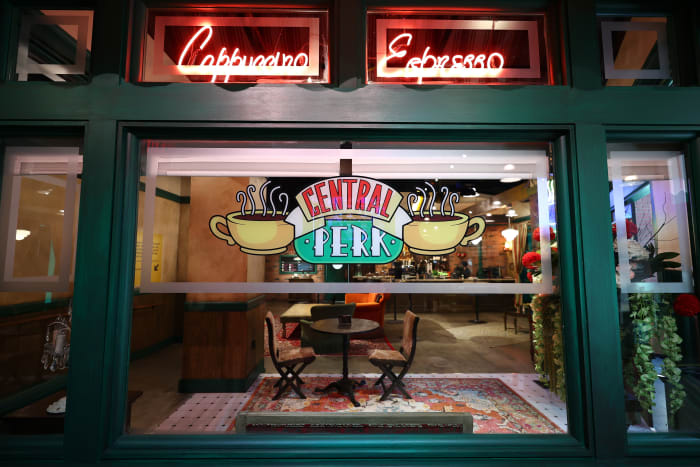 Get excited, Friends fans: a Central Perk Coffeehouse is coming to life!

The new coffee shop, inspired by the NBC sitcom that ran from 1994 to 2004, will open its first location sometime in 2023, a new report from People revealed.

The project is a collaboration between Warner Bros. Themed Entertainment and CenPer Holdings, LLC, which is made up of coffee and food experts; including Top Chef judge Tom Colicchio.

Warner Bros. made a statement to the outlet, announcing that the Central Perk Coffeehouse will be “imbued with the same heart soul as the iconic setting” where Rachel (Jennifer Aniston), Monica (Courteney Cox), Pheobe (Lisa Kudrow), Joey (Matt LeBlanc), Ross (David Schwimmer) and Chandler (Matthew Perry) famously hung out during the 10-season series.

“Central Perk Coffeehouse will be a place for fans (and friends) to slow down and come together over great coffee and eats,” the studio added.

Chef Colicchio also commented on his hopes for the forthcoming project, stating: “Our goal with this partnership and the Central Perk brand, like all of my food and beverage enterprises, is to secure the best ingredients and then deliver superior products and services for a great customer experience.”

But the new coffee shop isn’t the only thing perking up Friends fans, as a new line of coffee products inspired by the beloved show will also become available online starting Wednesday, the outlet reports.

The new line will feature three available blends to choose from, which are all based on clever quotes from the hit series; including “How You Doing?” medium roast blend, the “Pivot Blend” medium to dark roast coffee, and the “We Were on a Coffee Break” dark roast blend.

According to People, the coffee will be available as a customizable coffee subscription, a curated multi-blend sampler pack, or sold individually. They will also be available as whole bean and ground formats, as well as in compostable K-cup single serve pods.

To make the news even sweeter, the first 6,000 Central Perk Coffee subscribers will receive a complimentary limited edition collectible can of “How You Doing?” that will be individually numbered.

According to the report, Central Perk Coffee is also all “sustainably sourced, produced and packaged using responsible environmental practices.”

Cheers to all of that!