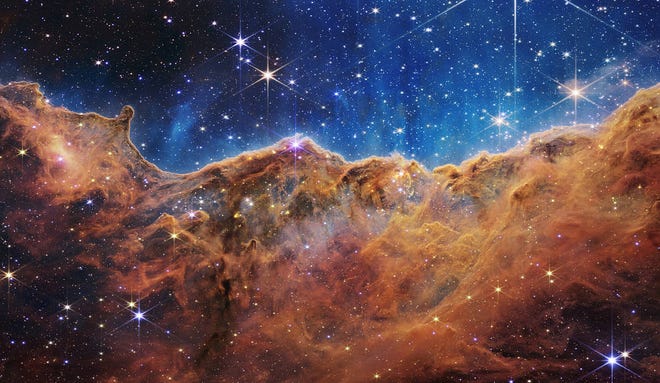 The Florida State Astrophysics Department has advanced since the James Webb Space Telescope launched on Dec. 25, 2021. Three professors at FSU have begun research on their first observation cycle.

When NASA launched the James Webb Space Telescope this past Christmas, there were few assurances that it would reach its destination safely. After a million miles of travel, the telescope still had to carefully unfold from its stowed launch position, cool down to less than negative four hundred degrees Fahrenheit and be calibrated for its first observations.

Nonetheless, the scientists at NASA were more than capable of making this feat of engineering appear easy.

Here in Tallahassee, the Challenger Learning Center hosted a watch party to celebrate NASA’s unveiling of five of the telescope’s first images on July 12th.

There in attendance, FSU astrophysics professor Jeremiah Murphy said that when those first images were beamed in he felt “emotional, in the sense that it was just good.”

“It was good to see this project that’s been going on for several decades to finally come to fruition,” Professor Murphy said. “In the community, we were aware that this thing could go horribly wrong.”

Professor Murphy was more than just the casual viewer. Rather, he was watching as one of three FSU astrophysics professors who had been selected to be some of the first observers to utilize this newly minted space telescope.

Since the James Webb Space Telescope is such a powerful scientific tool whose usable lifetime is finite, its operators in Maryland must go through a lengthy prioritization process to determine whose proposals will receive observation time.

According to NASA, proposals for Webb’s usage are “judged by a peer review system, in which teams of independent scientists will rank the observing proposals according to scientific merit, and the highest ranked proposals will be selected.”

As a new research discipline founded in 2006, it is notable that Florida State’s astrophysics group was granted time on Webb’s first observation cycle. This success is reminiscent of when FSU’s proposal to build the National Magnet Laboratory beat out MIT’s proposal in 1990 and speaks to the concentrated efforts of the university to become a premier research institution.

“We made such a good case that we were really beating out competing groups from Harvard, from the West Coast and the East Coast and really could put FSU pretty much on the map,” said Professor Peter Hoeflich. The proposal, submitted together with Professor Eric Hsiao, will be studying Type Ia supernovae.

All three professors are using Webb to observe the myriad ways stars explode (or begin to, before collapsing in on themselves). The James Webb Space Telescope is powerful enough to see stellar explosions that occurred at the very beginning of the universe over thirteen billion years ago.

“You’re looking really, really far out trying to catch these first supernovae,” said Professor Hsiao. “This is another unknown that Webb can answer, is what these things look like. Because the first generations of stars are not going to be the same as what we have today.”

According to Professor Hoeflich, “the ambition is to become competitive and to stay competitive. Our goal is to really have a lean, mean group where we can take advantage of all the billion-dollar investments. For our students, it’s basically perfect. It’s really a training ground.”

Professor Hoeflich and Professor Hsiao have already triggered their observations on Webb, beginning a process wherein controllers at the Goddard Space Institute will beam out commands to the tennis-court-sized telescope and point it towards their desired star systems. Professor Hsiao described the supernova they’re observing as “practically in our backyard.”

“It’s in another galaxy,” he said. “Meaning millions of light years away but, you know, for us it is nearby.”

For more on FSU’s Astrophysics program and how to get involved, visit