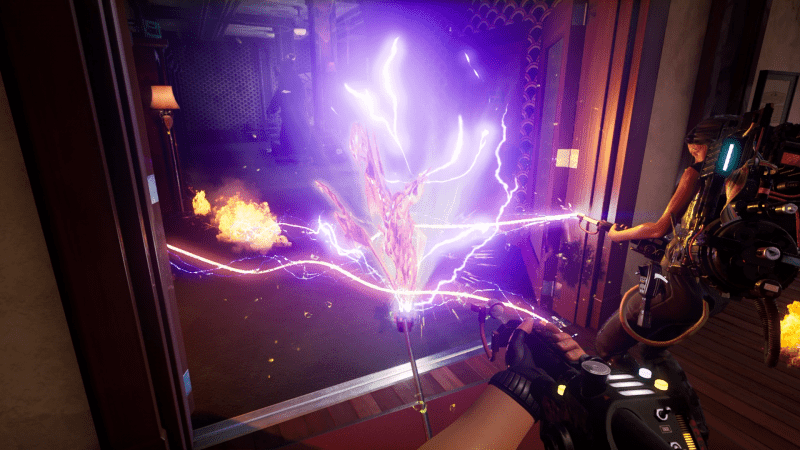 Pairing asymmetrical multiplayer experts IllFonic with the Ghostbusters license is a match made in the spirit realm. Previous outings Friday the 13th and Predator: Hunting Grounds pit Jason and Predator against camp counselors and mercenaries with flashes of greatness, but technical issues and uneven design choices held them back. With Ghostbusters: Spirits Unleashed, the team has applied everything it’s learned about compelling asymmetrical multiplayer to a property that perfectly lines up with the game style.

Four fully-customizable Ghostbusters face off against one ghost on five maps ranging from an Alcatraz-inspired prison to a cozy lodge. The key difference from other asymmetrical games is both sides are fun to play. You’re not just biding time until you can play as the ghost. If that’s all you want to do, however, it’s easy to set your preference and be haunting random players online with hardly any wait time (at least during my tests on launch day). The active early player base and full crossplay between all platforms combine to make this happen, and it’s impressive to see such smooth execution out of the gate. If you’re a Ghostbusters fan who doesn’t like online multiplayer, it’s easy to play against not-so-challenging bots and still experience all the content.

The match flow starts with Busters fanning out with P.K.E. meters drawn to track down the ghost and its respawn points. These rifts are hidden within objects, and destroying them takes away one of the ghost’s three “lives.” If you encounter the ghost directly, you can zap it with your Proton Pack and wrangle it into a trap to eat up a life as well. On the ghost side, you try to haunt as many objects as possible and scare the NPC civilians wandering around to increase the overall haunting level of the map. Once haunting reaches 100 percent or the ghost runs out of rifts, a final endgame timer begins. If the Busters capture the ghost in that time, they win. The map is officially haunted if the ghost evades capture, and the Busters scurry away in shame.

Calling to your buds when you spot the ghost and cramming it into a trap as a team is extremely satisfying. While the Busters can be temporarily incapacitated with slime, no one is ever stuck on the sidelines watching the rest of the match play out. There’s always hunting or blasting to do. The only low point on the Buster side is calming NPCs with the same VO lines ad nauseam.

The five ghost types account for a variety of play styles. Do you want to be quick and mischievous, go on the offensive with God of War-style chain attacks, or use tricks to manipulate and misdirect? All ghosts have a basic attack, a minion summon (for occupying Busters or frightening civilians), an ultimate move with a long cooldown, and a unique action that’s different for every skin. Possessing objects is key to hiding from Busters and recharging the energy you need to do pretty much anything. Experimenting with how everything handles is interesting, like a smooth rolling beer keg or a floppy giant teddy bear. While ghosts are extremely powerful and mobile, they’re also vulnerable to capture at any time. One minute you’ll be triumphantly sliming all four busters and sabotaging their Proton Packs, and the next you’ll be frantically mashing buttons to escape the pull of the streams and deadly traps. It’s a delight to hear opponents’ confusion while you stay out of sight, or their frustration as you cover the whole team in a whirlwind of slime.

The classic firehouse serves as a multi-use hub when you’re not actively in matches. A handful of cutscenes tell a basic story through the game’s early hours. The narrative is nothing to get excited about, but hearing Dan Aykroyd and Ernie Hudson reprising their roles as Ray and Winston is nice. As you level up, you find new cosmetics, gear parts that affect stats, collectibles, and contracts that reward special items and experience bumps. Daily and weekly jobs encourage you to check in regularly as well. I found the steady flow of goodies kept my group dashing to the lockers to try on a new shirt or silly glasses between jobs. And the gear upgrades feel tangible, especially when your particle thrower can let loose for longer without overheating. 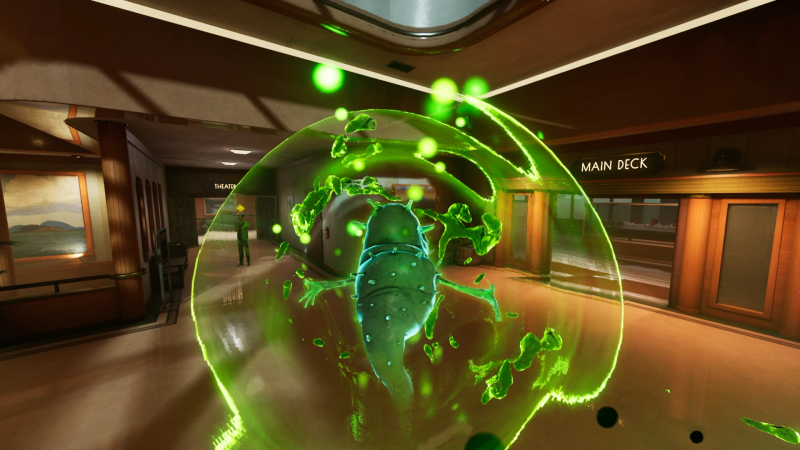 While the core gameplay is strong and engaging, I have concerns about Spirits Unleashed’s long-term sustainability. There’s only one match type, so if you get tired of that, you’re out of luck. The five current maps are solid, but I’m ready for more (IllFonic claims additional free maps and ghosts will roll out in the future). Story and unlocks keep things interesting during your first 30 character levels, but then the story comes to a hard stop. You’ll get all the core unlocks by 50. Beyond that, the current endgame consists of completing high-level contracts such as “do X-objective 25 times” and so on. Sometimes I would learn new aspects of the game I hadn’t realized before, but other times I’d be firing up bot matches hunting for floor waxers to shoot, or repeatedly throwing out my trap and picking it up to check off some annoying requirement.

The pre-release version of the game had some hard crashes, and I also got stuck in the geometry as a ghost a couple of times until the end of the match. I couldn’t replicate these issues after the day one patch, but it’s something to watch out for.

The ideal way to experience Spirits Unleashed is to round up your buddies, rotate through maps, take turns playing as the ghost, and proceed to hoot and holler. If that’s not an option, matchmaking with random players is smooth and quick, and in-game markers make teamwork possible even if everyone’s playing off-mic. The thrill of Ghostbusting eventually starts to wane, but it takes a while to get to that point, and updates down the road could help to keep those Proton Packs humming.