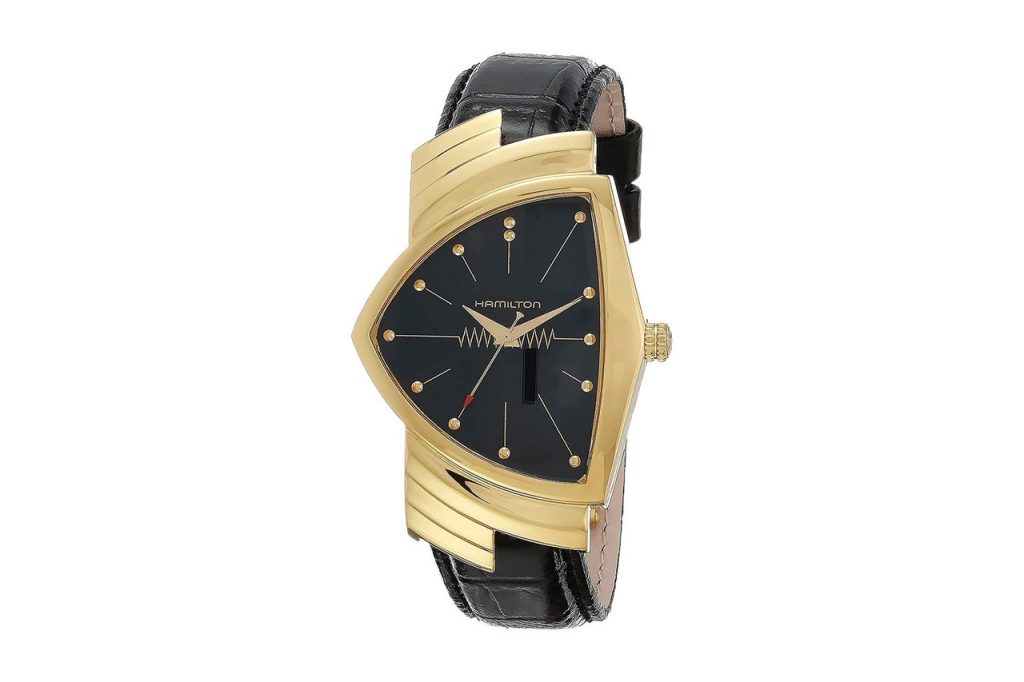 With Baz Luhrmann’s much-hyped Elvis biopic hitting theaters this week, the King—helped along by Austin Butler and a wardrobe co-designed by Miuccia Prada—is set to reclaim his rightful place on the moodboard throne. Elvis’s modern-day stylistic legacy might be all sequined jumpsuits and massive gold shades, but there was more to his wardrobe than those kitschy standbys. Along with high-waisted pants and Hawaiian shirts, he also collected watches, with a penchant for diamond-studded Omegas and the Rolex King Midas—in other words, models worth emptying the royal coffers for. But there’s one Elvis-approved timepiece that doesn’t demand a king’s ransom: the Hamilton Ventura.

Dreamed up in the late ‘50s by American car designer and sci-fi magazine illustrator Richard Arbib, the Ventura was the world’s first electric watch, and its angular case was as groundbreaking and futuristic as its inner workings. Inspired by—and rooted in—the design hallmarks of the tailfin era, it combined the sleek industrial lines of a googie diner with the atomic kookiness of a George Nelson clock. The Ventura wasn’t an instant hit, but when Elvis wore it in 1961’s Blue Hawaii it became as synonymous with the singer as blue suede loafers, and remained inextricably tied to him ever since.

The Ventura stayed at the forefront of watch technology for just a few years, but the 2022 version retains all the sci-fi optimism of the original. Hamilton has riffed endlessly on the model’s legendary design in the interim, incorporating chronographs, skeleton dials, and oversized cases (even trotting out a wild denim-on-denim version)—but the unapologetic midcentury cool of the OG still shines the brightest.

Fortunately, the brand also sells a model that’s about as close to the original as it gets, down to the gold-plated case, faux crocodile strap, and sub-$1,000 price. That makes the Ventura one of the most stylish—and historically significant—watches you can buy at retail, and the quickest way to channel Elvis’ hip-swinging heyday without tracking down a Vegas-ready jumpsuit.