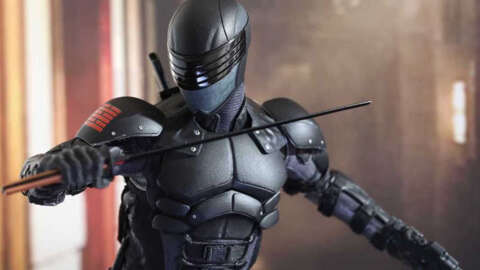 After making its name in toys and board games, Hasbro is the latest big company trying to break into the video game industry. With six video game studios now under its belt, the company is making games based on its impressive stable of franchises, which reportedly includes a “big-budget” game centered around the G.I. Joe character Snake Eyes.

The news comes as part of an Axios report into Hasbro’s video game projects, which also include projects under subsidary Wizards of the Coast. One of the company’s studios Atomic Arcade, which is based in Raleigh, North Carolina and led by former Warner Bros. dev Ames Kirshen, is developing a “big-budget action-adventure game” starring the G.I. Joe universe’s Snake Eyes.

Snake Eyes was also the star of a 2021 film by the same name, which served as an origin story for the character and is intended to be the first in a rebooted G.I. Joe film franchise. While it’s possible the game could tie into the film universe, no more details on the game have yet been released.

The G.I. Joe franchise has had a number of video games over the years, dating back to 1983’s G.I. Joe: Cobra Strike on the Atari. The most recent release was G.I. Joe: Operation Blackout, a third-person shooter released in 2020 that was developed as a licensed game by Chilean studio IguanaBee.

While Hasbro has five other studios all working on their own projects, most of them are still unannounced. Texas studio Skeleton Key is working on a horror game that may or may not end up involving one of Hasbro’s existing franchises. An unnamed studio in Washington is working on an original project which Hasbro general manager of digital gaming Tim Fields says will be “kind of unexpected for our fans.”

Texas studio Archetype Entertainment is developing an original sci-fi RPG, while the developers behind 2021’s Dungeons & Dragons: Dark Alliance also have a new, unnanounced project in the works. The last studio on Hasbro’s books handles the ongoing development of MTG: Arena, and is based in the same offices as the rest of the Magic: The Gathering team.