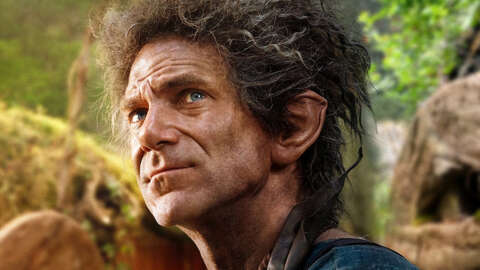 While Prime Video’s upcoming series Lord of the Rings: The Rings of Power takes place in JRR Tolkien’s Middle-earth, the showrunners got to take some liberties with the world, like expanding on Tolkien’s work with brand-new characters.

Obviously, Tolkien fans may be a little leary of new creations for the beloved franchise– the author himself passed away in 1971 and can’t add more to the lore. However, the show’s creators aren’t cavalierly bringing them into existence: They say they’re painstakingly creating them based on writing and clues from Tolkien’s books.

During the Rings of Power panel at San Diego Comic-Con 2022, showrunner JD Payne was surrounded by others from the show, as he spoke to a massive audience inside Hall H. “We had the privilege of working with Tolkien scholars and amazing linguists and lore masters that were in the writers room,” Payne explained. “Tolkien gave us all these great clues about cultures of the Second Age.”

The creators of the show pieced together clues from Tolkien’s writing, expanding on the world. For example, Payne explained that Tolkien wrote a couple of paragraphs about Harfoots–one of the three ancient breeds of hobbits. They used that information and tried their best to “interpret things as Tolkien-en as possible.”

“These are not hobbits,” Payne said. “They are Harfoots. Tolkien said that hobbits didn’t do anything extraordinary before the Third Age, so we felt we had some license to tell a good Harfoot story.”

During that panel, a new trailer debuted for the show, which featured a Balrog at the end, and Hall H erupted in a huge amount of cheers.

Rings of Power isn’t the only fantasy adaptation to get a trailer at SDCC. On Thursday, Dungeons & Dragons: Honor Among Thieves had its first trailer debut, and it featured plenty of monsters that D&D players are super-familiar with.