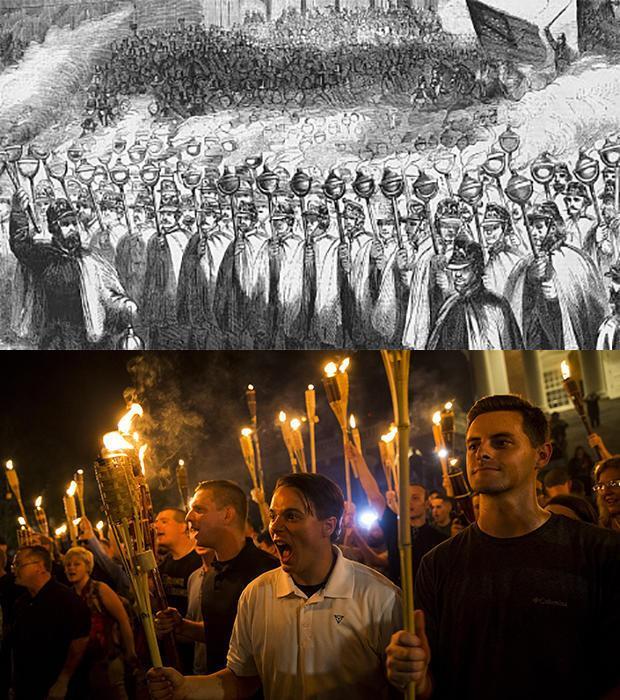 At the Smithsonian Institution, historian Jon Grinspan is a curator in charge of that part of the “Nation’s Attic” that holds the objects of American democracy and politics. “I call this the fossil record,” he said, “that just as the Smithsonian is known for its dinosaurs, these are the fossils of democracy.”

He showed CBS News’ John Dickerson artifacts of America’s political life: “These are objects from both the deep history of American democracy and recent events, from elections, protests, what have you. And you start to see techniques and devices reappear over time. These things kind of rhyme with each other. These objects almost talk to each other across different periods.”

Grinspan is also an author, who was working on his latest book about the violence in American politics at the end of the 19th century, “The Age of Acrimony,” when his work started to feel increasingly like a study of our own time.

Dickerson asked, “When you were writing about these themes from the late 19th century, you’re also seeing it out your window in American democracy at that present moment.”

“Seeing these things from our past, these really ugly trends that I had thought we’d put away, be kind of reverse-engineered and come back, it’s eerie,” Grinspan said. “It’s too relevant all of a sudden.”

Torches carried five years ago by white supremacists in Charlottesville recall torches carried by advocates of the opposite position in the 1860s – anti-slavery marchers, the “Wide Awakes.”

After the Civil War, blacks were attacked for exercising their newfound right to vote. Opponents of immigration questioned what it meant to be a “real” American. The recession of 1873 was followed by a hotly-contested presidential election.

Whether it’s 150 years ago or today, when political affiliations become so closely associated with people’s identities, conflict is no longer about ideas; it’s personal.

A recent Pew Research Center poll found that growing shares in each party now describe those in the other party as more closed-minded, dishonest, immoral, and unintelligent … just like in the 19th century.

“When American politics is at its ugliest, there’s a sense among perpetrators of violence that the other side should not be participating, [and] has no right to be engaged,” Grinspan said.

To bring us back from the brink today, Grinspan suggests we look at how 19th century leaders cooled the passions of their times.

“How did they do it in a system that was rewarding acrimony?” asked Dickerson.

“One of the things that drives this is that there’s always a sense that a certain class of politicians should be removed from the ugliness of politics, that presidents in particular are supposed to be a friendly national grandfather,’ Grinspan said.

“So, there was a wall between politics and the presidency. And that wall has been eroded.”

“It’s fascinating from a historian’s perspective, to see how many things that seemed set, that seemed like the norms of democracy, are just because people follow them until they don’t.”

“How do we survive this period where it seems only to be escalating towards something dangerous?”

Grinspan replied, “That’s the fundamental question, and there’s a big transition from a political system that’s deeply public and fought out in the public square to one that’s private, where you don’t talk about politics at the dinner table. And this sense that restraint is the key value in democracy? It sounds too easy. You say restraint and it works. But if you say something enough in the culture, that’s how you make change.”

READ AN EXCERPT: “The Age of Acrimony”