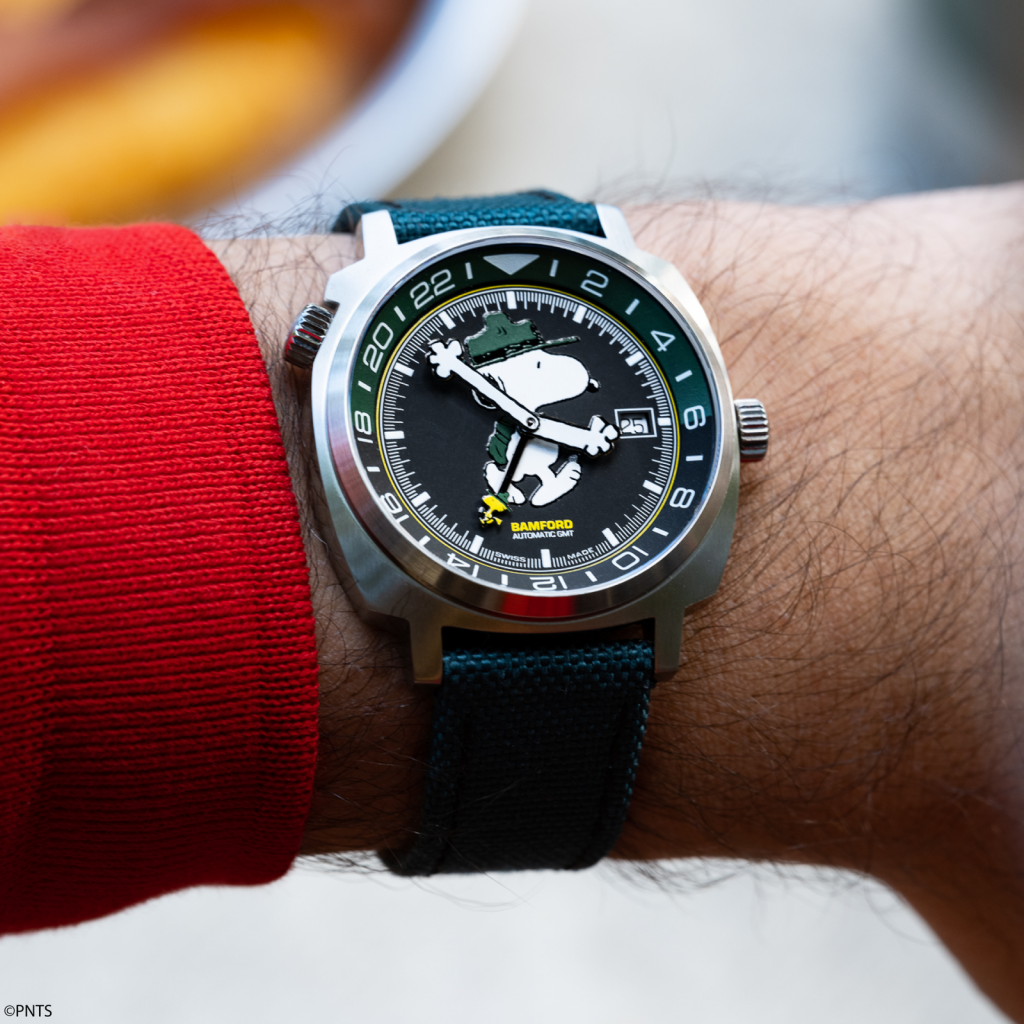 In his daydreams, Snoopy took on many personas, almost all of them world-famous: the greatest living surgeon, a skilled WW1 fighter pilot, an arm wrestling champion, and the coolest most sunglasses-pulling-off creature on earth. Last year, watch designer George Bamford, along with the limited-edition team at watch publication and retailer Hodinkee, received an interesting Snoopy-related assignment: comb through the catalog of the famous cartoon dog’s alter egos, pitch their favorites, and decide which one belonged on the dial of an almost-$2,000 mechanical watch.

The first collaborative Hodinkee-Bamford London Snoopy watch featured Joe Preppy and released in April of this year. The GMT sported a black-and-white 24-hour internal bezel—and a bespectacled Snoopy wearing a tweed jacket. It sold out in three minutes, the second-fastest a Hodinkee limited-edition has moved. “We were surprised by how popular the first one was,” Eneuri Acosta, Hodinkee’s chief brand officer, said over a Zoom call. Now, after considering other versions of Snoopy like “Joe Cool,” the pair is back with another GMT featuring his “Beagle Scout” alias.

This new timepiece is a more dressed-down version of a Snoopy watch with its leaf-green accents and a fabric band that looks and feels like something the Beagle Scout might use to get his knot-tying merit badge. Both of Hodinkee’s Snoopy watches set Woodstock loose at the tip of the second hour hand. Priced at $1,850, it will compete with the Joe Preppy piece for the fastest sell-out time. More than 4,000 people signed up to get an alert for the watch’s release, which is limited to just 250 pieces. (Snag it from Hodinkee’s online shop at 11 a.m. EST today.) Beyond these two Hodinkee drops, Snoopy watches from Omega, Timex, and Bamford on its own find eager audiences. All of which begs the question: what mysterious forces make a Snoopy watch this valuable and desirable?

Character watches aren’t actually new in the watch world. Gérald Genta, the man behind the Patek Philippe Nautilus and Audemars Piguet Royal Oak, made luxury watches featuring Mickey Mouse in the mid-’80s. However, these character watches have picked up major steam (adding a couple zeroes to their price tags) in the past couple of years. The Genta brand recently brought those Mickey watches back, while Gucci added the Disney mouse to timepieces, too. Last year, the partnership between Marvel and Audemars Piguet birthed a $162,000 Black Panther watch with a ceramic figurine of the superhero standing guard at the center of the piece. Turns out Popeye’s spinach-fueled arms were also perfect stand-ins for a watch’s second and hour hands. It gets way wackier, too: Kostantin Chaykin made a 13,800-euro Minions watch last year.

On first blush, the character watch can seem like a novelty. But it also represents an interesting chunk of a collection. When you get into the watch game, the (admittedly saccharine!) piece of advice you’ll hear on repeat is to collect what you love. Character watches aren’t prototypical investment pieces, and a cartoon character on a dial isn’t necessarily the fastest way to communicate to passerby that you dropped a decent chunk of change on a watch. But there are no watches that better speak to unvarnished personal taste and love. “[A character watch] is probably not your first watch, probably not your second watch,” Acosta said. “It’s probably a watch that you discover many layers into your watch collecting journey.”

And there is no character collectors are more excited to see on their watches than Snoopy. He’s been a fixture on watches dating all the way back to the ‘50s, when the New York-based maker Armitron put Snoopy on its pieces. Before there were Hodinkee x Bamford Snoopy watches, there were just Bamford Snoopy watches. Timex and Swatch have scoured the Peanuts catalog for different versions of the cartoon dog to put on their dials.