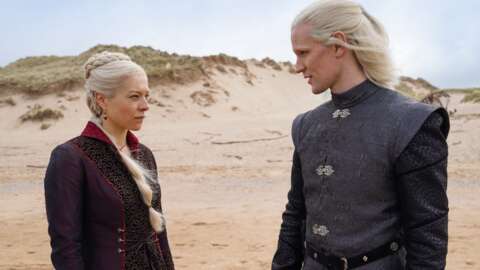 In a new behind-the-scenes video for Game of Thrones spin-off House of the Dragon, showrunners Ryan Condal and Miguel Sapochnik discuss making a new series against the legacy of the original show–as well as doing justice to the world created in George R. R. Martin’s books.

The video features both showrunners, as well as Martin himself, talking about the considerations that went into making the Game of Thrones prequel.

“I feel incredibly loyal and responsible to the original show,” said Sapochnik, showrunner and veteran of the original series, which he directed a number of episodes for. “I have a great desire to even be in the same room as that show, because it was a game-changer.”

“You get that great call which is the thing that every writer is hoping for, telling you: ‘we’re going to go make this thing,'” said Condal, who is new to the franchise with House of the Dragon. “And you’re happy for a few seconds, and then you realise the responsibility that’s on your shoulders.”

Martin has already thrown his support behind the spin-off, and he reiterates that in the video, calling Condal “someone who really knew my work,” and saying that Sapochnik directed some of the best episodes of the original series.

Of course, with the original series’ ending largely disappointing fans after eight years of dominating the pop culture landscape, Game of Thrones’ legacy is not entirely a positive one. While not addressed directly in the video, Sapochnik does say that “the idea of going back to Westeros was almost too much of a challenge.”

Elaborating on the way the showrunners chose to approach the series, Sapochnik explains, “you have to start by respecting it, you can’t start by doing it different for different’s sake.” Condal also adds that House of the Dragon is not going to be “a prequel for prequel’s sake.”

The behind-the-scenes video gives plenty of new glimpses at the Targaryen-dominated Westeros of House of the Dragon ahead of the show’s HBO Max premiere on August 21. The video also reiterates the epic scale of the show, giving us a look at the process of filming at least one major battle.