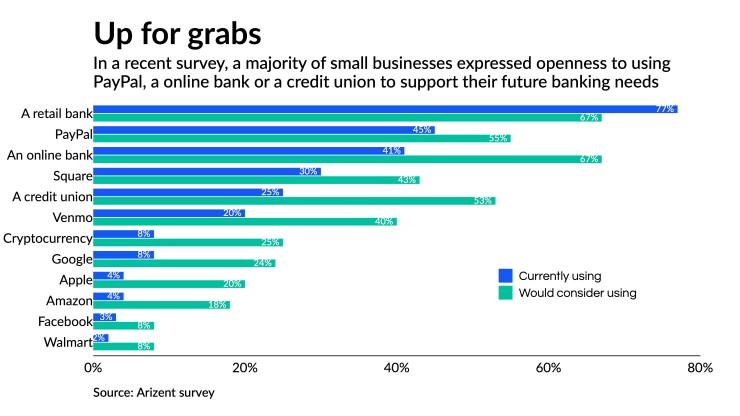 The traditional banking industry may need to improve its small-business product offerings to avoid losing customers to a new crop of competitors.

That’s according to a new survey from Arizent, the parent company of American Banker, which found that companies such as PayPal, Square and Chime have already taken a significant share of the market.

“While small businesses are loyal to their primary banking providers and show relatively low levels of switching, most still use more than one organization to access banking services, which provides a welcoming competitive access point for new entrants,” the report stated.

The report is being released Monday in connection with the start of American Banker’s Small Biz Banking Conference in Nashville, Tennessee.

Out of 358 businesses surveyed, 45% said their banking providers include PayPal. A similar amount reported using online banks, such as Discover and American Express or nonbank fintechs such as Chime, while 30% said they work with Square.

Business owners are also “taking a more expansive view of banking,” according to the report, with some respondents saying they would consider tech giants such as Google, Apple or Amazon for their banking needs.

Banks may be able to retain more customers if they can boost their investments in several areas where they’re underperforming, the report said.

The top five priorities for the small businesses surveyed were digital banking tools, cybersecurity and fraud protections, low fees, having easy access to bank personnel and having a wide range of products from which to choose.

On each of those priorities, the banking industry’s performance has been “underwhelming,” the report said. About 60% of customers were “very satisfied” with their primary bank’s digital tools, their access to personnel and the breadth of business banking products, while about half gave a thumbs-up to their bank’s cyberattack protections and fees.

Improving access to bank personnel does not necessarily mean building more branches, which was a “critical” factor for only 9% of businesses in picking a provider. Rather, small businesses want banks to make it easier to talk to their personnel — by phone, chat, video or other methods.

That one-on-one advice is where community banks and credit unions may have an advantage over larger banks, according to Ian Benton, senior analyst for small business banking and payments at Javelin Strategy & Research.

Smaller depositories often have “better, more granular knowledge of their regions and communities” and an ability to offer more personalized help, Benton wrote in a report last month. They can also “fight back against large banks’ digital supremacy” by embracing partnerships with their core providers or third-party vendors, he wrote.

Almost half of the respondents to Arizent’s survey said they use their banking provider’s mobile app every day, while 28% reported using it weekly. Few of them reported visiting a branch or ATM daily, but one in three said they do so on a weekly basis, the report found.

Banks and credit unions cannot rely on offering the four main products that small businesses use, according to the report. Those traditional products are business checking, credit and debit cards, payroll processing and payment card processing.

“Financial institutions shouldn’t stop there in their product offerings, as they may be missing out on other, more lucrative lending products as the business grows and the relationship deepens,” the report said.

Despite banks’ shortcomings, the survey found that small businesses appear to be largely satisfied with the services that their banks offer. Two-thirds of small businesses said they were “very satisfied” with their primary bank, and 30% were “somewhat satisfied.”

About three in four respondents said inflation was among their top three challenges, with supply-chain disruptions and workforce recruitment and retainment also getting significant mention.

The top priority for small businesses over the next year is acquiring new customers, according to the report. “However, inflation fears are making them take actions to reduce costs and boost efficiencies by investing in technology,” it stated.

Arizent conducted the online survey between July 18 and Aug. 5, polling small-business stakeholders in a variety of industries. Respondents either own the business or directly participate in their company’s banking relationship.

The average number of employees at the firms was 129, and their average revenues were $8 million, though nearly a third of them had less than $1 million in revenues.