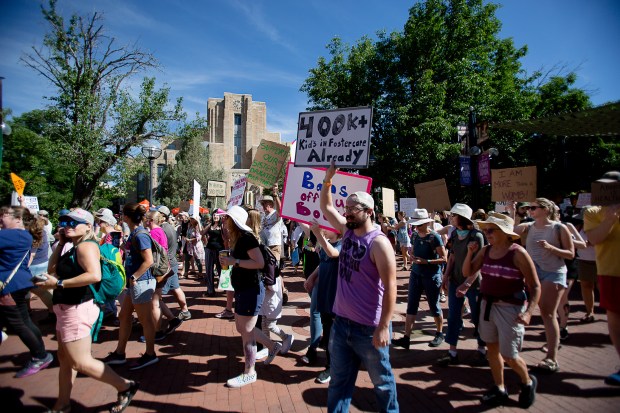 Business owner Angela Wilson hopes to add a stipend in her company’s employee benefits to pay for out-of-state abortion. She calls the benefit an addition to the family-friendly core values of her company that may entice workers to join her at Exploryst.

Wilson founded the Thornton company as a resource guide for those with disabilities planning adventures domestically and around the world. She started the company after feeling continually frustrated by the sparse or incorrect information about accommodations, restaurants or fun stuff for her son, who uses a wheelchair because of his intellectual and physical disabilities.

She has big plans. When she’s asked how big, she answers, “How big is Trip Advisor?” Right now she’s a staff of one based in Thornton, but she hopes to add employees by the end of the year. Her views on political and social issues mirror the struggles she’s experienced as a member of the disabled community, to the point where potential employees have given her a hard time, accusing her of being woke, for using the words “inclusion,” “respect” and “dignity,” knowing that, for her, that means everybody and everything.

“Respecting people’s fundamental dignity, that’s important not only for the disabled community but for humanity,” she said. “We want to allow people to live their lives as they see fit.”

That also means the right to individual and protective health care; she has goals of offering 12 weeks of parental leave and other policies that she believes are “pro people and pro family and pro work-life balance.”

That’s relevant to Colorado, as it was the first state to approve legislation that protects abortion rights, and it’s got John Tayer, president and CEO of the Boulder Chamber of Commerce, thinking about what the future could bring. Could the right to abortion be a way for companies in the Boulder area to recruit top talent? He even wonders if businesses may migrate out of states that ban abortion, though he hasn’t heard of a specific one ready to come to Colorado. He’s also not recruiting using that as a carrot.

Maybe he should. John Boyd Jr., a principal of the Boyd Co., a New Jersey consulting firm that helps corporations select sites for their headquarters, including Honda, PepsiCo and Hewlett-Packard, said states banning abortion present what he called “an opening wedge” for blue-state governors to create a relationship with a company: That opening may not have existed without this issue.

“It’s unclear to the degree in which the (Supreme Court) decision will have on the site selection process,” Boyd Jr. said in an interview. “But this presents a new economic development narrative for blue-state governors.”

Acquiring top talent is probably the most important problem companies face right now, and they’re competing with each other to get it, Boyd Jr. said, particularly young talent. Polls suggest that those workers, by an overwhelming margin, prefer to live and work in states where abortion is legal. He said Colorado and a few other states such as New Jersey or California (which was losing workers and companies because of high taxes and strict regulations as well as overcrowding) now have an advantage over areas that were flourishing, including Atlanta, Houston and Salt Lake City.

“Developers in those markets are going to have to deal with this new obstacle now,” he said. “Every company has different priorities, and every site selection process has unique drivers, but the big picture in the battle for talent is paramount. This is an era of unprecedented mobility.”

Gov. Phil Murphy of New Jersey, in fact, sent a letter to dozens of businesses touting the state’s move to legislate and expand abortion rights even before the Supreme Court’s decision was released, but after it was leaked. Gov. Gavin Newsom of California aired a commercial in Florida urging residents to “fight for freedom” or move to his state.

Colorado, however, so far mostly seems to prefer to let the legislation speak for it, and many other officials and businesses seem to prefer that as well. More than a dozen businesses didn’t return messages seeking comment, even after Tayer reached out. Attorneys didn’t want to talk either. Organizations that fight for the right to abortion didn’t want to talk, and Cobalt, a state organization that provides financial assistance to those seeking abortion care, didn’t return messages either. Even the state’s Office of Economic Development and International Trade answered the question with a statement that…doesn’t answer it (but here it is anyway).

“Colorado is known across the nation as a great state to work, play and live,” it read. “Businesses know that and continue to consider our great state.”

Boyd Jr. understands the reticence — bragging about abortion access could seem crass — but the competition is strong enough that they should look for any edge.

“Some companies will want to avoid this altogether, but some, I suspect, will view this as a fundamental business climate issue,” he said.

Many already have, including national businesses with a large presence in the state as well as Boulder and the area have issued statements saying they would cover travel expenses. Vail Resorts Inc. announced it would cover up to $4,000 in travel expenses if services aren’t available in their state. This is significant since Vail employs workers in conservative Utah, which has already moved to ban abortion. The company, in fact, said it has tens of thousands of workers spread across 16 states who will have varying access to reproductive health care.

“We believe everyone is entitled to make choices about their own reproductive health, no matter where they live,” the Broomfield-based Vail Resorts posted on Twitter on June 29.

There’s no doubt in Tayer’s mind that Boulder companies are moving to be among the nation’s leaders  in protecting abortion rights for their employees. Boulder is home to many tech companies, and they tend to be progressive, Tayer said, Boulder itself is progressive — other states or those from eastern Colorado might say “extremely liberal” but you get the idea — and tends to attract progressive businesses as a result. “There are going to be businesses that will adopt policies characteristic of the values of Boulder,” Tayer said. “They want to make it clear that they are a difference-maker for the workforce, and that includes coverage of reproductive rights. They recognize that they need to be attractive to the full diversity of the workforce, and that includes gender.”

Consequences for states that make moves seen as infringements on human rights can be significant, as many businesses don’t want to be associated with them, even if they remain relatively quiet about them. Colorado got Major League Baseball’s All-Star game last year when MLB pulled out of Atlanta because of Georgia’s new restrictive voting laws. North Carolina’s Transgender Bathroom Ban cost the state nearly $4 billion in lost business. Boyd said the numbers don’t show opportunities lost, such as conventions that eliminate states outright or artists who don’t tour in a state.

“When you look at how important women are in the workplace,” Boyd Jr. said, “it’s certainly reasonable for some companies to make location decisions based on reproductive rights alone. Look at what happened after the bathroom bill.”

A recent study by the Institute for Women’s Policy Research estimated that if all state-level abortion restrictions were eliminated, 505,000 more women aged 15-44 would be in the labor force and that they would earn more than $3 billion annually.

Companies that have stated they would protect abortion rights include Amazon, Tesla, Apple, Airbnb, Netflix, Alphabet, Dick’s Sporting Goods, Kroger, Target, Patagonia, Starbucks, Wells Fargo and Yahoo. Dick’s said it would cover the same $4,000 for employees and so did Amazon.

Patagonia even said it would bail out both part-time and full-time workers who peacefully protest for “reproductive justice” and are arrested as a result in addition to travel expenses.

It’s unclear what this means legally, and the regulations surrounding it are shifting all the time, said Steve Busch, president of the Boulder chapter of the Society for Human Resources Management, what Busch calls the “gold standard” for data and information regarding employee issues. Busch owns his own consulting company, Human Resources Strategy, and has 30 years of HR experience with Fortune 500 companies. The issue has been challenging for HR managers: When he’s called for consultation, he refers people to insurance brokers and attorneys who are more versed in what companies’ legal responsibilities are to their employees.

“It’s changing quickly,” Busch said. “It feels like it’s still changing as we go. It’s such a complex and changing issue. Employees in HR development should exercise prudence in answering such a question to employees.”

Busch put abortion in perspective, as COVID-19 remains “fresh on our minds,” he said, an issue that probably caused more than a few HR employees to resign. Still, this issue “is a challenging one,” he said, especially because of privacy concerns.

SHRM articles say that travel benefits for health care are nothing new, and the Supreme Court may have provided some guidance in its decision to overturn Roe v. Wade. Justice Brett Kavanaugh’s concurrence said a state may not bar one of its residents from traveling to another state for an abortion, which could offer legal protection for companies.

Even if Colorado fails to attract companies because of this issue, it will likely attract some workers, and that’s significant in today’s remote environment, Boyd said, including likely workers in tech and innovation. These are the people who eventually start their own companies.

People such as Wilson, who hopes to attract a talented workforce of her own with her inclusive work values.

“That’s my intention,” she said. “I know people myself who just weren’t ready or in a bad situation, and it saved their lives. Maybe not medically, but I can’t tell someone what to do with her life.”

Best Wrench Sets to Get the Job Done