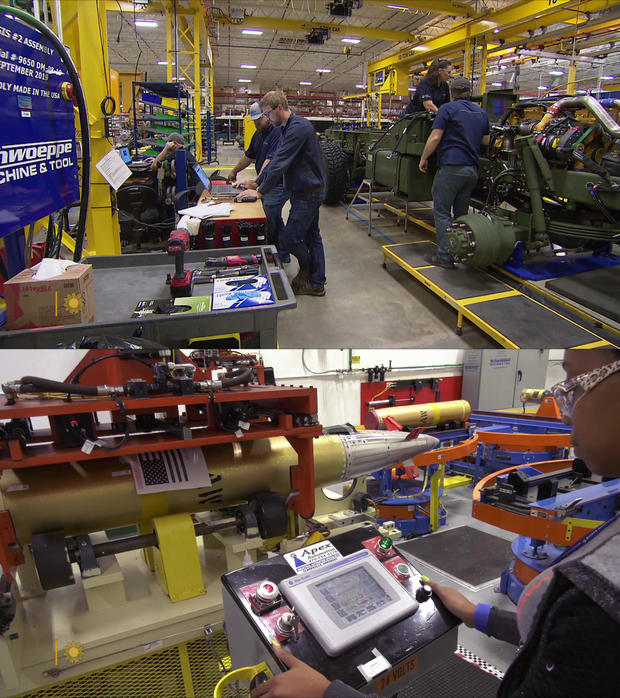 It’s been a standard, largely-unnoticed part of the American military arsenal for decades. But when HIMARS (an acronym which stands for High Mobility Artillery Rocket System) showed up in Ukraine, it changed the face of battle. “This capability has given the Ukrainians the potential to completely change the momentum and the direction of this war,” said retired Lt. Gen. Ben Hodges, former commander of the U.S. Army in Europe.

He said HIMARS, which fires a 200-pound warhead up to 50 miles and hits within 10 feet of its intended target, has virtually eliminated Russia’s numerical advantage.

“You don’t have to have hundreds of artillery rounds to achieve the same effect as one rocket fired from HIMARS,” said Hodges.

“In numbers, I’d say yes. But what really matters is effect. And the effect that Ukraine is achieving, it seems to me at this point to be superior to what the Russians are able to deliver.”

Since June, the U.S. has shipped Ukraine 16 HIMARS launchers and thousands of rockets, which defense officials say the Ukrainians have used to attack more than 350 Russian command posts, ammo dumps, supply depots, and other high-value targets far back from the front lines.

Hodges said, “The HIMARS and other long-range capabilities have given the Ukrainians the ability to reach out and hit targets that the Russians would have thought were safe.”

Martin asked, “Why can’t they just move all these command posts and ammo dumps further back from the front line and get them out of range?”

“You still gotta get that ammunition to the guns, which are closer to the front,” Hodges replied. “So, now you’ve increased the distance that the trucks have to move, carrying very heavy ammunition. And they’ve lost well over 1,000 trucks in this campaign so far. The result is significant reduction in the amount of Russian artillery and rocket fire impacting on Ukrainian forces.”

All that from a weapon made at a Lockheed Martin plant in rural Arkansas – a seemingly minor outpost in America’s vast military-industrial complex, which is now racing to catch up with the sudden demand for HIMARS.

“We have to plan for at least to double this – the production here probably will be double,” LaPlante said.

Martin asked, “How long can you keep that up?”

“As long as the demand is needed. We can keep production lines open for 30 years.”

Lockheed Martin’s chief operating officer Frank St. John said the plant is currently turning out about 7,500 rockets a year. Martin asked him, “You heard the man from the Pentagon; he said they’re probably going to double production. Can you double production?”

“How fast can you do this?”

“I would say on the order of 18 to 24 months, to make any significant changes in the production quantities.”

The nose cone carries a satellite guidance system which gives the rocket its sniper-like accuracy. But what impresses LaPlante most about HIMARS is not the sophistication of its technology, but the simplicity of its use. “There are just three operators, probably 18- to-20-years-old, and the system works,” he said. “And they can use it effectively within a week. That to me is as important as its accuracy. It’s reliable, and can be done by 18-year-old Ukrainians.”

To see how HIMARS operates in the field, Martin went to the U.S. Army training range in Yakima, Washington, where they use the same tactics taught to the Ukrainians.

At a “hide site,” the HIMARS crew tries to conceal itself from enemy surveillance. Once it leaves here for its firing position, the HIMARS is liable to be spotted and targeted, so the clock starts ticking.

The HIMARS launcher has a top speed of 55 miles an hour, but off-road in the high desert it’s more like 35. Once it’s out in the open, it has about five-to-seven minutes to find its firing position, train its rockets on the target, and fire – one rocket every few seconds.

Martin asked the crew chief of one HIMARS, Staff Sergeant Cami White, “How’d you guys do?”

“We did well!” she replied.

“Whenever we get a ‘fire when ready,’ it’s as fast as you can fire it. So with that, I think our time was around three minutes.”

“Three minutes from the time you got the mission, to the time the rockets took off?”

When the HIMARS fires, the rocket exhaust gives away its position, so it has to get out of there fast before the enemy can strike back.

“How long do you have to get out?” Martin asked.

“Oh, as quickly as possible,” said White. “Roughly a minute.”

It’s called “shoot and scoot,” and the Ukrainians are doing it now in their counteroffensive against Russian forces occupying Kherson, making the most of the 16 HIMARS provided by the U.S.

“It’s nowhere near what I think Ukraine could use,” Hodges said. “I mean, look at the effect they’ve achieved with 16. Imagine if they had three or four times that many.”