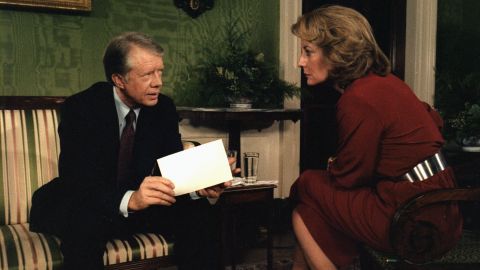 Over the course of a half-century interviewing American presidents, Barbara Walters interviewed the most powerful men in the world about their regrets, their mothers, their marriages – even their sleeping arrangements with their wives.

Perhaps like no one else in the recent history of the American presidency, Walters helped reveal the men in the White House as people, using surprisingly intimate questions during the heyday of appointment television to help Americans understand their leaders on a human scale. The pioneering TV journalist died Friday at age 93.

Walters made news and held presidents accountable, though she was sometimes criticized for being too soft. She moderated presidential debates between Gerald Ford and Carter, and Carter and Ronald Reagan. At moments of national crisis, including during wars and recessions, she asked important questions that shed light on policy and approach.

Yet it was her insistence on locating the character of the president, and mining whatever she found there, that helped usher in a new era of personality in politics, lifting the veil on the inner lives of the men leading the free world.

“Are you mean? Do you have a cold, hard, mean streak? Do those blue eyes get cold?” she asked Carter before inquiring about his bedroom setup.

“You’re more like your mother, people say,” she asked Reagan during a visit to his Santa Barbara, California, ranch in 1981. “Do you think that’s so?”

“Do you discuss these things with your father?” she asked George W. Bush during a conversation about global threats in the months after the September 11, 2001, terror attacks.

She interviewed every sitting president starting with Richard Nixon through Barack Obama, and spoke with Donald Trump and Joe Biden in the years before they entered the Oval Office.

“Barbara Walters has always been an example of bravery and truth – breaking barriers while driving our nation forward. Her legacy will continue as an inspiration for all journalists,” Biden said Saturday on Twitter.

Many of Walters’ presidential interviews included their wives, an opportunity for her to question a first couple about their ambitions, tastes and marriage.

“You wanted him to give up politics. And you talked about it openly. It affected your marriage. You wanted him to get out,” she asked Michelle Obama in 2010. “Is there ever a moment when you say to yourself, one term is enough?”

Instead of holding her presidential subjects at an arm’s length, she visited their ranches, climbed into their jeeps and sat next to their Christmas trees, bringing with her pages of questions that she’d prepared.

She interviewed her first sitting president in 1971, setting up in the Blue Room with a nervous-seeming Nixon, who asked whether her knee-high boots were comfortable.

After a discussion on Vietnam, Walters sought something more: “An opportunity to learn more about this secretive and remote man,” she recalled in her memoir.

“There has been a lot of talk about your image and the fact that the American public sees you as rather stuffy and not a human man,” she asked. “Are you worried about this image, Mr. President?”

So began a decadeslong procession of mining the dispositions of successive commanders in chief.

“I’m fascinated by the personality of our leaders. Who are they? What do they believe in?” she said during an episode of “Oprah’s Master Class” in 2014.

She joined the traveling press corps on Nixon’s landmark trip to China in 1972, one of only a few women among a pack of men, stepping from the Pan Am charter plane in a long shearling coat with a camera strapped around her wrist.

Her most famous interview with Nixon came after he resigned amid the Watergate scandal, questioning him in a live special several years later: “Are you sorry you didn’t burn the tapes?”

“I probably should have,” he acknowledged.

Walters seemed fascinated by presidential regrets. She asked George H.W. Bush – whom she wrote was the president she knew best “on a personal level” – whether he regretted his campaign phrase “Read my lips: no new taxes” after he was forced to, in fact, raise taxes.

“It caused a credibility problem at the time,” Bush acknowledged. “I would have to rank that as not a howling success.”

In 2005, she asked his son, George W. Bush, whether he regretted the US invasion of Iraq.

“But was it worth it if there were no weapons of mass destruction? Now that we know that that was wrong. Was it worth it?” she asked. (Absolutely, Bush said.)

Walters had her own regrets, too. She “couldn’t summon the courage” to ask Ford about falling down the steps from Air Force One. She cringed watching herself gravely asking Carter to be “good to us” at the end of an interview. And she said she was mistaken not to have aired a walk-and-talk interview with Betty Ford when the first lady appeared drunk.

“If I were interviewing a first lady today, and she was obviously inebriated, I would certainly air it,” she wrote.

Sometimes, her questions seemed to foretell coming events. She asked Bill Clinton in 1996 how important it was for the president “to be a role model.” A few years later, she would interview Monica Lewinsky – a former White House intern who became a household name in the 1990s when her affair with then-President Clinton came to light – before a television audience of 70 million people.

“I never felt that I really got through to Clinton,” Walters wrote in her book. “I never experienced his renowned sex appeal. He never sparkled with me.”

Reagan was a different story. Like many Americans, Walters seemed taken with his movie star charisma – though in one interview she voiced some skepticism that his ability to connect was genuine.

“Do you think that any of that is the acting experience?” she asked him.

In the decades since she began interviewing presidents, personal questions have become the norm for politicians and their spouses. Voters have come to expect having a view of their leaders’ personalities, or at least the ones they cultivate for public consumption.

“I used to be criticized for asking those kinds of questions: doesn’t matter, what do we care what he or she thinks? The most important thing is only the hard news question. I don’t think so,” Walters said after she’d retired. “I think it’s important to know what’s important to them. You have to find out, if you can, what makes someone tick.”

This story has been updated with additional details.