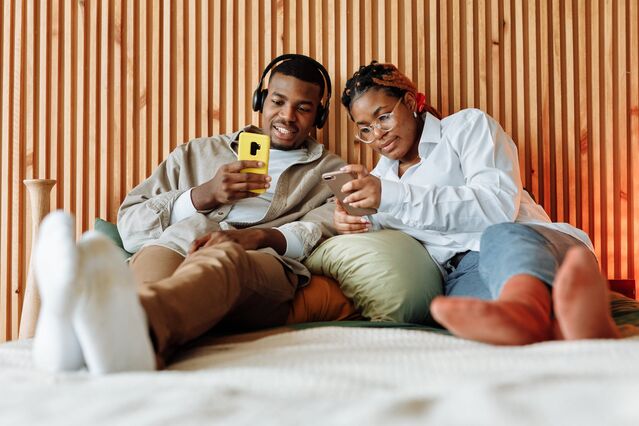 We live in a digital world; there’s no escaping it. Being constantly plugged in can affect our relationships in a variety of ways. On the one hand, it can keep us connected to our social networks—but on the other hand, it can remove us from the present moment and relationships in real time.

What Research Says About “Technoference”

Researchers Brandon McDaniel and Sarah Coyne coined the term technoference, which describes situations in which technology creates interruptions in couple interactions or time spent together. A study they published in 2016 found that participants perceived that technological devices affected their relationships. Those who reported more technoference in their relationships also reported greater conflict over technology use, lower relationship satisfaction, more depressive symptoms, and lower life satisfaction.

One important distinction is between technology used to facilitate connection between members of a couple and that which impedes those interactions. This is important to note because other research has shown that texting, for example, can keep partners connected during the day.

With regard to texting, research by Jonathan Pettigrew (2009) has described that technology has both “push” and “pull” aspects to it. The push is that technology pushes people to communicate with one another in environments in which it would otherwise be difficult or impossible (i.e., a movie theater). However, technology does pull a person into different contexts, thereby taking them out of their immediate surroundings and potential in-person interactions. In that respect, people may not be fully present.

How Couples Use Technology in Daily Life

Consider two couples: Amy and Sean, and Dan and Nina.

Amy and Sean text throughout the day to share that they are thinking about one another. Occasionally they will text reminders, such as about items to add to the grocery list or about picking up the dry cleaning. However, most of their exchanges center on their connection as a couple. When home, they make sure to have technology-free dinners so that they can discuss their day.

Dan and Nina, on the other hand, typically use technology as an escape. They don’t really use their phones during the day, as they are busy with work. They tend to pick them up at the dinner table or when watching TV together at the end of the evening to catch up on emails or check social media.

The first couple, Amy and Sean, are using technology to connect, whereas Dan and Nina are using it as an escape. Sure, they may not intentionally be escaping one another, but the pull toward emails and social media is pulling them out of their present relationship.

While social media can be a great way to connect with those we haven’t seen in a while and keep in contact with family, coworkers, and friends, it can have some negative side effects, especially when it comes to our romantic lives. Be conscious of how you use social media, both in terms of the amount of time you spend on it and how you choose to engage with your partner using it.