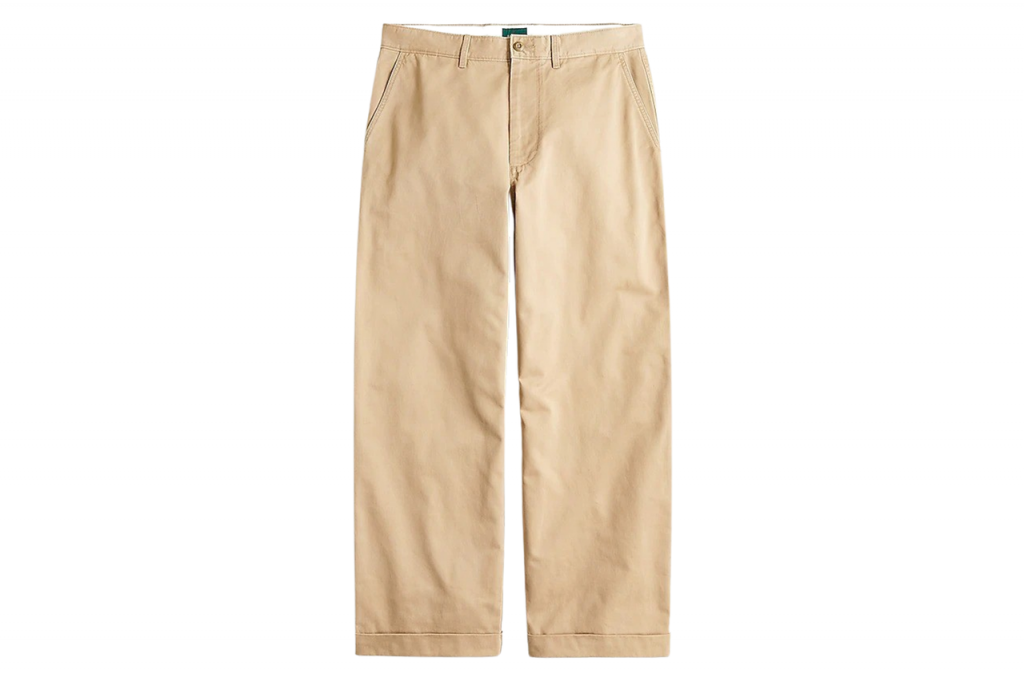 Much of Babenzien’s first collection wouldn’t feel out of place in J.Crew’s Liquor Store in the late aughts—which makes sense, given that Babenzien has spoken at length about not wanting to mess too aggressively with old-school J.Crew vibes. But these pants are unmistakably different. The fit “was just different than any of the other product offerings,” Morales explained. “It felt fresh and bold.” The pants didn’t just stand out to Morales either. Online, they’ve already become the subject of memes—and seem to have become the item luring guys into stores and dressing rooms to test-drive the new fit.

You can figure out a lot about your appetite for the new J.Crew based on how you feel about the Giant-fit chinos. The comment section on the brand’s Instagram account has devolved into a game of tennis between pant lovers and haters. “The pants 🔥🔥🔥🔥🔥,” reads one comment, immediately followed by “Horrible baggy pants.“ J.Crew understands that Giant chinos aren’t what typically flies off its shelves. “While we know that the slimmer fit chinos are historically bestselling, we’re trying to create a more universal portrayal of what’s authentic for the brand,” the spokesperson says. “A single fit isn’t fair to the brand or the consumer. By taking a fresh approach to the nostalgic 90’s fit, the ‘Giant-Fit’ style is opening a door for wider pants that we’re going to be seeing more of in the future.”

It seems safe to say that the giant-fit chino is finding fans not in classic J.Crew customers but in folks interested in a more aggressive strain of fashion. These are pants for people who have more than a casual interest in menswear, who know about Babenzien and have been eagerly awaiting his first collection, and who even listen to podcasts about menswear. (“I heard Babenzien on ‘How Long Gone,’” Heldman said; Chris Black, one of the podcast’s hosts, runs a consulting businesses that lists J.Crew as a client.) Making a splash in menswear these days often means making a splash online, with people like these—who are just as excited for the online discourse about a new J.Crew collection as they are about the actual clothes. J.Crew knew it could widen its comfort zone, leg opening, and customer base in one fell swoop with these chinos. “We are now attracting new customers who are already interested in a looser fit,” the spokesperson says. “They feel fresh.” But J.Crew’s real success will be defined by the guys who don’t have a clue the brand has a new designer—the ones who stumble into their local store, notice something is different, and decide to give it a whirl.

So far, though, the giant-fit chino feels more like a niche hit. When Heldman and her boyfriend got to the register, each clutching their own pair of Giant chinos, the woman checking them out was relieved. “Oh my god,” she said, according to Heldman. “We’ve been trying to push these like crazy, they’re on every men’s mannequin.” And even though there’s a brand new J.Crew, some things are more resistant to change. “In classic J.Crew fashion, the store was having a sale,” Heldman says, “so she gave them to me for 30% off.”