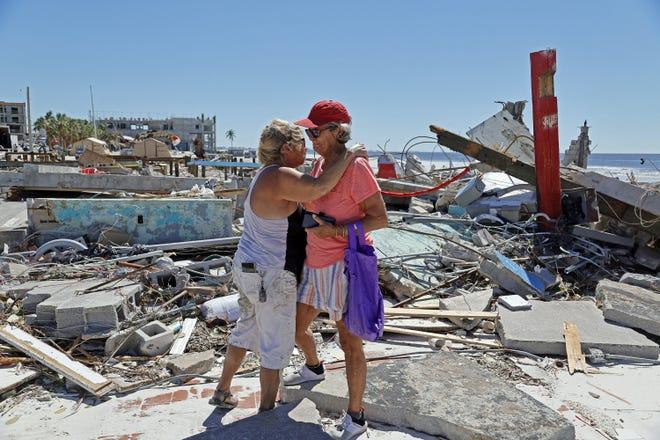 The old quote claims that “90% of life is showing up.” I wonder if the other 10% is geography.

The power of nature is a humbling thing. It can instantly make the rich poor, the comfortable uncomfortable, the safe unsafe.

But that hurricane didn’t hit the whole country with the same magnitude. Just Florida, as hurricanes have hit Florida before.

JEFF SEIDEL:Hurricane Ian hits ‘Michigan south’ and it affects all of us, even the Lions

So it’s possible that people living there, especially poor, long-term Floridians with few options to move, might be saying to themselves, “Why us? If we were born someplace else, we wouldn’t have to endure this.”

A different type of devastation

The same can certainly be said for Ukrainians, some of whom last week saw their lands, their homes and their heritage usurped by a dictatorial leader named Vladimir Putin, who decided to claim their regions as his own.

With sham votes and phony ceremonies, Putin declared those people — who had grown up Ukrainian, voted Ukrainian, always thought of themselves as Ukrainian — would now be considered Russians “forever.”

In a bogus event, he had four puppet leaders sign papers that started the annexation process, then shook their hands and chanted, “Russia! Russia!”

Imagine those Ukrainian citizens, who have already endured war, destruction and their countrymen fighting, dying or relocating to foreign lands, all because they happen to border a nation with a lunatic as its leader.

No doubt they look out to peaceful parts of the world and wonder, “Why us? If we didn’t live here, we wouldn’t have to endure this horror.”

A world apart, but not far away

In Haiti, such thoughts are a daily mantra. Life there is hard to imagine for those of us who live and move freely. Right now, the Haitian government is a prop, the gangs control the streets of Port-au-Prince, and you cannot move a mile to your left or right without risking danger, attacks or the inability to get back home.

People are so fed up with the endless poverty, violence and basic lack of services like electricity or clean water, that they have taken to revolting by blocking roads, knocking down telephone poles or trees, and throwing rocks at anyone trying to pass.

This only exacerbates the misery of the average Haitian, who already can’t get fuel, can’t find open stores, and must scrounge for food in a nation where the average daily salary, if you can find work at all, is $3.50 a day.

Haiti, only 700 miles from America, isn’t even its own island. It shares the land with the Dominican Republic. Yet on that side of the border, life goes on peacefully. Cars pass. People work. Tourists visit.

So close, and yet impossibly far away.

Location may be everything

Don’t you think Haitians, enduring their hardships every day, ask themselves “Why us? If only we weren’t physically here, we wouldn’t have to endure this.”

Yet they can’t leave, because they can’t get visas to travel almost anywhere else. Some take what they have and flee, hoping to find sanctuary as refugees in someplace safer, because almost any place is safer than where they are.

It’s tempting for outsiders to cluck their tongues and say, “Well, why don’t they just move?’’ But moving is not so easy. Even if you can surmount the legal obstacles — paperwork, passports, etc. — leaving a home, perhaps the only home you’ve ever known, where you’ve lived, loved, worked, laughed, where your memories are made and your relatives are buried, well, it’s gut-wrenching.

Next time we express our gratitude for the who’s and what’s that we’ve been given, we might consider adding the where’s.