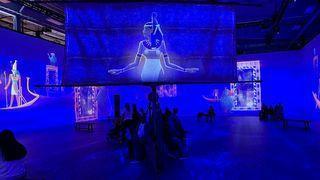 At “Beyond King Tut: The Immersive Experience,” images of art from Tutankhamun’s tomb are projected on screens that surround visitors. Photo: Clifford A. Sobel

Attendance is sluggish at movies and museums, but people are flocking to “immersive” shows that let them walk around (virtually) in a Van Gogh painting, King Tut’s tomb or a surreal fantasy world.

Why it matters: People are yearning to ditch their sofas and phone screens for transcendent experiences that let them move around and mingle, untethered from a theater seat or virtual reality headset.

Driving the news: The surprise popularity of the half-a-dozen competing immersive Van Gogh exhibitions that hit the U.S. during the COVID-19 pandemic helped open the floodgates for similar shows, which make world-class art and artifacts more accessible and engaging.

Now you can also wander through the works of Monet and Klimt, and Frida Kahlo and Diego Rivera.

The trend is hitting airports and transit stations too: A new installation at Newark Liberty International Airport was designed by Moment Factory, which also put on a “color bath” at Tokyo’s Shinjuku Station and multimedia diversions at Los Angeles International Airport.

What they’re saying: When the Van Gogh show hit Paris in 2019, “I couldn’t understand how you could have a very successful immersive show in a market where you had all the greatest museums in the world, and then I realized that it was a new art form, if you will,” Paquin said.

Yes, but: Critics and audience members have called some shows underwhelming, cheesy and expensive.

The bottom line: Shows that blend art, music and an upbeat ambience dovetail nicely with today’s zeitgeist of wellness, mindfulness and mental health.