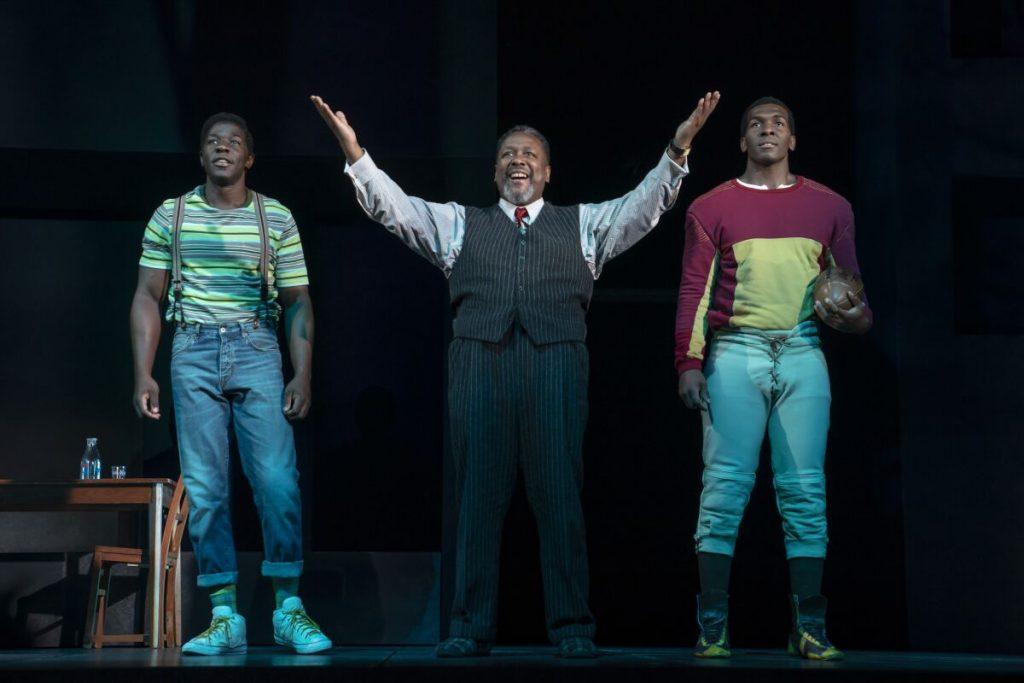 It’s been a long time coming, but change has finally arrived on Broadway, where for the first time Willy Loman and his family are played by Black actors.

This historic production of Arthur Miller’s “Death of a Salesman,” which opened Sunday at the Hudson Theatre, ultimately registers the full seismic shock of this modern American classic. But it takes a while for the tremors to be felt in a staging that sacrifices precision for fluidity.

The revival, which originated at London’s Young Vic theater, often gets in the way of itself with arty maneuvers that distract from the work’s emotional core. And the casting of Black and white actors in a noncolorblind manner inevitably raises questions about race and history that are left stubbornly unanswered by the play.

At its best, however, this production brings a heightened societal awareness to an anguished family drama that is already unusually sociopolitically astute. A 21st century Miller would no doubt approve of the progress of his evergreen critique of the American dream.

Wendell Pierce (best known for his work on “The Wire”) and Sharon D Clarke (lauded last season in the Broadway revival of “Caroline, or Change”) reprise their heralded performances of Willy and Linda Loman. Rising in tragic stature as the play barrels toward its shattering conclusion, these performers make the production unmissable.

The New York company includes Khris Davis as Biff and McKinley Belcher III as Happy — Willy’s two sons, one a derailed golden boy haunted by his unrealized promise, the other a compulsive philanderer unable to relinquish his juvenile illusions. André De Shields, still riding high from his Tony-winning triumph in “Hadestown,” practically levitates as Willy’s brother, Ben, a character who enters the play on a cloud of surreal remembrance.

Without in any way overstepping the bounds of the role, Clarke transforms Linda into the fulcrum of the drama. Her portrayal of a wife standing by her husband as his life comes undone is realized with such wrenching delicacy that for the first time Miller’s tragedy belongs as much to Linda as it does to Willy.

Of all the cast members, Clarke is the best able to maintain her realistic footing in the shifting ground of Miranda Cromwell’s production. Pierce, less secure in the early going, gains in power as Willy’s inner devastation unleashes the play’s cathartic force in a flood of tears that sweeps all obstacles in its path.

In London, the production was co-directed by multiple Tony-winner Marianne Elliott, one of the most bankable auteurs working today. Cromwell and Elliott set out not simply to recast the Loman family with Black actors but to reinterpret the drama as a work of theatrical jazz.

Miller had contemplated calling the play “The Inside of his Head,” an indication that “Death of a Salesman” isn’t built on a cement foundation of realism. This is a work of memory, shuttling between past and present, as Willy is finally cornered by reality to confront the shame and disappointment he has tried to conceal under a lifetime of bluster.

Cromwell, however, treats the play as though it were carved entirely in air. The scenic design by Anna Fleischle allows only the barest minimum of set pieces to swoop in from above and sketch the various settings. Incorporating live music as a theatrical emollient, the staging risks turning “Death of a Salesman” into a funhouse with an array of expressionistic effects that only the great De Shields is able to stylishly pull off.

The actors have the burden of manufacturing not only place but also political and historical context. Some fuzziness is inevitable in a production that can’t decide its exact relationship to Miller’s lower-middle class Brooklyn.

Bernard (Stephen Stocking), the earnest kid who lives next door to the Lomans, is certainly a throwback to the old neighborhood of the playwright’s youth. He and his father, Charley (Delaney Williams), are played by white actors, which complicates how we understand the more prosperous background of these characters.

There’s a suggestion that the relative affluence of these neighbors is a legacy of white privilege. But Miller sets up the contrast in households to throw into relief the warped values Willy has fostered in his sons.

Willy and his boys ridicule Bernard for being a studious nerd. His diligence and earnest respect for the rules make him a loser in their book. Young Biff is a winner not only on the athletic field but also with the opposite sex. When his sports scholarship is endangered by a failing grade in math, he seems less concerned about the consequences than worrywart Bernard

As adults, Biff and Happy are suffering the consequences of their father’s salesman creed, which preaches that appearance matters more than substance. By contrast, Bernard, who becomes a successful attorney, shows what hard work and delayed gratification can achieve even in a country rigged against the little guy.

The production tosses out provocative ideas but then rebuffs close scrutiny of their relationship to the actual play. We are not meant to ponder in too much granular detail the historical challenges of a Black family in late 1940s New York.

Yet there are times when the production seamlessly augments the playwright’s vision. When Willy is discarded (in his own words) like the peel of an eaten orange by Howard (Blake DeLong), his callous young white boss, the cruelty of capitalism is compounded by the heartlessness of racial exploitation and oppression.

The abject servility with which Pierce’s Willy rushes to retrieve the lighter that Howard has dropped on the floor, speaks volumes about powerlessness. Yes, Willy is defying his own advice to Biff to never show inferiority. But hierarchy in America — be it racial, economic or some combination of the two — cannot be wished away.

“Attention, attention must be paid to such a person,” Clarke’s Linda mournfully says to her sons about their father. Her words accrue added layers of pain when applied to a man who’s expendable not only for being old and mentally wrecked but also for being Black in a hegemonic white culture.

But these implications can’t be fully elaborated here. “Death of a Salesman” isn’t an August Wilson play. History is treated impressionistically. And there is only so much that infusions of gospel singing can say about a subject not considered by the author.

Yet the play’s power to unsettle remains intact. The father-son conflict between Pierce’s Willy and Davis’ Biff is at once universal in its pattern and freshly particular in its pathos.

Even more striking is the way that motherhood is no longer relegated to second place in Miller’s drama. Thanks to Clarke’s heartbreaking brilliance, the role of Linda is finally given her due.