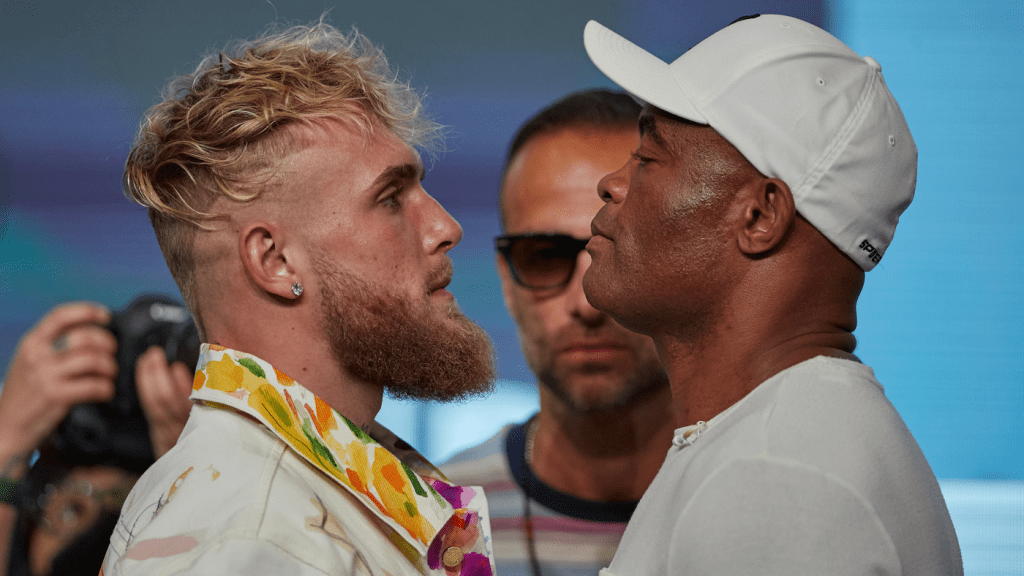 Since entering the world of professional boxing, Jake Paul has drawn no shortage of attention. Now set for a showdown with UFC legend Anderson Silva on Saturday night, Paul faces what should be the stiffest test of his young career (9 p.m. ET, Showtime PPV).

Silva is the first opponent Paul has faced who will enter the ring with a professional boxing record — not counting Paul’s rematch with Tyron Woodley. In fact, Silva holds a victory over former world champion Julio Cesar Chavez, which showed how capable the former UFC middleweight champion is of using his unorthodox movement to fluster opponents inside the boxing ring.

“When you fight in combat sports you have to be a little crazy. I’m a little crazy, too. This is not for everyone. Everyone here are special guys and for sure everyone here is a little crazy,” Silva said at the final press conference. “This is a competition and I’m training hard to make a great show for everyone. This fight is very special to me. I try to do my best because I love fighting and I love my job and now I’m free to do everything I like to do.”

Some have questioned why Silva has decided to take this fight and if it would change how he’d be viewed in the MMA sphere. But the legend is not worried about any of that, he just wants to show how well he can box at 47 years old.

“I don’t believe this affects my legacy, in my journey in combat sports. I try to do my best to give something to the new generation,” Silva said. “Jake and I are bringing two big generations together and people think this will affect my legacy or affect Jake’s legacy, but I don’t believe that because it’s about passion and love.

“Everyone always asks, ‘Are you sure you want to face Jake Paul? He’s beating a lot of guys in the UFC.’ I say, ‘Yeah, I think I’m ready for that. He’s younger than me but I’m a superhero.'”

Can’t get enough boxing and MMA? Get the latest in the world of combat sports from two of the best in the business. Subscribe to Morning Kombat with Luke Thomas and Brian Campbell for the best analysis and in-depth news, including a complete preview of Jake Paul vs. Anderson Silva below.

Many thought Paul’s handlers would look to keep him away from Silva, a bigger, slicker and more prolific striker than anyone Paul has faced to date. But the risk has been taken and now Paul will look to take a big step forward and prove that he is continuing to build the skills necessary to make some noise as a serious boxer.

“For sure I have more pressure on my shoulders. Just being the ‘A’ side, and the amount of shit I talk I think the entire MMA community is waiting for me to lose,” Paul said at the final press conference. “They want me to lose. I just have so many more big ideas and plans in this sport and I just plan on being here forever. This is the start of that, and the pressure is on.”

The undercard fills out with a blend of young prospects looking to make a name for themselves and more celebrity attractions to get some more casual fans interested. Ashton Sylve, the 18-year-old super featherweight, is back in action when he takes on veteran Braulio Rodriguez. Vets Alexandro Santiago and Antonio Nieves are set to throw down at bantamweight. Plus, former UFC middleweight Uriah Hall makes his pro boxing debut when he takes on former NFL running back Le’Veon Bell, who is also making his pro debut. And opening up the festivities will be combat sports veteran Chris Avila when he takes on social media star Dr. Mike Varshavski.

“Fighters fight and it changes when you have to go out there and you have to adjust. We’re both fighters at the end of the day. He’s a powerful dude. I know he’s confident,” Hall said at media day. “You can’t really focus on those outside negative affirmations. You have to stay present and I’m just looking forward to having some fun. He’s a challenge, it’s a step-up, it’s outside my comfort zone and I love a challenge.”

Below is the complete fight card along with the latest odds from Caesars Sportsbook before we get to predictions and picks on the main event.

Brent Brookhouse: I was initially among those who felt Paul should be kept away from Silva. But there are a lot of little things that start to stand out when you really look at the fight. Paul has gotten clearly better fight after fight, there is no way anyone can legitimately argue otherwise and be taken seriously. Like almost any young fighter just five fights into his career, there are still plenty of areas in his game that still need work, but he appears to be very coachable.

Paul also has one of those “you have it or you don’t” qualities in his punching power. You can see it in his fights and legitimate boxers who have worked with him have said it as well. Paul can thump.

It’s possible Silva is too slick for Paul, but I think Silva will fall into his tendency to get cute with his defense, which can work and frustrate opponents. But against Paul, I think he will trap himself along the ropes and Paul has the discipline to work to the body instead of headhunting. That will, in turn, open up some clean shots to a chin that isn’t what it used to be. Look for the Paul finish in the middle rounds Pick: Jake Paul via KO Rounds 4-6

Brian Campbell: Provided Silva doesn’t begin to feel his age overnight in ways he has yet to show us during this twilight of one of the most decorated careers in combat sports history, this is his fight to win in just about every category. Yes, Paul is much younger and has good size and power. But the gap in both experience and technique should show rather large provided Silva is able to keep up whatever pace his younger opponent sets. Not only has Silva adjusted flawlessly to the major differences between boxing and MMA (including footwork), he has proven in a handful of pro fights — including a 2021 upset of former middleweight titleholder Julio Cesar Chavez Jr. in Mexico — that he’s a legitimate threat to hit Paul with the kind of fight-altering counter shots he doesn’t see coming. Silva is the same size as Paul and might even be faster in terms of his hand speed. The biggest issue for Paul may prove to be that the more he looks to take the fight to Silva, the more he might find himself entangled in the web of the “Spider,” who excels at lulling his prey into a false sense of security before countering spectacularly. Pick: Anderson Silva via TKO6

Shakiel Mahjouri: Silva presents so many problems for Paul. Silva has superior size, stamina, head movement, feints, footwork, movement, combinations and an ability to strike from angles. Paul, understandably, employs a fundamentally basic game built around his jab. A focused Silva should be able to roll with the shots and pick apart Paul.

Certainly, Silva’s age is a concern and his chin must be degrading at age 47, but those worries are a touch overstated. He has only suffered two fight-ending blows to the head in his 46-fight MMA career: once against Chris Weidman with his hands down and once against a hard-hitting Uriah Hall. His chin could be an issue, but it’s not his Kryptonite.

The chances of Paul rightfully winning the fight via decision are rather low. He’ll have to rely on his power to squash “The Spider.” Silva has decades of boxing experience over Paul, even if it was primarily modified for MMA. A flush knockout early, a TKO against an exhausted Paul or a tidy decision are all in play for Silva. Pick: Anderson Silva via KO4