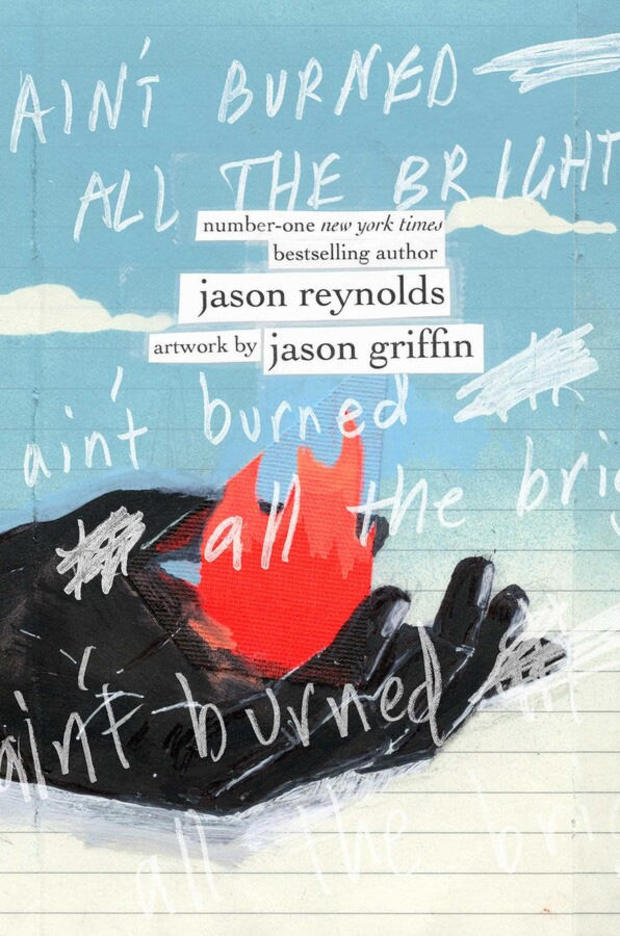 Jason Reynolds is not only a prolific and bestselling author, he’s also the national ambassador for young people’s literature.

“How does one properly address an ambassador?” asked “Sunday Morning” host Jane Pauley.

“By my first name!” he laughed.

He visits mostly out-of-the-way towns, like Ronan, Montana, on the Flathead Indian reservation, where he met with middle-school students.

Pauley asked, “When you talk to kids, I’ll bet you have them way before ‘hello’?”

“I hope so!” Reynolds laughed. “When I walk out, 16-year-olds, or 12-year-olds are happy that I look like someone who might be able to connect.”

“They’re all listening,” he replied. “I don’t sell them on books by selling them on books. The fastest way to lose a child is to tell a child to read.”

Don’t nobody
believe nothing
these days

Which is why I haven’t
told nobody the story
I’m about to tell you.

From “Long Way Down”

Reynolds evokes his own childhood experiences in his 17 books (many published by Simon & Schuster, a division of CBS’ parent company).  “I’m thinking about young Jason, the kids in my neighborhood,” he said.

“I think that they run the gamut. You have to remember these books are all over America, and all over the world.”

“But, unfailingly, you are writing about a Black child.”

“Absolutely. My belief is that I get an opportunity to write them into the world. That they are matter, and that they do matter.”

“I did not have to rely on schooling to give me my visibility, because I had a mother who had more than enough!” he laughed. “So much of my stories are about friends, and the reason why is because I actually think that friendship is the most valuable relationship we’ll ever have.”

Before he was a prolific poet, he was a precocious 16-year-old college freshman. At the University of Maryland, in 2000, he met classmate Jason Griffin, who described the young Reynolds as “kind of a man, a man-teenager. He was, like, 6’3″, 220 pounds, just a towering figure.”

“But,” Reynolds said, “I didn’t have any friends.”

One day, seeing Reynolds sitting alone in the dining hall, Griffin was intrigued: “And he has this cool crocheted hat, and so there’s my entry. ‘I really like your hat.’ He was like, ‘Yeah. I made it.’ And I was like, ‘O…kay.'”

“I would make my own hats, and bags, and everything,” Reynolds said. “It was cool to him, but I’m sure there were some people who were like, ‘That’s strange. He’s this hippie kid!'”

Griffin said, “People were definitely surprised when they came into our room and ‘Monday Night Football’ was on, and there’s a bunch of big dudes sittin’ around crocheting.”

“That’s right – everybody had to do it,” said Reynolds. “Once I figured out that it was cool for my friends, I was like, ‘I can teach you all how to do this!'”

They left college with a book – Reynolds’ poems, Griffin’s artwork. It went nowhere, and Reynolds sold clothes for the next five years.

But today, Reynolds is a phenomenon in young adult literature. He’s sold more than seven million books, including “Stuntboy” (“the greatest superhero you’ve never ever heard of”).

Reynolds might be the bestselling author you’ve never heard of. And for only the second time in 20 years, he and his longtime friend have collaborated on another book.

Pauley asked Griffin, “I can’t help but note the obvious: you have red hair and blue eyes. You are the whitest man in this room.”

“So, your collaboration with the most successful author of young adult books, who’s writing to Black children for all children, where do you come off?”

Reynolds said, “Jason and I have had every uncomfortable conversation you can have, and figured it out together. I think if anything, perhaps that can be modeled – a friendship, an honest friendship. As much as I love my culture, love being Black, I also love my friend. Both of those things can coexist.”

Their latest project, “Ain’t Burned All the Bright,” is about a kid who’s home at the height of the pandemic and the protests over the killing of George Floyd.

Pauley said, “The narrator goes hunting for an oxygen mask. Family is in quarantine. And by the end realizes something important.”

“That all the air you’ll ever need is in the boredom of your life,” Reynolds said, “that the magic is in the minuscule, the mundane.”

A few of his books have been banned in some places, like “All American Boys,” about two students.  One, who is white, witnesses a police officer beating up a classmate.

I was barely twenty feet away. The guy on the ground was black and he looked like he was around my age …  smashing his face into the sidewalk. The blood kept coming.

“If it’s a story about race, some white parents are saying that, ‘I don’t want my child reading this because I don’t want them to feel bad about being a white child,'” said Reynolds. “Which is never my intention, by the way. But it’s being spun as a controversy, as a way to sort of put the kibosh on complicated conversations that kids are desperately trying to have.”

Jason Reynolds is still, happily, comfortably having those complicated conversations. During one of his many school and library visits, a 12-year-old raised his hand: “He says, ‘Why is it I almost never see white people in your books?’ Now you could feel the air suck out of the room. And my response is, ‘Well, it’s because I grew up in an all-Black neighborhood. It’s all right for those neighborhoods and experiences to be lifted up. Does it bother you?’ Now, at this point everyone’s holding their breath, as you can imagine.”