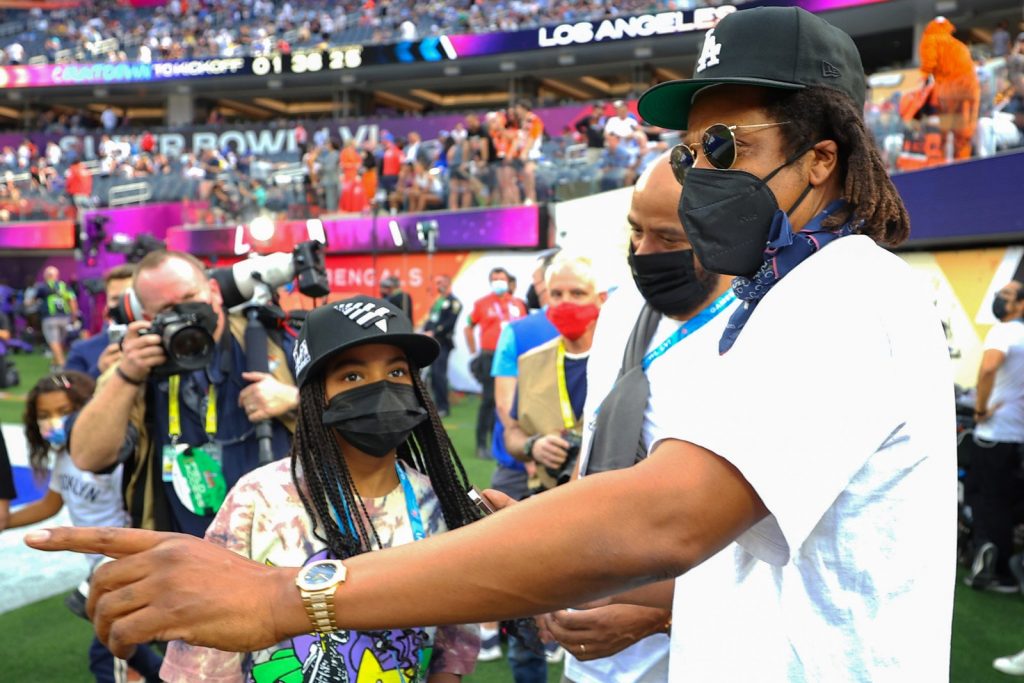 Jay-Z was all smiles during Game 5 of the NBA Finals in San Francisco on Monday night, sitting courtside with his eldest daughter, Blue Ivy Carter. Meanwhile, Blue, who is ten, kept it cool, as tweens are wont to do, even when Pops brought her in for a big kiss on the cheek on the Jumbotron or dapped up Steph Curry after the Warriors beat the Celtics 104-94. Dads, right?

Jay and Blue coordinated in all-black outfits for the game, though it’s hard to imagine Blue would cop to matching on purpose for the occasion. Jay sported a Puma chore coat to go with a pair of Puma lows modeled after the pairs NBA legend Ralph Sampson wore in the ’80s. (Puma appointed Jay as the brand’s creative director of basketball back in 2018.) Blue, under no such contractual obligation, wore black-and-white “Panda” Dunks (the sneaker of the moment) and a leather biker jacket over a tee that read “Brown Skin Girl,” a nod to the song whose music video won Blue—and her mom, Beyoncé—a Grammy in 2021.

They also both wore sunglasses while walking into the arena, confirming that wearing sunglasses indoors is truly one of the most glamorous things a celebrity can do.

This wasn’t the first capital-B Big Game for Jay and Blue this year: the Carter family made an appearance at the Super Bowl back in February. (Another nota bene: Jay’s company Roc Nation produced the game’s halftime show.)

Even then, Jay, despite his very luxe Patek Philippe Nautilus, got lapped by Blue in the outfit department—but then again, it’s hard to look cooler than a 10-year-old wearing an Online Ceramics tee.