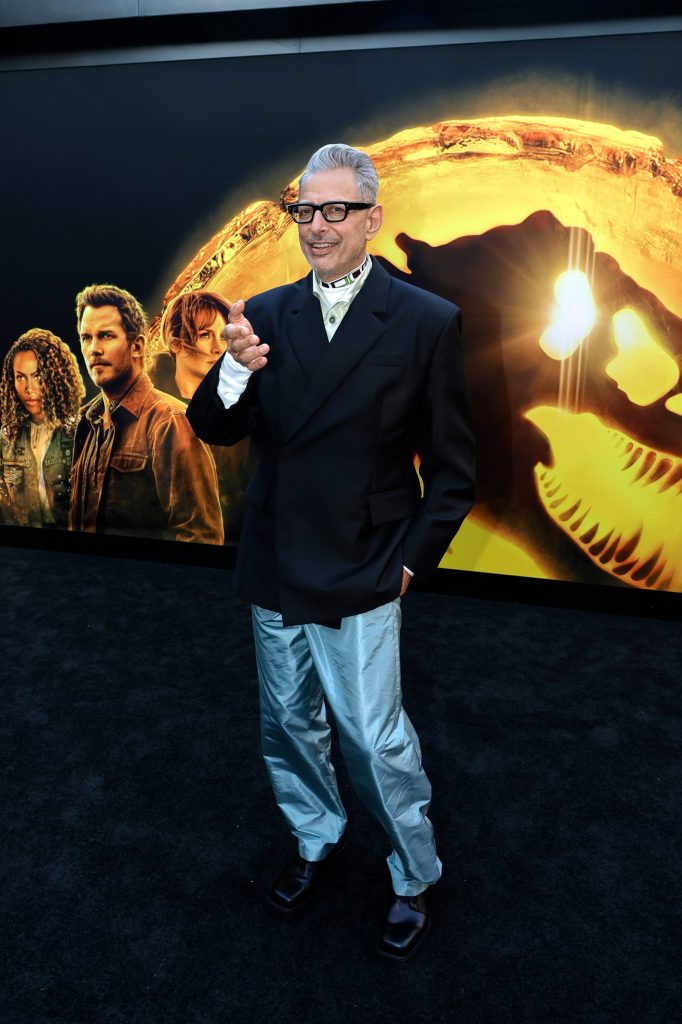 It’s no secret that Jeff Goldblum loves getting dressed. Lately, that’s meant something pretty specific: all those beautifully boxy printed shirts, say, usually with a pair of jeans, some killer boots, and a leather jacket. But for the press blitz for the newest Jurassic Park movie, Goldblum is trying something new: a never-ending run of shiny pants that are heavy on the delight.

The shimmering pants party started earlier this week at the blockbuster’s Los Angeles premiere. Goldblum wore a pair shaded in light turquoise with a dressy double-breasted blazer showing just a hint of an equally shiny shirt underneath. Two days later, Goldblum was in New York and had not one but two pairs of pants on deck. In a single day, we saw him in both black and white: the former paired with a breezy long-sleeve camp collar and the latter with a very 90s-inspired long-sleeve-under-a-button-up. It’s hard to tell if these are Prada’s signature nylon or something more grandiose. (Although given that Prada sent treated silk down the same runway show Goldblum walked in, one would guess that’s what we’re seeing here. And, anyway, shimmering silk feels like Goldblum’s id in fabric form.) And, of course, all of this week’s looks included his go-to frames, courtesy of his beloved Jacques Marie Mage.

Goldblum has never been one to shy away from showy materials. He loves velvet suits in all sorts of colors and has been known to dabble with sequins, too. But shiny, swishy pants feel like new territory for our most adventurous dresser—and you better believe Goldblum loves exploring new territory.