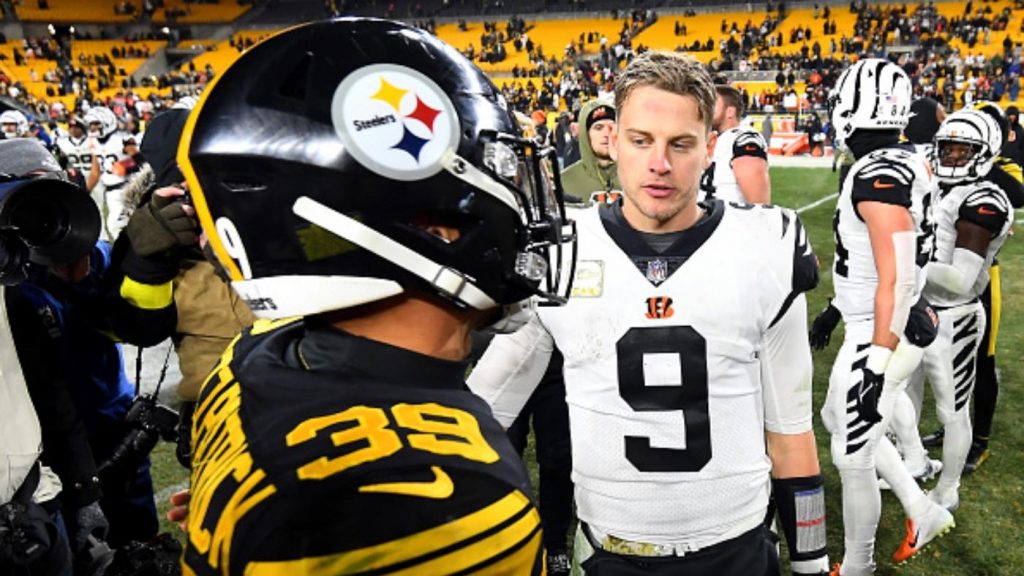 PITTSBURGH — Joe Burrow adjusted his hair, then exhaled before beginning his postgame press conference. With the booming sound of the Bengals’ celebratory locker room music echoing behind him, the Bengals quarterback shared the significance of Sunday’s 37-30 win.

After an 0-2 start, the defending AFC champions now stand at 6-4 after defeating a Pittsburgh team that upset them 10 weeks earlier in the season opener. That game now seems like a distant memory for Burrow and the Bengals, who latched on to the seventh and final AFC playoff seed following Sunday’s win.

“That was awesome. One of my favorite wins since I’ve been here,” said Burrow, who improved his career record to 3-2 against the Steelers. “Lot of adversity. AFC North game. Bad weather. Cold, windy. We fought through, found a way to win.”

A four-point favorite, the Bengals found themselves trailing at halftime after Levi Wallace’s pick of Burrow late in the half set up Pittsburgh’s go-ahead field goal. The Bengals trailed at halftime despite two first-half touchdown passes from Burrow, who at one point in the first half completed 11 straight passes.

Cincinnati showed its mettle in the second half. Despite playing without Ja’Marr Chase and losing running back Joe Mixon during the game, the Bengals took the lead for good when Burrow hit Trenton Irwin on a 1-yard touchdown pass midway through the third quarter. After both teams exchanged field goals, the Bengals essentially ended the game with an eight-play, 93-yard drive that ended with Burrow’s third touchdown of the game to Samaje Perine, who had an extended role with Mixon out with a head injury.

“Every role you ask him to play, he’s going to do it,” Bengals coach Zac Taylor said of Perine after the game. “Whether it’s the second-half feature back when Joe’s out, whether it’s playing his role on third down or some of the other packages they put him in. He’s just as reliable as they come. Very dependable. We don’t take him for granted because we understand how valuable a piece he is for our team.”

The big play on the drive was Burrow’s 33-yard completion to Tee Higgins, whose 148 receiving yards is the second-highest total of his career. Burrow also completed passes of 27 and 15 yards on the drive to Tyler Boyd, a Pittsburgh native who did not catch a pass until that drive.

“We didn’t see the easiest looks tonight,” Taylor said of the Steelers defense. “They did a good job packaging their stuff. … They tried to put a lot of pressure on us, especially on second down. Joe, I thought, handled that really fine and found the guy who had the best matchup.”

All told, Burrow threw for 355 yards with four touchdowns. He threw two interceptions that included T.J. Watt’s incredible snag that put the Steelers in position to take the lead late in the third quarter. But instead of taking the lead, the Bengals defense stiffened and forced the Steelers to settle for a field goal.

Burrow did have something to say to his counterpart on Sunday, Kenny Pickett. Burrow was in Pickett’s shoes two years ago as a rookie quarterback who was going through the growing pains of being a first-year starter. In what was his sixth career start, Pickett threw for 265 yards (his second-highest total of the season) with a touchdown and no interceptions.

“I thought he did great today,” Burrow said of Pickett, who led the Steelers on a late scoring drive that briefly gave Pittsburgh life. “He can build off of that momentum that he showed today. He’s got some young guys around him that he can build some chemistry with. I think he did a great job today. I told him after the game to continue to build off of this one.”

Eli Apple, the Bengals veteran quarterback, also threw praise in Pickett’s direction after the game. Specifically, Apple was asked to compare facing a Ben Roethlisberger-led Steelers offense in recent years to the Pickett-led Steelers offense he and his teammates faced on Sunday.

“He’s younger. His legs are younger. He’s able to extend plays,” Apple told CBS Sports. “Made some big time throws under some pressure. I thought he was gutsy out there.”

Apple had even more to say about his own quarterback, who on Sunday night matched Kurt Warner as the third-fastest quarterback to reach 10,000 career passing yards.

“Anytime you have somebody like Joe who is really calm and cool under pressure, it of course makes it easier on everybody,” he said. “He was just flowing out there. Nothing was phasing him. He was getting that ball out. Linemen were blocking. Receivers were making tough catches. Just overall a great team effort.”

How did the Bengals have so much success against the Steelers defense — which had both Watt and Minkah Fitzpatrick on the field together for the first time since Week 1 — despite not having Chase or Mixon? Pittsburgh’s scheme, tight end Hayden Hurst, played into the visitor’s hands.

“They ran a lot of two-high stuff,” Hurst said. “They tried to disguise a lot of stuff. They mixed some man in there, too. Man is what we do best as a team. We took advantage of it.”

It would have been hard to fathom Sunday’s postgame scene two years ago. Back then, the Steelers won their 10th straight game over the Bengals, who were on their way to a fifth consecutive losing season. Things are certainly different now. At 3-7, the Steelers are on the verge of their first losing season in nearly 20 years. Conversely, the Bengals are hoping to parlay Sunday’s win into a second consecutive trip to the playoffs.

“We were able to do it last year,” Higgins told CBS Sports after the game. “We know what it feels like. But this is a new year. To get this road win, the second half the season, it feels good, and hopefully we can do it again next week.”