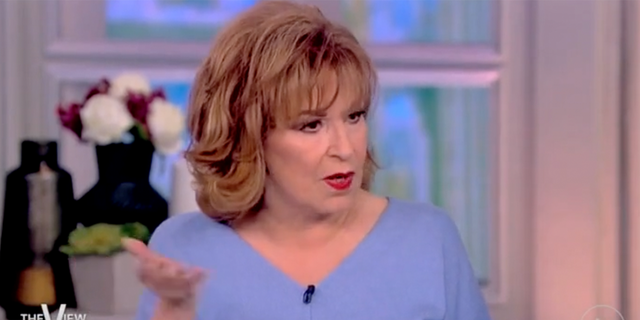 ABC’s “The View” co-host Joy Behar suggested Friday that actor Alec Baldwin was criminally charged over the accidental on-set killing of a cinematographer because of his liberal politics.

During Friday’s episode of the daytime talk show, Behar was unsure whether Baldwin deserved being charged with involuntary manslaughter in the death of “Rust” cinematographer Halyna Hutchins and claimed that the person who indicted him is a “big Republican.”

“The DA who is indicting him — or whatever the legal term is right now — she’s a big Republican. I’m only saying this because Alec Baldwin is a target for Republicans. They cannot stand him, OK? I’m just saying,” Behar said.

The remarks earned a groan from co-host Alyssa Farah Griffin, prompting Behar to add, “I’m not saying anything more than that!”

Joy Behar is skeptical about whether Alec Baldwin deserved charges in the “Rust” movie shooting.
(Screenshot/ABC)

Hutchins was killed during filming in October 2021 when a gun Baldwin was holding fired a live round at the film crew. According to protocol, there should have never been any live rounds used on set.

Andrea Reeb, the special prosecutor appointed by the DA to the case, said in a statement, “The evidence clearly shows a pattern of criminal disregard for safety on the ‘Rust’ film set. In New Mexico, there is no room for film sets that don’t take our state’s commitment to gun safety and public safety seriously.”

When discussing the charges, Behar seemed skeptical whether Baldwin deserved them.

“I have to say, before I even throw it out there, that there were four other producers on the show who have not been charged, on the movie,” she said. “Why? That’s one question I have. He is — he was a producer of story credit. So, he had creative involvement, not exactly the job of somebody who would have to check the gun. That’s the job of other people.”

The co-host empathized with the actor, claiming that when she would be on set, she was more worried about herself and not the props, which were other people’s responsibility.

“As a person who’s been in a couple of movies, all you’re thinking of is your part when you are an actor,” she said. “You’re not worried — I was not worried that that set — my brassiere’s going to fall off me or whatever. Somebody else has to worry about that. You’re interested in your lines, in your character, and ‘Where am I now?’”

“In the state of New Mexico, involuntary manslaughter means unintentionally killing someone by being negligent. So negligence alone is the standard that you have to meet,” she said.

“Guns are used in movies every day and there are processes and steps taken,” she added.

When Behar returned to her question of why the other four producers close to the accident were let off the hook, Farah Griffin replied, “I’m not sure that they should be. It seems like there was a lot of safety recklessness on this set. There were live rounds co-located with fake ammunition.”

Alec Baldwin appears at the opening night of the new play “Hangmen” at The Golden Theatre in New York City on April 21, 2022.
(Bruce Glikas/WireImage)

Gabriel Hays is an associate editor for Fox News Digital.