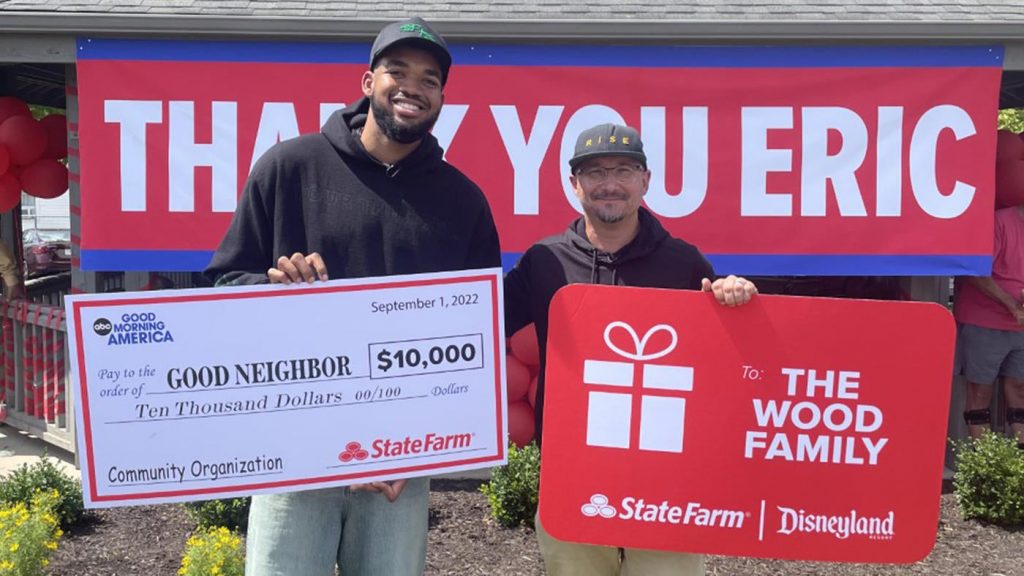 But Towns isn’t on his way to a playoff game or training camp with a Timberwolves team poised to make a significant leap in the Western Conference. Joy and enthusiasm swirl through his veins as he’s making the 2,000-mile trip from Los Angeles to Fort Wayne, Indiana (with a coincidental layover in Minneapolis) — all so he can deliver a gift to a man he’s never met.

“I just feel like my calling in life is to serve others and be able to be as unselfish as possible, so that’s just naturally who I am,” Towns told CBS Sports. “I just love helping people. It’s really one of my truest passions in life.”

Towns traveled to Fort Wayne to celebrate Eric Wood, a community superhero who organizes a group of over 1,000 volunteers throughout the Fort Wayne area that helps take care of the needs of their neighbors — everything from mowing lawns to household repairs to taking out the trash. Because of his service, Wood was recognized as part of Good Neighbor Month, a joint initiative from State Farm and Disney running throughout September to encourage people to “take action in their communities, unite neighborhoods and spotlight those making a positive impact.”

In front of dozens of members of the community, Towns and State Farm presented Wood with his own customized Marvel superhero comic book cover, along with a trip for his entire family to Disney California Adventure Park. Towns also handed him a check from State Farm for $10,000, to be donated to the charity of Wood’s choosing.

“There’s so much bad in the world and, you know, I wish there would be more showing the good that the world has,” Towns said. “I’m just very blessed that State Farm and Disney gave me a chance to show some of the good out there. …  I was so excited to get to Fort Wayne and be able to see Eric and be able to give him the moment that he deserves. He’s done so many amazing things in his community. He truly is the definition of a good neighbor.”

For Towns, this is nothing new. His desire to see others succeed has been ingrained in him since he was a child. It carries over from his personal life onto the basketball court, where he practices what he calls “servant leadership,” trying to set up others for success before himself.

“I find more joy in my life seeing people win than me winning,” Towns told CBS Sports. “The most memorable moments of my life were when I was able to help someone win, get the moment they’ve been yearning for, they’ve been trying to get, or seeing one of my friends accomplish something that he’s been working really hard at. I’ve always found more enjoyment in my life in seeing those things.”

That’s why Towns flew out to be a part of the celebration in Fort Wayne, and why he’ll continue to serve his community through organizations like the World Federation of Youth Clubs, with whom he just partnered. When asked about the super-max extension he signed with the Wolves over the summer that guarantees him nearly a quarter of a billion dollars, Towns didn’t talk about all the things he was going to buy — instead he discussed all the good that he could do with that kind of capital.

As for Wood, he’s not going to stop serving his community any time soon, and he hopes that his actions are able to inspire others to break down whatever barriers might be separating them.

“I think being a good neighbor has the potential to change the climate of our country,” Wood said. “It’s being willing to knock on a door, to see who’s home and what’s going on — to make sure someone’s OK.”