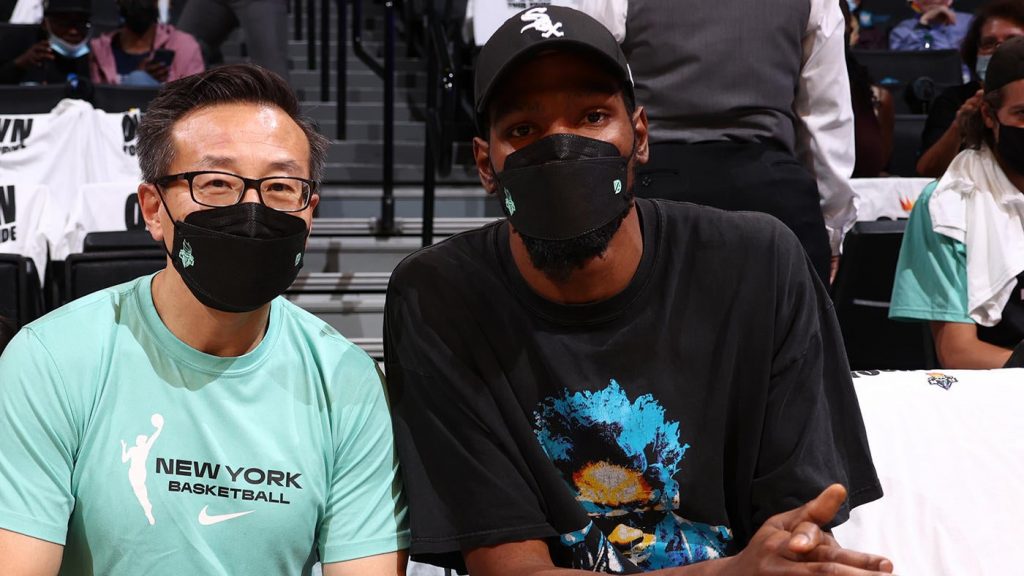 It’s been over a month since Brooklyn Nets superstar Kevin Durant requested a trade just hours before free agency started, and there hasn’t been anything to suggest that a transaction is imminent. In fact, there’s been a reported “pessimism” surrounding a deal for Durant getting done in the near future. The Nets are having difficulty finding other teams to help facilitate a trade, which given the high asking price for a player of Durant’s caliber, that’s not entirely surprising.

As we inch closer to the start of training camp, there’s always the possibility Durant could still be a member of the Nets when the 2022-23 season begins. However, during a face-to-face meeting in London with team owner Joe Tsai over the weekend, the former league MVP reiterated his stance that he still wants to be traded, according to Shams Charania. Durant’s stance hasn’t wavered at all through this whole process, but in a bit of new information, the two-time champion also told Tsai the Nets needs to choose between him and the tandem of head coach Steve Nash and general manager Sean Marks, per Charania. Durant reportedly doesn’t have “faith” in the franchise’s direction, and with the ultimatum that he’s now thrown down it throws a new wrench into Brooklyn’s plans going forward.

Tsai responded on Monday night by tweeting, “Our front office and coaching staff have my support. We will make decisions in the best interest of the Brooklyn Nets.”

While the Nets have fallen short of their championship aspirations in each season Durant has played for them, it’s surprising to hear he’s essentially calling for the dismissal of both Nash and Marks. Especially as it pertains to Nash, who initially received support from Durant in the hiring process due to the time the two spent together in Golden State. Nash has compiled a 92-62 record in two seasons with the Nets, including playoff appearances in both years. However, Nash’s tenure started off rocky when Irving said on Durant’s podcast that he doesn’t really see the team having a head coach in terms of leading the team, shortly after Nash was hired. Durant agreed and said the coaching could be a “collaborative effort” between Nash, Durant, Irving and even assistant coach Jacque Vaughn. While that could be read as the two star players just wanting to be vocal leaders for their team, it’s not exactly a ringing endorsement right after Nash was hired.

While Nash has put together back-to-back winning seasons, his coaching hasn’t exactly been blemish-free. Brooklyn’s defense has been heavily criticized in the past two seasons, and the isolation-heavy offense they ran wasn’t the most successful game plan. There were also reports surfacing that Nash’s coaching style was part of the reason James Harden requested a trade from the Nets. So while Durant initially supported Nash when he was brought on, there’s definitely reasons why that support may have dwindled.

As it pertains to Marks, it’s difficult to see exactly what issues Durant has with Brooklyn’s general manager, who is a well-respected front-office executive around the league. Just this offseason alone the Nets have made moves that have upgraded their supporting cast around Durant and Irving — should the two stay in Brooklyn — by adding Royce O’Neale, TJ Warren and re-signing Patty Mills. The team will also get a fully healthy Joe Harris and Ben Simmons to add even more talent around their two stars.

This new information about Durant reportedly forcing Tsai to choose between him or Nash and Marks certainly makes this entire ordeal more complicated, and we’ll have to wait and see if any other fallout comes from it.