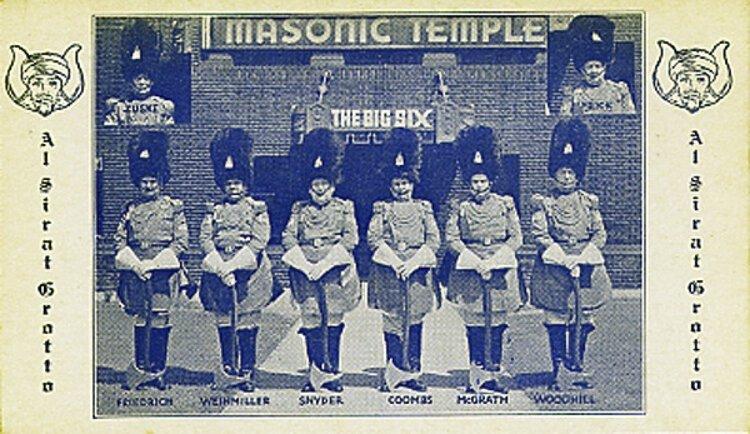 Freemasons, the oldest fraternal organization in the world that is committed to self-improvement, charity, and brotherhood, had a presence in Cleveland dating back to the early 19th Century when the city’s first lodge was organized in 1811.

Known as Concord Lodge No. 15, its charter was permitted to lapse in the face of Anti-Masonic movement prevailing in the 1830s. This situation was not permitted to last for long with Webb Lodge No. 14 being founded in 1836.

Cleveland Masons, ca.1941As the population grew and Freemasonry became more popular the number of lodges increased. By 1859 Scottish Rite Freemasons were established in Cleveland. The Scottish Rite traces its existence back to the massacre of the Knights Templar in Paris in 1307 when the survivors fled for their lives to Scotland and safety. Interestingly, this bloodbath took place on Friday, Oct. 13, 1307, thereby creating the tradition that Friday the 13th is an unlucky day.

In the early 20th Century, the decision was reached to build a Masonic Auditorium. Land was purchased at 3615 Euclid Avenue and the noted Cleveland architectural firm Hubbell & Benes was hired to design the structure.

To accommodate the new building, the former home of investment banker and industrialist Henry C. Wick was moved to a new location further north on East 36th Street. 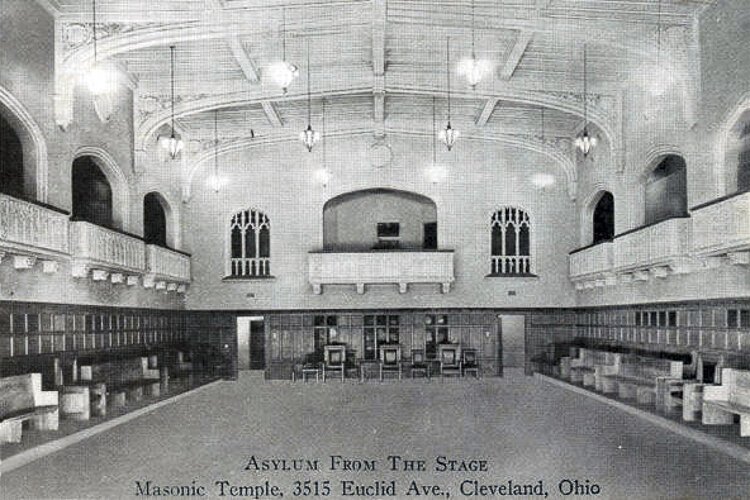 Masonic Temple Asylum, ca. 1930 The Masonic Auditorium looms to this day over its corner of Euclid Avenue at E.36th Street. Its vast expanse of relatively windowless brick walls gives it a fortress-like aspect to imaginative onlookers seeing it for the first time.

Rather stark and forbidding from the outside, the large building hosts a well-appointed auditorium and impressive meeting rooms noted for their beautifully executed woodwork.

In 1918 the newly-created Cleveland Orchestra made some of its earliest recordings in the auditorium—with the building’s outstanding acoustics leading some to argue that, as a music venue, it surpasses Severance Hall.  The building certainly provided a dignified venue for the Cleveland Orchestra for the first decade of its existence.

During World War II the building housed a large USO facility—with the war years seeing thousands of soldiers, sailors, airmen, and marines pass through its doors as they sought a moment of recreation while traveling through Cleveland.

The auditorium provided a home for a range of Masonic bodies, including the Al Sirat Grotto, Scottish Rite, Shriners, DeMolay, and Knights Templar.

These organizations are known for generosity and service to the community. Membership in them has been prized by generations of Cleveland men for whom it has been a longstanding family tradition.

Unfortunately changing demographics and dwindling numbers led to harsh realities, and it became necessary for the Masonic bodies to sell the structure they owned for the best part of 20th Century.

Masonic Rites are still performed in Masonic Auditorium—such as the Valley of Cleveland’s Scottish Rite Reunions customarily held twice each year. Although the building is under new ownership, the traditions of Freemasonry continue.

Far from being a secret organization, the presence of Freemasonry could hardly be more obvious, and Masonic Lodges across the Cleveland area welcome the interest of good men who wish to be better men, seeking more light through Freemasonry.