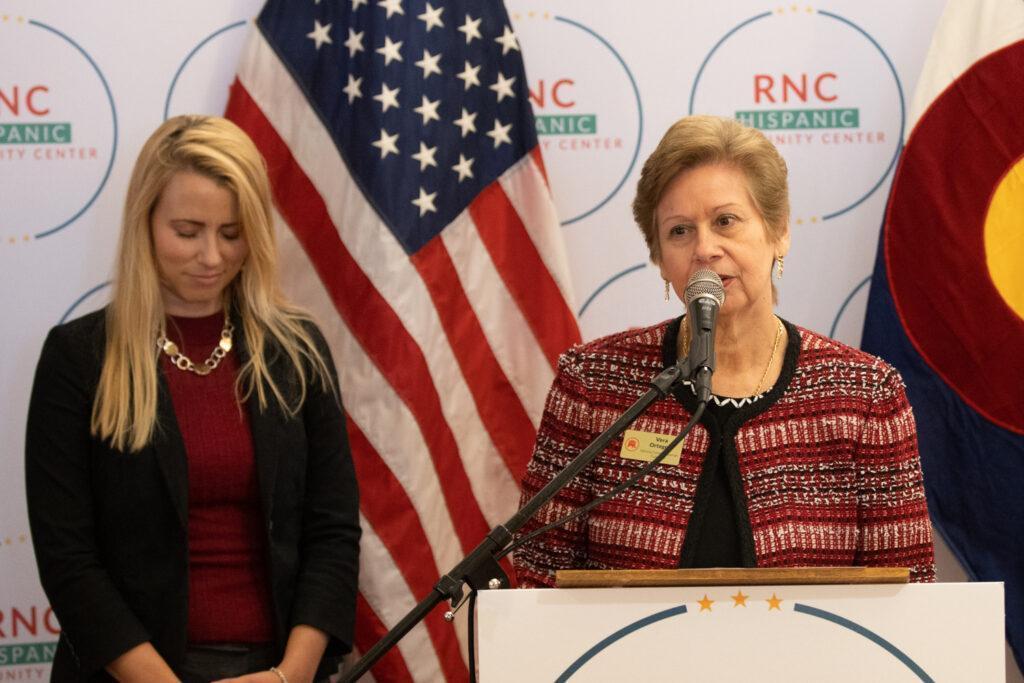 Stacy Suniga stood nervously outside a conference room at the University of Northern Colorado in Greeley last Thursday, hoping the room would fill up. Suniga leads the Latino Coalition of Weld County, and she was one of several hosts of a political candidate forum designed to draw in Latino voters. But she knew from her community outreach work that motivating voters was going to be an uphill battle.

“We found that there’s a lot of distrust among Latino groups to even be involved in the political process,” Suniga said. “I see Latinos disengaged with either major party,” or thinking their votes don’t count, she added.

She said she has felt that herself in northern Colorado.

“When you feel that your specific needs or cultural needs are not being met – they’re not even being listened to – you get disenchanted,” she said.

But she sees a particular opportunity in 2022. Colorado’s new eighth congressional district — added after the 2020 census —  is 38 percent Latino.

“Any disenchantment they had before, we really feel that CD 8 brings a new hope,” Suniga said. “Now that we have that district, we need to educate Latinos that it’s different.”

She helped organize Thursday’s forum to introduce Latino voters to candidates running for office, fight back against disenchantment, and get people interested in time for the November election.

She’s not the only one feeling optimistic.

“This is exciting!” said Polly Baca, her eyes lighting up.

Just inside the conference room, Baca was schmoozing near the refreshment table. She knows a thing or two about the importance of representation in Colorado politics. She was the first Latina elected to Colorado’s state Senate, and holds a number of other “firsts” in Democratic politics nationally.

“We came north to work in the fields, to do the menial labor,” Baca said. “Latinos have been in this area for centuries. And it’s the first time that you’ve seen Latinos – especially Hispanic women – running for the top offices in this district.”

The forum included Dr. Yadira Caraveo — who is running for Congress in the eighth district — as well as Latino and Latina candidates down the ballot, including State Board of Education candidate Rhonda Solis, CU regent candidate Yolanda Ortega, and state legislative candidate Ryan Gonzalez.

The forum did not draw as many voters as organizers hoped, but among those in the audience was Kaylie Aguilera, 25, from Greeley. She said living in the new congressional district makes her more energetic about this election and hopes to see more voter engagement.

The eighth congressional district has fewer registered voters than any other district in Colorado, but Kaylie says she sees more enthusiasm among her generation.

Moderators at the forum asked candidates about issues that Suniga said Latinos across the state identified as important. That included how to prevent gun violence, how to combat racism in policing, environmental protections related to children’s health, and federal immigration laws.

Katara Burrola, 28, is an organizer for Mi Familia Vota, a nonprofit that encourages Latino civic participation. She wondered how the candidates would address environmental racism, an issue her grandparents, who were migrant workers, introduced to her as a child. She said the new eighth congressional district is “everything” to her.

“This is our district, it’s a place where we get to have our community, have our way of lives, and also advocate for ourselves together as a whole.”

Candidates and parties — whether or not they are Latino themselves — are taking note of the growing Latino community, particularly in Colorado’s new eighth congressional district.

The Republican National Committee opened what the party calls a Hispanic Community Center in Thornton. Meanwhile, Republicans and Democrats have steering committees and advertisements aimed at Latino voters. And on Thursday, one Black and several white candidates were present to answer questions at the  Latino Issues Forum.

“I think there’s some outreach from political parties to engage with Latinos,” Suniga said. “We didn’t see that before. I don’t think it was felt that it was needed before.”

That’s just the beginning for her, though.

“The real question will be: who will continue that outreach after the votes have been cast?” she said.

In opening the community center, Colorado GOP chair Kristi Burton Brown said she hoped the party would keep it open after the election. That would be the type of permanent presence Latino leaders at the Greeley forum are looking for.

“I think Latinos are tired of hearing from elected officials who come into our communities, promise us something, then expect us to support them, leave, and forget about us,” said Milo Marquez, a director at the Colorado Latino Leadership, Advocacy and Research Organization, or CLLARO.

“It’s time that we start holding these elected officials accountable, and making sure we put them on record, so we can come back and decide, do we want to support this person, or are we going to choose another candidate in the future?”

Suniga will be watching for support and engagement after November.

“For years, we’ve had politicians speak about points and promise the world, and then, once they’re elected, they go to who they want to favor. Their stories change. Their priorities change.”

But the first step is convincing people to vote. Suniga wants Latinos in Greeley and beyond in the new eighth district to know that they have an opportunity to be heard, but they need to act on that opportunity to make it count.