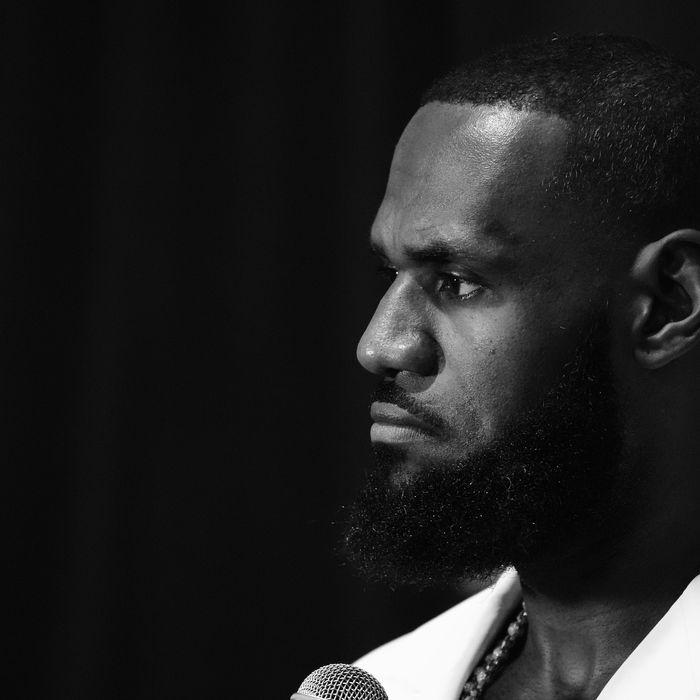 Remember when LeBron James was a reliable Fox News bogeyman? There’s a good chance you don’t; the concentric circle of readers who enjoy self-serious New York sports columns and Laura Ingraham viewers is probably small. But a few years ago, he briefly filled the always shifting role of liberal villain on Rupert Murdoch’s network.

Ted Cruz accused him of endangering cops. Enes Kanter Freedom labeled him an America hater. Tucker Carlson said he hates free speech and was “putting China first.” Clay Travis said he should “apologize to every police officer in America” (which seems potentially time-consuming). Most famously, Ingraham advised James to “shut up and dribble,” a phrase James repurposed as the title for a Showtime television series centered on his political activism.

But you don’t hear much about James on Fox News these days. The only time he has merited much commentary over the past few months came when the network aired a clip from his other show, HBO’s Uninterrupted, in which he said WNBA star Brittney Griner, still jailed in Russia, might feel as if America did not “have her back. The backlash to that out-of-context remark led him to clarify that he wasn’t “knocking our beautiful country.”

James hasn’t said a word about politics since then. In 2020, he and his voter advocacy group, More Than a Vote, were (somewhat exaggeratedly) credited with helping swing the presidential race Joe Biden’s way. Now we’re less than two weeks away from the midterms with a surprisingly competitive Senate race taking place in James’s home state of Ohio, where he led rallies for Hillary Clinton two days before the 2016 election. Not only has James stayed out of the race entirely, he didn’t even respond when the Republican candidate, J.D. Vance, called him “vile.” (Tim Ryan, the Democratic candidate, has been heaping praise on James to try to draw him in.) Perhaps More Than a Vote’s biggest success two years ago was voter mobilization in the state of Georgia, particularly during the runoffs that stretched into 2021; now, in the heat of another high-stakes Senate and governor race there, LeBron & Co. are nowhere to be seen.

This inactivity may not be a one-off. More Than a Vote, an organization I profiled for this magazine in March 2021, appears to have vanished from the internet entirely; it hasn’t even tweeted since January. (I’ve been told the organization is currently “dormant.”) The Shop: Uninterrupted is still on, but James was in only the first episode (the rest were hosted solo by his longtime business partner Maverick Carter), and the most recent episode featured David Beckham and James Corden — so, no, it’s not getting too political.

To pivot to actual sports for a moment, James is busy with problems of his own on the basketball court. It’s very early in the NBA season, but his Los Angeles Lakers have started 0-3 and are struggling with the same issues as last year: a thin roster, on-court disorganization, and, mostly, fallout from the disastrous decision to trade for faded superstar Russell Westbrook, who isn’t just old now but a terrible fit with the way James and Anthony Davis play. When you have players of James’s and Davis’s caliber — two Hall of Famers — you should be expected to compete for a championship every year. But since winning the title in the pandemic-era bubble two years ago, the Lakers lost in the first round in 2021 and didn’t make the playoffs at all (even missing the play-in game!) last year. Although James did play a major role in trading for Westbrook, these problems are hardly his fault as a player: He remains one of the five to ten best players in the sport, truly remarkable for a guy who is about to turn 38 in December. And there’s a tragic aspect here: He is doing something no player has ever done, and that feat is entirely wasted with this lousy team — a lousy team that’s the Lakers, for crying out loud, the franchise that’s supposed to be the crown jewel of the league.

So you can understand why that team would merit his full attention. But he’s hardly alone among athletes taking their foot off the gas for the midterms, at least compared to 2020. For instance, much was made of the NBA Social Justice Coalition, founded within the league by athletes including Donovan Mitchell and Karl-Anthony Towns after the 2020 protests. And while the organization has been dutifully tweeting about early voting and Griner, I haven’t heard a single player or coach mention these topics. The overall lack of engagement is palpable for reasons both big and small. For one thing, athletes are really busy — trust me, keeping their jobs is harder than keeping yours. And the fervor of 2020 has faded a bit for them, as it has for many of us. But you can also understand why James would want to take a step back, from a personal-sanity standpoint. It’s hard enough to figure out how to beat the Warriors without Carlson roasting you every single night. And surely athletes saw how much shit James was taking and concluded, totally understandably, No, thanks.

So, yeah: It’s hard to blame a guy with as many plates spinning as James for withdrawing from the political sphere, at least for now. But it’s not as if this moment is much less fraught than it was in 2020 or that James’s presence in public life is any less needed. The level of political urgency that took over sports in 2020 was probably unsustainable, particularly with Donald Trump out of office (for now!). But it would be a shame if all that momentum vanished so quickly, wouldn’t it? And besides: Getting yelled at by Carlson every night seems more pleasant than playing for the Lakers right now.

Daily news about the politics, business, and technology shaping our world.

By submitting your email, you agree to our Terms and Privacy Notice and to receive email correspondence from us.