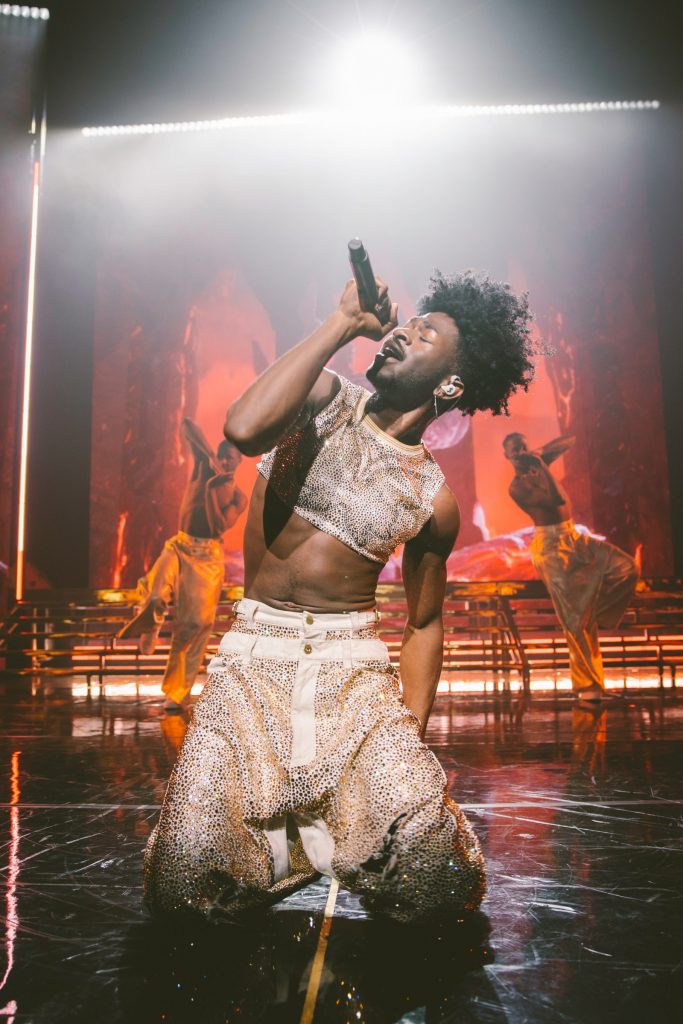 Lil Nas X, for all his chartopping in the nearly four years since he first posted “Old Town Road” to SoundCloud in late 2018, has never gone on a proper solo tour—that is, until last night, when he kicked off his debut Long Live Montero tour in Detroit. For the occasion, Nas premiered a custom wardrobe he created with the American fashion house Coach. It’s the latest in a long line fashion brands dressing famous musicians for their tours: think Harry Styles wearing custom Gucci for his Love on Tour dates, or Dua Lipa in custom Balenciaga, Mugler, and Dior for her Future Nostalgia run, or BTS clad in Kim Jones-designed Dior during their Love Yourself: Speak Yourself world tour a few years back.

The merging of a heritage brand like Coach and a cowboy from outer space-meets -Adam-minus-Eve dancing with the devil pop star like Lil Nas X may seem like an odd pairing at first. But both Nas—known offstage as Montero Hill—and Coach are linked by their own potent brands of Americana.

“Montero’s style is bold, and it’s boundary-breaking—and above all, it exudes confidence,” Coach creative director Stuart Vevers tells GQ via email. “The looks we created for the tour were not only inspired by that confidence he is known for, they were also made to tell different chapters of his story.” Vevers worked with Lil Nas X and his stylist Hodo Musa to build six bespoke outfits that “play on iconic references to American pop culture,” including a liberal use of the brand’s Signature monogram pattern. That, particularly, echoes hip-hop’s heritage of logomania, which the designer says they “juxtaposed in unexpected ways to show how Montero is creatively reimagining American pop culture today.”

And in any case, their link-up was pretty straightforward: “We’ve always been a fan of Montero and his approach to fashion that’s all his own—and he’s worn Coach before, and he always looks amazing,” Vevers said. “The creative conversations started and evolved from there.”

And though Nas didn’t ride out like a fabulous lone ranger on a Coach stagecoach, a leather Signature-monogrammed horse did eventually join him on stage. “Similar to my collections at Coach, Montero’s style explores familiar American touchstones like varsity and westernwear through the point-of-view of a new generation,” Vevers says. “The looks integrate our house codes, exploring references to American heritage, past, present and future with a sense of fluidity to tell Montero’s story of metamorphosis.”

A Coach press release notes that the tour is centered on Lil Nas X’s origin story, “from his beginnings to the fully realized version of himself—a story we hope inspires others. The acts within the performance show Montero at different stages of life and self-discovery, from birth, to childhood, to his emergence as an artist, to the full expression of who he is today.” Among them are a fuschia, crystal-encrusted padded football uniform and a gilded gladiator suit patterned with the Coach monogram, a slew of ones and zeros of binary code, and some tastefully abstract phalluses.