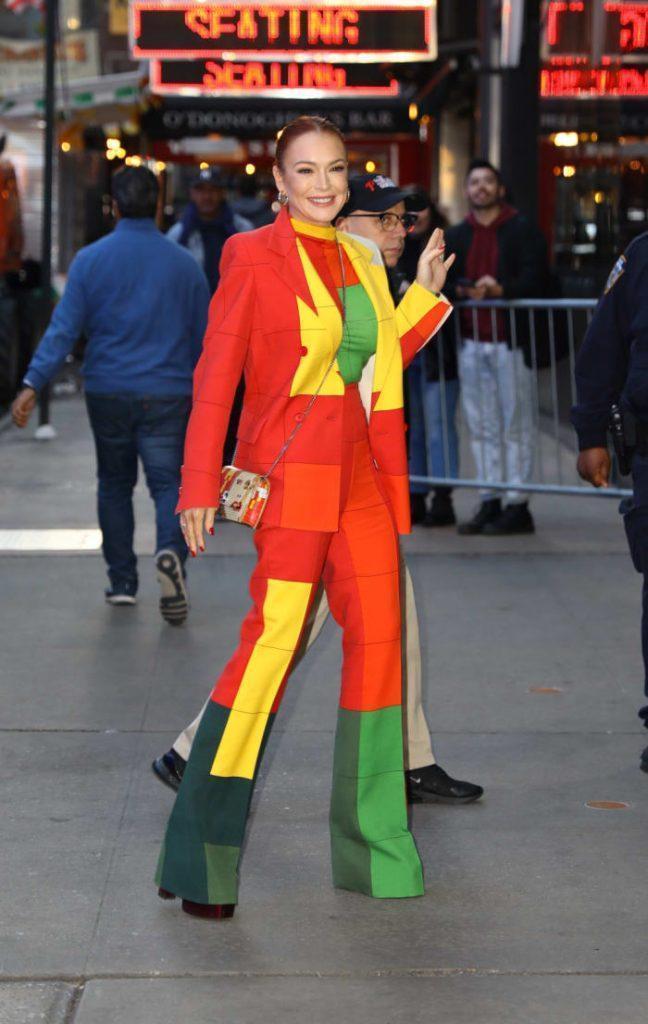 Lindsay Lohan made a statement in the streets of New York this week while on her way to appear as a guest on Good Morning America.

The former child star, now 36, absolutely popped in a colorful patchwork suit while posing for paparazzi on Wednesday, Nov. 8 as as she headed into the GMA studio in New York City.

Lohan looked stunning in the three-piece set, featuring a turtle neck top tucked into a pair of bootcut pants and finished off with a matching blazer, all color-blocked with vibrant shades of reds, greens and yellows.

Her fashion moment was complete with a matching cross-body bag as her hair pulled into a sleek bun for the outing.

Lohan appeared on the daytime talk show to promote her upcoming holiday film, Falling for Christmas, as part of her comeback to the screen since taking a step back from acting.

“It’s a great movie,” the Mean Girls actress told the hosts during Wednesday’s episode. “I wanted to make this movie because I missed being on set and I really miss bringing characters to life, and this was just the perfect script full of love and family and romance and joy all in one.”

“And it has a great message, which is that you don’t really need all of the material things in life,” she added. “It’s good to just  focus on the simple things, and I really love that.”

She also called the experience filming the movie “really refreshingly exciting,” after not appearing in a film for years.

Also during her appearance on GMA, Lohan opened up about her personal love life after quietly marrying partner Bader Shammas earlier this year.

“It’s amazing,” the Parent Trap star said of married life so far. “I’m really lucky. I found my partner and he’s an amazing man and we’re a great team.”

Lohan’s fans can catch her in the highly-anticipated holiday film Falling for Christmas, premiering on Netflix Thursday, Nov. 10.