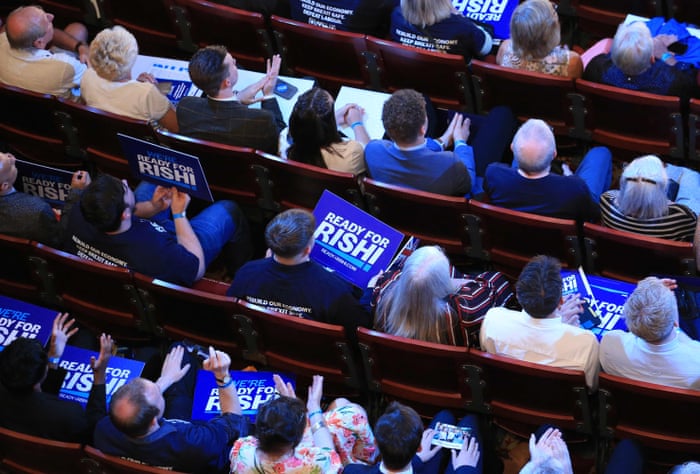 Here are the main points from the Tory leadership hustings in Darlington.

I don’t think that will be necessary because what we are talking about now … is the extra increase on top of what we thought. And we already thought bills were going to go up to £3,000 when we announced that support.

I want to go further than I did previously because the situation is worse. It’s right that we target that on the people who most need our help.

Although the May package was directed mostly at lower-income households, there was a universal element, because all households were offered £400. Asked if he would do this again, Sunak replied:

No, because I think what we need to do is target our support for the most vulnerable.

There’s a fixed pie, we have to share out the pie and we have to give out the money and hand out. My view is that we can grow the pie, and having lower taxes actually helps us generate more income into the economy so there is more money to go around.

What I fundamentally don’t agree with is putting up taxes and then also giving out benefits. I think that is the wrong approach.

She also described relying on cash payments as the main means of helping people with the cost of living as “Gordon Brown economics”.

Here’s the clip of the Truss/Newton Dunn exchange. (See 9.13pm.)

At least my colleague Jessica Elgot, who was covering the hustings, has found something joyous and uplifting to celebrate in Darlington.

The Sun’s Noa Hoffman heard Tom Newton Dunn’s reply to Liz Truss’s apology for being mean about the media.

Perhaps Truss was only trying to be conciliatory and polite. But it was also perhaps insight into how she is willing to stir up populist grievances (anti-MSM sentiment is a mainstream of populism, in both its milder and nastier incarnations) without really believing in any of it at all.

The questioning is now over. Newton Dunn asks for another show of hands from people who are still undecided as to whom they will vote for. He says only about 10% of people are raising their hands, compared with 40% earlier.

And that’s it. The hustings is over.

As she gets up to leave, Truss embraces Newton Dunn, and the microphone picks up her saying: “I’m sorry I was mean about the media, Tom.”

Q: Would you go ahead with plans to cut the size of the armed forces?

Truss says she is committed to reviewing the defence and security review.

Q: Speaking as a farmer, a lot of us are worried about the trade deals you have done. Will the meat coming into the UK be to the same standards as British meat?

Truss says she thinks British beef and lamb is world beating. She got it back into the US.

She is proud of the trade deals with Australian and New Zealand, she says. She says she is glad the UK has righted the wrong done in the 1970s (when the UK entered the Common Market, hitting exports to the UK from Australia and New Zealand.)

Q: How are you going to get civil servants back into the office when people at the top are all remainers?

Truss says she is good at getting things done.

Q: Under the Gender Recognition Act, people can change sex. Would you change that?

Truss says the act allows people to change gender, but that is not the same as biological sex.

Truss says there are “real issues on the frontline” with the NHS. She says its budget would have to go up in real terms. And she says would appoint a really good health secretary.

Q: Rishi Sunak? It has been rumoured it could be him.

Truss says she does not want to get ahead of herself.

Truss says she would be willing to serve in a Rishi Sunak cabinet. She says she may have disagreements with him, but she prefers him to Keir Starmer.