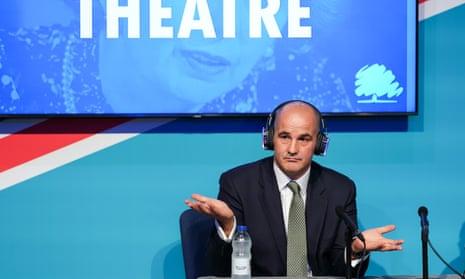 Liz Truss gave broadcast interviews today as she visited a construction site in Birmingham with her chancellor Kwasi Kwarteng.

Asked if she had confidence in her chancellor, the prime minister twice refused to say so. Here she is being interviewed by Sky News:

Tory members have been using a meeting with their party’s chairman to vent their frustration at MPs affecting their local campaigning efforts.

One Conservative member told Jake Berry they are “sick and tired” of having to answer questions about MPs’ actions while canvassing for local votes.

Another said that “what was going on down in London” – hinting at the scandals which brought down Boris Johnson’s government – had turned a previously safe seat in their area into a marginal one.

At a Conservative Party conference fringe event where members were able to meet the new party chairman, Woking Borough Councillor Melanie Whitehand said: “I am sick and tired, when we go around canvassing, every time what gets pulled up is what is happening in Government.”

“Although we say local issues for local politics, it absolutely gets drowned out by whatever the MPs are doing in the chamber.”
She added that MPs are “selfish” and “not paying mind” to the Tory party members who helped get them elected.”

Berry replied that “every Member of Parliament should be canvassing regularly with their council team”, as he does.

He said: “I don’t have to rely on my council colleagues coming to me and saying ‘Do me a favour, will you? Just shut up in Westminster and will you let us get on with winning our local election’, because I hear it directly from the voters.”

The new chair of parliament’s environment, food and rural affairs committee (EFRA) has made a veiled reference to Carrie Johnson, who lobbied her husband Boris for animal welfare legislation when he was prime minister.

We need to reassure that while before the people who held sway with the previous administration here in the UK in terms of animal rights, that the view of the minority will be listened to, and support them when you start talking about people’s right to shoot.

MP Fay Jones said the recent debate about the new farming subsidies in the Conservative party had been “deeply unhelpful” but added that the party should “not be dancing to the tune of environmental NGOs”.

Liz Truss gave broadcast interviews today as she visited a construction site in Birmingham with her chancellor Kwasi Kwarteng.

Asked if she had confidence in her chancellor, the prime minister twice refused to say so. Here she is being interviewed by Sky News:

Kwasi Kwarteng’s longest public appearance at the Conservative party conference will not be on the main stage, where he spoke for 20 minutes on Monday, but at a fringe event hosted by two thinktanks on Tuesday afternoon.

For an hour, the “person responsible for the UK’s economic future”, as the event bills it, will outline his vision in a conversation with the TaxPayers’ Alliance and the Institute of Economic Affairs (IEA). It will be longer than his 25-minute “mini-budget” speech and his “quarter of an hour – or maybe a bit longer” with party donors after the mini-budget.

Mark Littlewood, the director general of the IEA, will be one of Kwarteng’s interviewers, speaking to the man responsible for implementing “Trussonomics”.

The IEA has faced criticism over a lack of transparency over its donors, and a 2019 Guardian investigation found it had historically issued publications arguing climate change is either not significantly driven by human activity or will be positive.

Another charity has joined calls for reassurances that benefits will not face what effectively will be cuts if increases do not keep pace with inflation.

The chancellor yesterday pledged to always be on the side of those who need help the most, but this is contradicted by the prime minister’s failure to commit to uprating benefits in line with inflation – the bare minimum government could do to show it recognises the hardship faced by people bearing the brunt of the cost of living crisis.

We’re growing ever more concerned that there is a lack of understanding at the heart of the debate about who is going to be impacted by this.

Sir Iain Duncan Smith has called for a further taper rate reduction and suggested the government should invest in universal credit.

Speaking at a fringe event at the Tory conference, the Conservative former leader and work and pensions secretary said he was “pleased” former chancellor Rishi Sunak lowered the taper rate, adding: “I think it should come lower in due course.”

There’s not a better incentive than if we think for people as we have been arguing this week that lower taxes produce growth, then why would it be different for people on benefits?

The Liberal Democrats have made calls for Liz Truss and Kwasi Kwarteng to have their pay docked following their “gross mismanagement of the public finances”.

The party says it will table a censure motion in parliament calling for action against the prime minister and the chancellor.

That this house censures the chancellor of the exchequer and the prime minister, for their handling of the UK’s public finances, which has dramatically increased households’ mortgage costs and threatened pension funds; and believes the government should halve the chancellor’s additional ministerial salary, and halve the prime minister’s additional salary this year, as a result of this gross mismanagement of the public finances.

Away from the Tory Party conference, the chair of the Covid-19 public inquiry has said that bereaved families and those who suffered will be at the heart of its inquiries, as she promised to be “fair” and “thorough”.

Former court of appeal judge Lady Heather Hallett opened the inquiry in London saying she planned to investigate the UK’s preparedness for a pandemic, the government’s response, and its impact on patients, NHS and social care staff and the public.

A minute’s silence was held for those who lost their lives, with Hallett saying:

There’s one word that sums up the pandemic for so many, and that is the word ‘loss’.

Although there were positive aspects of the pandemic, for example, the way in which communities banded together to help each other and the vulnerable, millions of people suffered loss, including the loss of friends and family members; the loss of good health – both mental and physical; economic loss; the loss of educational opportunities and the loss of social interaction.

Those who are bereaved lost the most. They lost loved ones and the ability to mourn properly.

Hallett said the inquiry would analyse how the Covid pandemic unfolded and would determine whether the “level of loss was inevitable or whether things could have been done better”.

Referring to the controversy surrounding Partygate, a member of the audience at a Tory conference fringe event on rebuilding trust after the Johnson era has claimed that a “drinking culture” within the civil service was at fault and needed to be cleaned up.

Responding to him, Dave Penman of the FDA union said:

Jeremy Wright, a Tory MP and former minister, backs him up:

The same event was told that trust among the public towards government was at a level that was last seen in the aftermath of the Iraq war.

“The Blair years were a really good example of people saying: well they are not going to be any different,” said Dr Susan Hawley of Spotlight on Corruption, who also warned that polling had shown some very authoritarian instincts and reactions from the public in the wake of the decline in trust.

Challenged over whether borrowing to buy years’ worth of gas at almost record-high prices is a good deal, Truss has told broadcasters in Birmingham:

I have not signed any deal. But what I’m saying is that Britain’s energy security is vital and what we will be doing is always looking for value for money, of course we will, but it’s important that we have that long-term energy security.

Asked if the markets will be happier with more borrowing, Truss said:

This is speculation, you know, no deal has been signed. But as I’m very clear about, we are completely focused on fiscal discipline.

We will be bringing down the debt as a proportion of GDP over the medium term, but making sure we’ve got energy security is clearly vital for our country.

Civil servants are tired of ministers saying one thing in private about the work of civil servants and then “denigrating” them in public, a fringe event on rebuilding trust after the Johnson era has been told by the head of a union which represents senior civil servants.

Two things could be done that would help rebuild trust among civil servants, said Dave Penman, the general secretary of the FDA union

That is: stop attacking them and introduce the sort of independent and transparent process that the committee for standards in public life have talked about and which has been introduced elsewhere.

Penman also recalled the reports that Downing Street at the time of Boris Johnson’s premiership had a “hit list” of permanent secretaries it would like to replace.

Something that had come up “time and time again” was the conduct of some ministers in the workplace, said Penman, instancing Jacob Rees-Mogg’s post-it notes on the desks of civil servants who were working at home or were not in the office due to other duties at that time.

Rees-Mogg was called “condescending” earlier this year after leaving notes deemed to be passive-aggressive on civil servants’ desks in an effort to stop them working from home.

As part of his campaign to push workers back into offices, the cabinet minister has toured Whitehall buildings and published a league table of government departments based on how many staff are present.

Referring also to the most serious of allegations about the behaviour of ministers and MPs, he added:

As we saw in the scandal that erupted around Westminster around the MeToo movement there are times when politicians’ conduct falls below that which is acceptable in any workplace but they are not employees and it is a process essentially of self-regulation.