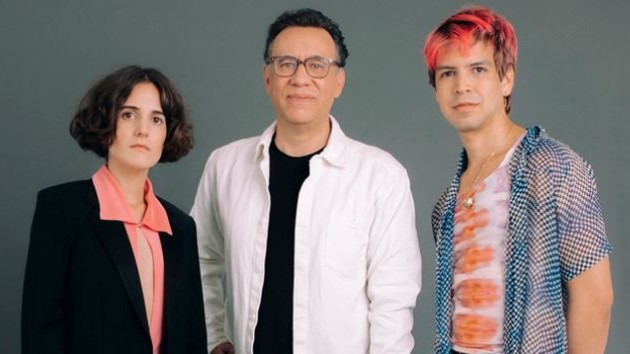 That said, it’s a little hard to describe, even for its creators. “I mean, the basic [pitch] is like sort of like, ‘Four friends put together a group that are hired to fool people,'” Armisen tells ABC Audio, admitting that falls short.

“I know, it feels so hard to distill,” Fabrega agrees.

“That’s why the elevator pitch would need, like, an emergency stop and like, ‘Okay, I need a few minutes to describe this,'” she says with a laugh.

The basic premise is sort of like if the Scooby-Doo gang pulled off hauntings instead of solving them, but the comedy quickly built its own madcap world.

“The show just kept evolving and evolving…and it just got more and more absurd because that’s our shared sensibility,” Torres explains.

For Armisen, who is partially of Peruvian descent, producing the show gave him a unique opportunity to bring a different comedic voice to a mainstream American audience.

“It was mostly about just wanting to see a culture in a part of Latin American culture that we don’t see very often, which is something a little more fantastical…,” he explains. “That was the thing that was a sort of launching pad. But from there, it just became something…much deeper.”

Fabrega agrees, adding she’s happy the show is restarting during Hispanic Heritage Month. “It is really fun to kind of show…like a different take of Latinx representation,” she says. “…I think it’s very freeing to show like, yeah, there’s all different sort of walks of life under the enormous umbrella that is ‘Latinx.'”