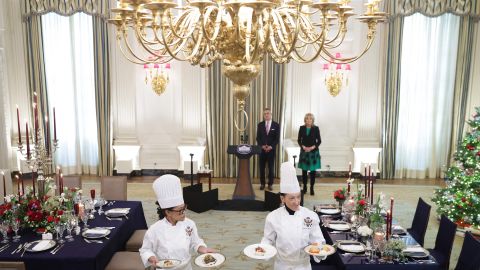 US President Joe Biden and French President Emmanuel Macron are taking part in a joint news conference at the White House, where the pair are discussing what was brought up during their Oval Office meeting earlier in the day and placed special focus on their discussions about the ongoing war in Ukraine.

“We talked a lot about that in our bilateral meeting, and we’ll continue to strongly support the people of Ukraine as they defend their homes and their families, and their sovereignty and territorial integrity against Russian aggression, which has been incredibly brutal,” Biden told reporters. “I knew Russia was, but I didn’t anticipate them being as brutal as they’ve been doing…today, we reaffirmed we’re gonna stand together against this brutality.”

The French president’s trip to the White House alongside his spouse, Brigitte Macron, marks their second time as the guests of honor for a state visit, having first done so during Donald Trump’s administration in 2018. Thursday’s agenda for Biden’s first state visit since taking office has been filled with formal fanfare, with a list of events intended to highlight the strength of the critical relationship between the US and its oldest ally.

At the start of the news conference, Biden called the US and France the “strongest partners and our most capable allies,” taking care to note that “Emmanuel has also become a friend, as well as President of that great country.”

In his opening remarks, Macron praised Biden for fulfilling campaign commitments linked to addressing international challenges, saying “we’re being able to re-engage with you.”

“I can only tell you once again how pleased we were with your choices that very much matched your history and your campaign commitments. The fact that you’re back on international challenges such as health and climate – it is really a New Deal,” the French leader said.

Earlier Thursday morning, the Macrons had stepped onto the South Lawn of the White House for an official arrival ceremony, where a long slate of top French and US officials as well as thousands of other attendees greeted them. The pomp-filled program included military honors, a 21-gun salute, both countries’ national anthems, a review of troops and remarks by both leaders.

During the ceremony, Biden referred to the Macrons as “close friends,” remarking that it is a “genuine honor to host you for the first state visit of my administration and to celebrate the current strength and vitality between France and the United States of America.”

France, Biden said, is the United States’ “oldest ally” and an “unwavering partner,” referencing the history of the relationship from Lafayette to the beaches of Normandy. He said the alliance will “grow stronger for decades to come.”

Macron referenced common values of the US and France, referring to the nations as “sisters in the fight for freedom” and calling for their countries “to become brothers in arms once more” in the midst of Russia’s war in Ukraine.

The Macrons’ return for another state visit also follows a dramatic bounce-back in US-French relations compared to just a year ago, when Macron took the extraordinary step of recalling his ambassador to Washington over a US-Australia submarine deal that blindsided the French and cost them a multi-billion dollar defense contract. The rift appears to largely be behind them, and Biden and Macron have deepened their ties even more over the last year in their united efforts to combat the war on Ukraine.

Elysée announced that Macron gave the president four gifts: a vinyl and CD of the soundtrack to the film the first couple saw on their first date – “Un Homme et une Femme”, a cup from the house Christofle symbolizing links between France and the US, a sweater from the House Saint James and a watch from LIP Horlogerie. He also gave the first lady copies of “Madame Bovary” and “The Plague, The Fall, Exile and the Kingdom, and Selected Essays.” He gifted Vice President Kamala Harris a model of the Ariane 5 rocket – a reference to common interests on space shared by the US and France.

The American president and first lady presented a custom mirror made of fallen wood from the White House grounds that’s a reproduction of a mirror that hangs in the West Wing, according to the White House. Additionally, the French president was gifted a custom vinyl collection of great American musicians along with “an archival facsimile print of Thomas Edison’s 1877 Patent of the American Phonograph,” the White House said. And the first lady gifted Mrs. Macron a pendant necklace designed by a French-American designer.

After the official arrival ceremony at the White House, Biden and Macron began bilateral discussions for an Oval Office meeting which lasted just under three hours. Kicking off the meeting, Biden reiterated the importance of the alliance.

“Things are changing rapidly, really rapidly. And it’s really important we stay in close communication. Doesn’t mean that every single solitary thing we agree on. That does mean we agree on almost everything,” he said, adding that they would work toward strengthening “security and prosperity.”

Macron said the Russian invasion in Ukraine will be one of their main topics of discussion and that “sustainable peace” is about respecting sovereign nations.

US and French officials had not expected the visit to yield any major deliverables, but both sides see it as an opportunity for the two countries to deepen their partnership on a slew of global challenges. The two sides expected to advance working group discussions that were launched in the wake of last year’s submarine affair to step up cooperation on space, cyberspace and energy issues.

Of particular note, the two leaders wrote they “strongly condemn Russia’s illegal war of aggression against Ukraine and stress that intentionally targeting civilians and civilian infrastructure constitutes war crimes whose perpetrators must be held accountable.”

On the Indo-Pacific, the two leaders pledge to “continue to coordinate on our concerns regarding China’s challenge to the rules-based international order, including respect for human rights, and to work together with China on important global issues like climate change.”

There are areas of disagreement that were expected to come up.

One of the biggest points of tension will be over billions of dollars in electric vehicle subsidies included in the Inflation Reduction Act, which applies only to those manufactured in North America. Macron has slammed the measure as protectionist and French officials said he intends to raise the issue in meetings with Biden and congressional leaders. During Thursday’s news conference, Biden confirmed that they discussed the matter in detail.

In their joint statement, the US and France said they “reaffirm their shared goal of accelerating the global green energy transition. They look forward to the work of the U.S.-EU Taskforce on the Inflation Reduction Act to further strengthen the U.S.-EU partnership on clean energy and climate through mutually beneficial ways.”

On Thursday, Jill Biden and Brigitte Macron also visited Planet Word, a language-focused museum in Washington. A French official has said that President Macron is expected to attend a lunch at the US State Department and meet with a bipartisan group of congressional lawmakers.

Thursday evening, the Macrons will return to the White House for the first state dinner of the Biden administration. French guests include film director Claude Lelouch, Louvre Museum Director Laurence des Cars and LVMH CEO Bernard Arnault, according to the French official.

The White House has not unveiled who they have invited to attend Thursday evening’s lavish dinner, but said in a preview that New Orleans native Jon Batiste will perform musical selections.

On Wednesday, Harris welcomed President Macron to NASA to celebrate the cooperation of both nations in space. The first family also held a private dinner with the Macrons ahead of Thursday’s formal state dinner.

During the last leg of their US visit, the Macrons will travel to New Orleans on Friday to highlight new efforts to expand French language education in the US.

This story and headline have been updated with additional developments.