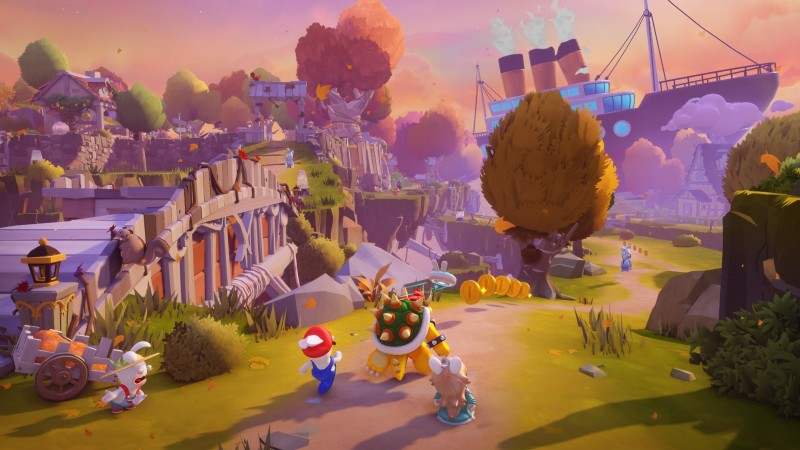 2017’s Mario + Rabbids: Kingdom Battle pleasantly surprised players by deftly combining two very different universes and utilizing the unexpected template of a turn-based tactics game. Five years later, a sequel, Sparks of Hope, launches on October 20 and builds upon the winning formula while also shaking up the foundation to make it more than a retread.

Speaking to the game’s associate producer Christina Nava, Ubisoft was pleased as punch at Kingdom Battle’s success and how it entertained turn-based strategy fans and non-fans alike.

“We were particularly happy by the fact that we saw many players who were not too used to the tactical genre tackling the genre and enjoying it, even if at first they wouldn’t have believed that,” says Nava.

To that end, Ubisoft wants to widen the net further with Sparks of Hope by ensuring its mechanics appeal to even more players. The game ditches grid-based movement. Players can now navigate characters freely around the battlefield in real-time, though a hero’s movement range still limits them, and Sparks of Hope remains turn-based. Nava says the experience sticks to its strategy roots and that the new system adds dynamism to encounters while making it easier for newcomers to grasp. Additionally, players can now have any combination of characters for their team. Kingdom Battle forced players to have at least one unit representing both franchises, but now you can have an entire party of Mario all-stars, a gang of Rabbids, and any mix between.

The story finds Mario, Luigi, and Peach traveling through space alongside their Rabbid counterparts, only to find the galaxy in peril. An evil entity called Cursa has begun taking over the cosmos. Its malevolent reach plays no favorites, brainwashing Bowser’s army to use as its own. Because of this, Mario’s arch-nemesis begrudgingly joins your ranks alongside two other newcomers: Rabbid Rosalina and Edge, an original Rabbid shrouded in mystery.

Nava wasn’t willing to share many story details (especially regarding Edge) but did open up about what these new faces bring to the battlefield. The not-so-enthusiastic Rabbid Rosalina, whom Nava describes as being “really jaded and exhausted all the time,” wields a plushie that fires bullets, making her a good ranged fighter. Her signature technique unleashes a wide-reaching status aliment called stasis, which immobilizes enemies within its radius and prevents them from attacking or using techniques.

Bowser sports destructive explosion-based abilities. For example, he creates a shockwave when he lands from a jump and comes armed with a rocket launcher-style gun dubbed the “Bowzooka.” This weapon fires magma rocks that incinerate targets. Bowser can also summon Rabbid Koopa minions that swarm targets until they blow up.

The swordswoman Edge is a pure fighter, meaning she’s not capable of healing or protecting other units. Her large sword allows her to slice multiple enemies in one swing (provided they’re close enough). Her Storm Blade technique essentially functions as an overwatch; any foe approaching Edge while Storm Blade is active causes her to strike them instantly.

The game’s namesake Sparks serve as the game’s other significant addition. Equipping these Rabbid-infused Lumas bestows various effects on heroes, and characters can hold up to two of them. Sparks can raise defenses, and augment attacks with elements such as shock, burn, freeze, or even a health-leeching vampiric trait, among other powers. Given their might, the Sparks also play an important, unknown role in the game’s narrative.

“[Sparks] really allow the players to experiment on the battlefield with different combinations,” Nava explains. “Especially by analyzing the battlefield and seeing which kind of heroes and enemies are there. And so, playing with the weaknesses and strengths of the enemies, you can choose the right combos and more efficiently defeat [them].”

Sparks of Hope goes cosmic by letting players explore multiple planets, the scale Nava describes as “an open-world within each planet.” The worlds we glimpsed had familiar themes, such as a lava-laden fire world, a snow-covered frost planet, and a lush tropical jungle. Players can freely roam each destination, and each planet sports plenty of side quests and other activities to tackle at your leisure.

“You will find mysteries, and you will solve the environmental puzzles,” says Nava. “You will find secret caves and vaults where you will find new items and weapons. So there is really, really plenty to do even outside of combat.”

The footage we watched showed the gang solving various puzzles; one involved the constellation of the night sky. Another had players manipulating water levels in a temple. The classic blue coin minigames from the Mario series return as well. You can also directly interact with the world in more minor ways, such as shaking trees to drop star bits.