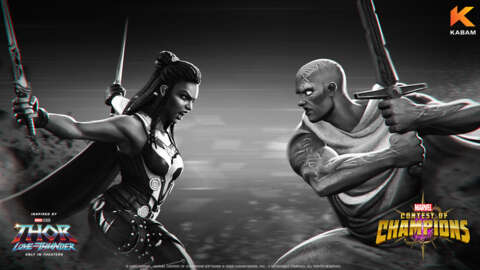 Marvel’s mobile fighter game Contest of Champions is getting ready to celebrate the release of Thor: Love and Thunder on July 8, with two new champions Gorr and Valkyrie. All players who log in during the event will also be able to pick up either Ragnarok Thor or Jane Foster’s Thor for free.

The event will start on July 8, the same day Love and Thunder premieres in cinemas, and will run until August 2, giving players plenty of oppotunity to pick up a version of Thor for their login reward. Players will also have a chance to pick up the two new characters–Valkyrie and Gorr the God Butcher.

Along with the new champion trailer, studio Kabam has released these bios for the new characters, who feature in the Taika Waititi film:

“Gorr the God-Butcher grew up on a harsh world, where belief in the gods kept his people from falling to despair. But after his family perished to the deadly environment, Gorr became disillusioned and swore vengeance against the gods that never came to help him or his people. He later obtained the powerful Necrosword, and gained the ability to control dark magic and shadowy constructs. He uses these powers to wreak havoc, destruction, and death on any and all that would call themselves gods.”

“Former leader of the mighty Valkyrior, and recently crowned sovereign of New Asgard, Valkyrie has long been a bastion to the Asgardian people against the evils of the Nine Realms. Possessing superior strength (even among Asgardians) and armed with the powerful weapons, training, and tactics of the Valkyrior, she is an excellent leader, and a steadfast warrior. Her conviction, though scarred by loss, is stronger than ever, and she is ready and willing to protect the Asgadians of the Battlerealm.”

The two new characters join over 200 champions already available in the game, which can be downloaded for free on either Android or iOS.

For everyone who’s looking forward to the release of Thor: Love and Thunder, initial impressions of the film are generally positive, promising more of everything fans loved about Thor: Ragnarok with the addition of Natalie Portman and Christian Bale.